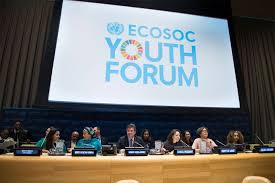 Youth climate activists have become valuable proponents of climate change solutions and catalysts for action, noted high-level delegates from the UAE government and the United Nations at a Youth Dialogue session on day one of the Abu Dhabi Climate Meeting (ADCM).

The meeting, hosted by the Ministry of Climate Change and Environment (MOCCAE) on behalf of the UAE, serves as a prelude to the UN Climate Action Summit 2019, set to take place from September 21 to 23 in New York.

Running until July 1 at Emirates Palace Abu Dhabi, the event has drawn the participation of representatives of the public and private sectors from across the globe and articulates the concerns of the young generation. The UAE as host nation is represented by a delegation that comprises young government sector representatives as well as youth from the civil society and the private sector.

With over 2,000 attendees, the Youth Dialogue session provided a platform for young people to discuss their role in climate action. It also explored new opportunities to partner with government and non-government organizations, leverage social media to raise environmental awareness and drive sustainable development to achieve economic growth.

The theme of the session, ‘Enabling Youth in Climate Action’, resonates with the youth-driven climate movement that is currently sweeping the globe from Southeast Asia to North America and demanding immediate action from governments and corporations. Largely inspired by young climate activists’ personal strikes for climate action all around the world in recent months, the youth movement highlights the collective environmental conscience of this demographic and its desire to be a part of the solution.

During the session, António Guterres, UN Secretary-General, said: “Young people need to speak up, push and ask for more. We need more ambition from a strong voice. Young people need to organize themselves, ask for institutional presence, and bring their families onboard. Only then will governments around the world comply. In a digital age, youth needs to start using social media to its advantage, because public opinion is shaped through digital instruments. It’s time for the youth to participate and revolutionize the world, to agitate people and make as much noise as possible. If we don’t do so, we will destroy the potential for people to live decent lives in the future.”

Speaking on the role of the youth in climate action, Dr Thani bin Ahmed Al Zeyoudi, UAE Minister of Climate Change and Environment, said: “The UAE has always held its youth in the highest regard, because we believe young people are the greatest change agents and strongest citizen diplomats. In order to facilitate youth engagement in sustainable development, the UAE government has launched dedicated strategies, such as the UAE Youth Global Initiative and the Emirates Youth Climate Strategy. The UN’s ambitious 2030 Agenda requires coordinated efforts locally and internationally, across all sectors and by all actors, but particularly from the youth.”

Shamma bint Suhail Faris Al Mazrui, UAE Minister of State for Youth, said: “About 49 percent of the global population is under the age of 35, which is why young delegates must have a say in their future and get involved in implementing plans. This year’s approach is different, because the UAE government and the UN have put young people at the heart of their decisions. Young people understand the realities of climate change, and ultimately they will have to live with its consequences.”

She added: “We need collective action now. The key word in climate action is to act – if we do not make the change quickly, global hunger, floods and fires will be the new norm. Climate change literally saves lives, and it is the youth that brings us the business of possibility. It’s time to debunk the myth that young people are too inexperienced to help in the battle against climate change. It’s time to change from a grey economy to a green economy.”

For her part, Jayathma Wickramanayake, the UN Secretary-General’s Envoy on Youth, said: “Young people are demanding urgent climate action from their leaders. Statistics show that 50 percent of our population is under the age of 30, and 90 percent of these young people live in developing countries. Climate change for them is not a concept they read – this is a reality that they experience daily living in vulnerable communities. Our youth are not just complaining, they are also acting, inspiring and leading the change by changing their lifestyles to combat climate change. In the end, it’s not just about climate action – it’s also about climate justice.”

The Abu Dhabi Climate Meeting aims to review and finalize the initiatives, commitments, and achievements that will be announced at the upcoming UN Climate Action Summit, as well as to examine key opportunities and challenges related to global climate action.

Sidney Powell warns states not to certify election results: “They are certifying their own fraud”