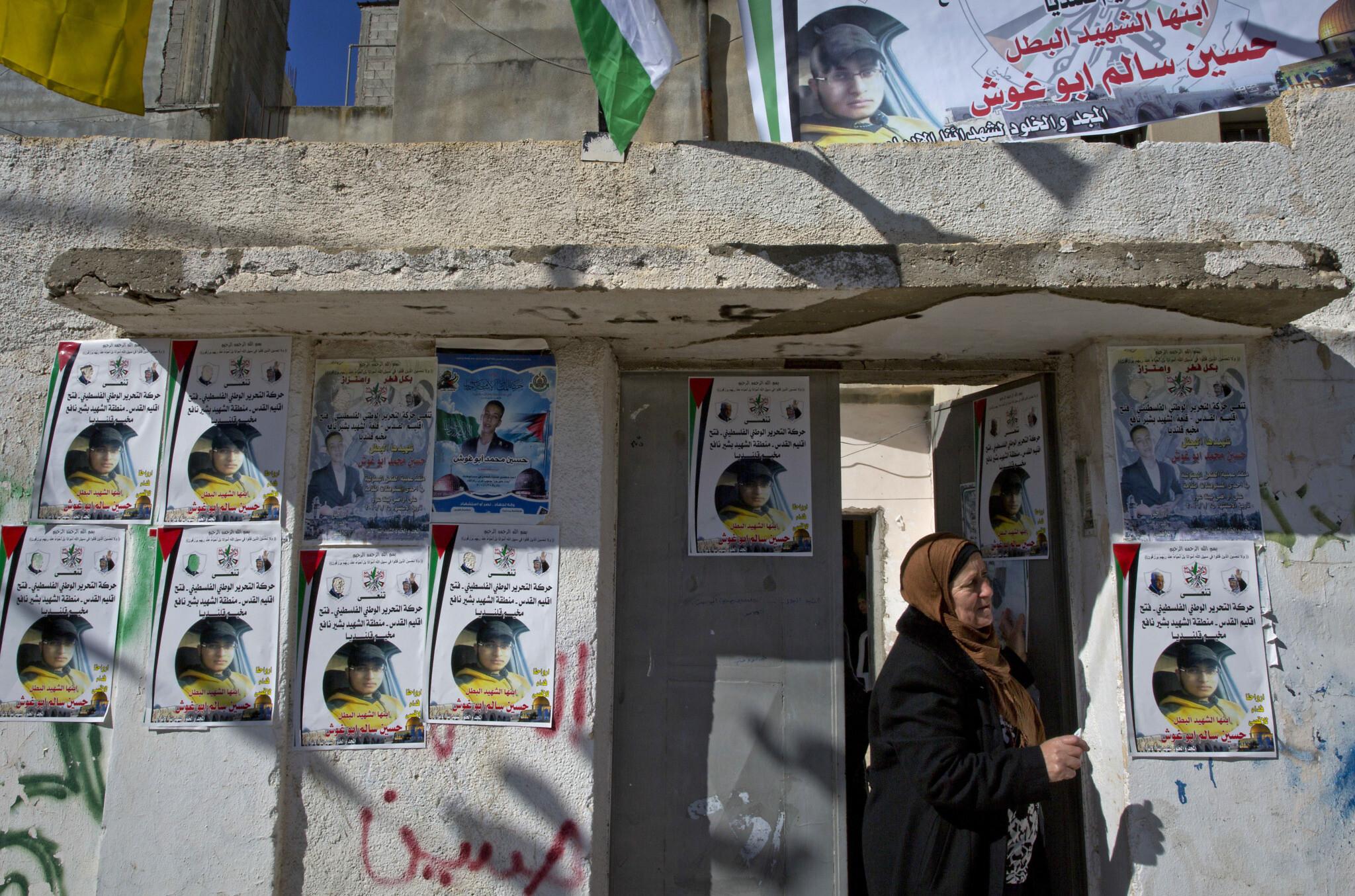 Image credits: The West Bank is bracing itself for another round of violent confrontations with the occupation as PNA rule wanes. [AP Photo/Nasser Nasser]

JENIN REFUGEE CAMP, West Bank - It is just after midnight. Young men gear up in black shirts and black face masks, tie ribbons with militant group insignia around their foreheads, and parade their weapons through the narrow streets.

Israeli officials fear that the black-market AK-47s, pistols, Kalashnikovs and M16s on display in the Jenin refugee camp will be directed at Israelis during the Jewish holidays that begin next week, as they brace for a new chapter of violent Palestinian resistance. Expectations of the passing of Palestinian Authority President Mahmoud Abbas - the deeply unpopular, heavy-smoking 86-year-old autocrat who is believed to be in ill health - have already sparked a bloodier social order in this occupied city.

In Abbas's wake, "there will be fauda" - "chaos" in Arabic - said Mohammad Sabbagh, head of the People's Services Committee of the Jenin refugee camp.

"This is the beginning," he said.

Thousands of young people in Jenin are on Israel's terrorism watch list, making them ineligible for work permits in Israel that would allow them to make a living. And they have watched as Israeli raids have killed dozens of noncombatants in recent months, already making 2022 the deadliest year for Palestinians in the West Bank since 2015. Poverty and fury have made the camp a hotbed of militancy.

Abbas's strategy of lobbying the United Nations to condemn the Israeli occupation - instead of taking up arms against it - has long been dismissed here. Few said they would be paying attention to his speech at the U.N. General Assembly in New York on Friday.

Sabbagh has seen the evolution of the local youth movement firsthand. During the first intifada, or popular Palestinian uprising, from 1987 to 1993, he fatally stabbed an Israeli soldier and later served 23 years in an Israeli prison. After his release, he watched as younger neighbors splintered off into smaller groups and increasingly abandoned the classic weapon of choice - the knife - in favor of the gun.

The new generation, Sabbagh said as he paused to shake hands with camp residents, is trying to ensure that the despised national government is replaced by local militias, which will measure their legitimacy in guns rather than ballots.

"We may soon reach a situation where not one youth will stay at home; they will all be out clashing with soldiers in the streets," said Nasser al-Sadi, 27, an unemployed camp resident.

Fifty-six percent of Palestinians support armed attacks against Israelis, and the same proportion expect Jenin's armed resistance to spread throughout the West Bank, according to a June poll by the Palestinian Center for Policy and Survey Research.

Abbas's Palestinian Authority (PA), founded in 1993 as a five-year interim government to usher in the establishment of a Palestinian state, will turn 30 next year. It has not held elections since 2006, and an independent state is nowhere on the horizon. In April 2021, Abbas canceled a highly anticipated round of elections after polling showed his Fatah party could lose out to its Islamist rival, Hamas, which rules the Gaza Strip.

As Abbas remains in office and the influence of his government fades, Jenin has emerged as a key flash point in the Israeli-Palestinian conflict. In March, Israel launched the "Break the Wave" military operation in the West Bank after the deadliest string of Palestinian terrorist attacks in years, a number of them originating in Jenin. Young militants here have responded by engaging in gun battles with Israeli soldiers and shooting at civilians near border areas.

Members of Islamic Jihad use M16s or Kalashnikovs, gifted to them in return for joining the group, which fought a three-day battle with Israel in Gaza last month. But Israeli security analysts also report a spike in young people with no militant affiliations using the "Carlo" submachine gun, a cheap imitation of the Carl Gustaf rifle developed in Sweden in the 1940s.

The gun entered the criminal scene during the first intifada in the early 2000s and has since made its way to the West Bank, where it is assembled with spare car parts, scrap metal and other makeshift materials in workshops across the region's ungoverned areas in the far north and far south. A Carlo can cost less than $1,000 (M16s run about $20,000).

Israel is struggling to keep the arms buildup in check. This year, the Israeli army has seized more than 300 weapons - including pistols, Kalashnikovs and M16s - along the Jordanian and Egyptian borders, nearly double the rate in 2021. It has also confiscated 160 guns within the West Bank, including AK-47s and Tavors - the standard-issue Israeli military weapons - which had mostly been stolen from Israeli soldiers.

A significant number of arms have also been flowing in from Hezbollah, the Iranian-backed group in Lebanon, according to a senior Israeli military official who spoke on the condition of anonymity to discuss the sensitive security situation. "The PA have the means to deal with these weapons, but not the will," leaving Israel to pick up the slack, he said.

With the gun market booming, the near-nightly gunfights between Jenin's young militants and Israeli soldiers have turned increasingly lethal.

Earlier this month, hundreds of young men, carrying guns and explosives, turned out to protest the demolition of the home of Raed Hazem, who fatally shot three Israelis at a Tel Aviv bar in the spring before being killed by security forces. A 29-year-old resident was shot dead by Israeli soldiers while live-streaming the clashes on TikTok; 16 others were injured, according to the Palestinian Health Ministry.

Last Wednesday, two Palestinian gunmen from Kafr Dan, a village northwest of Jenin, used a Carlo and another improvised gun to fatally shoot an Israeli soldier at al-Jalama crossing. The men, one of them a PA security official, were killed in the subsequent shootout. The Israeli military shuttered Jalama for four days, halted work permits for Kafr Dan residents and began debating a wider operation in Jenin.

Retired colonel Miri Eisin, a former senior intelligence officer in the Israeli army, said the phenomenon of "hybrid" militants, inspired by and only partially affiliated with organized groups like Islamic Jihad, poses a challenge for Israel's army. The members of this new youth movement, she said, "are young, angry, unemployed members of Palestinian gangs, with no hierarchy - somewhere in between lone wolves and terror cells."

In recent years, the gangs have rebranded themselves as "battalions." The "Jenin Battalion" saw recruiting momentum after a 2021 prison break by six Palestinian men with family ties to Jenin, and has served as a model for similar "battalions" in Nablus, Tulkarm, Bethlehem and other West Bank towns, Eisin said.

Mansour al-Saadi, the deputy governor of Jenin, said the Palestinian Authority lacks the political will and resources to rein in the violence.

"We see some who call themselves Fatah in the morning and Islamic Jihad in the evening," Saadi said.

Part of the problem, Saadi said, is that the Palestinian Authority is headquartered 60 miles away, in Ramallah, where residents often have more direct contact with the Israelis living on the other side of the border wall. In Jenin, most young men are isolated, stuck at home with few economic prospects.

Ahmad Qassem, a 24-year-old camp resident, hasn't been able to find work since finishing ninth grade, his last year of school. He was recently released from an Israeli prison after a two-year administrative detention, during which he was never charged or granted a trial.

Behind bars, Qassem said he had a realization: "Twenty years ago, we made peace with Israel, but they don't respect any of it."

By The Levant - 19 hours ago
Israeli Prime Minister Yair Lapid threw a wrench into the works when he declared from the United Nations General Assembly podium: "An agreement with the Palestinians, based on two states for two peoples, is the right thing for Israel’s security, for Israel’s economy and for the future of our children." By Ramzy Baroud The statement took many […]
Read story