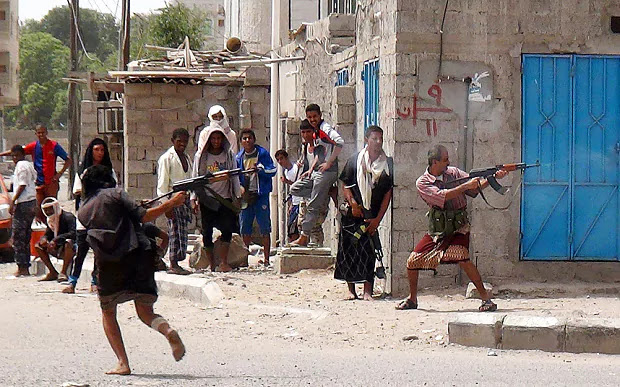 Southern Yemeni separatists have surrounded the presidential palace in the city of Aden following clashes with previously allied government forces.

Prime Minister Ahmed bin Daghar and members of his cabinet were believed to be holed up inside the compound.

The separatists - who had been backing the government in its war against the rebel Houthi movement - have also seized the city's military bases.

The Red Cross says the fighting has left 38 people dead since Sunday.

Yemen's internationally-recognised government relocated to Aden in 2015, when President Abdrabbuh Mansour Hadi and his cabinet were forced to flee the capital, Sanaa, by the Houthis.

A Houthi assault on the city that year prompted a Saudi-led multinational coalition to launch a military campaign to defeat the rebels. Since then, more than 9,245 people have been killed and 3 million displaced, according to the UN.

Why are the separatists and government fighting?

Supporters of both sides have fought alongside each other over the past three years but it has always seemed an uneasy alliance.

Before the conflict, separatist sentiment had been running high in the south, which was an independent state before unification with the North in 1990.

Although the separatists were suspicious of Mr Hadi - who is a southerner but supports continued unity with the north - they joined forces to prevent the Houthis capturing Aden and drive them out of most of the south. However, tensions between the two sides remained.

The situation was made more complex by divisions within the Saudi-led coalition. Saudi Arabia backs Mr Hadi, who is based in Riyadh, while the United Arab Emirates - a key partner in the coalition - is closely aligned with the separatists.

How did the clashes in Aden start?

They erupted on Sunday after the expiry of a deadline set by the separatist Southern Transitional Council (STC) for a cabinet reshuffle, including the removal of Mr Bin Daghar.

The council accused the government of "rampant corruption" resulting in a "deteriorating economic, security and social situation never before witnessed in the history of the south".

The fighting, which has involved tanks and heavy artillery, began in the eastern Khor Maksar district, where the airport located. It quickly spread to the southern Crater district, near presidential palace, and the hills overlooking the sea port.

As the separatists took control of official facilities and military bases, the prime minister denounced what he called a "coup". President Hadi, who is based in Riyadh, ordered his forces to secure Aden.

But by Tuesday morning, the separatists were said to have seized the last stronghold of the Presidential Guards force in the northern Dar Saad district and reached the presidential palace, where Mr Bin Daghar is based.

Security sources told the Associated Press that Saudi guards had stopped the separatists from entering the palace, and that the prime minister and several ministers were preparing to flee the city imminently for Riyadh. However, a government source told Reuters that Mr Bin Daghar had no intention of leaving.

What's being done to end the fighting?

The Saudi-led coalition urged both sides to cease hostilities on Tuesday. "The coalition will take all the measures it deems necessary to restore stability and security in Aden," a statement said.

The US, which is supporting the coalition's campaign against the Houthis, expressed concern and called "for dialogue among all parties in Aden to reach a political solution".

"The Yemeni people are already facing a dire humanitarian crisis. Additional divisions and violence within Yemen will only increase their suffering," it added.

The UN's interim humanitarian co-ordinator in Yemen, Stephen Anderson, said the violence was having a negative impact on its operations across the south of the country.

"Humanitarian movements within the city have been suspended and aid workers remain in lockdown in their residences, unable to continue critical life-saving activities," he warned.