A former ISIS prisoner and Nobel prize winner has called on world leaders to condemn the language used by the founder of Islamic Relief Worldwide (IRW) who referred to “devil worshippers” when talking about the Yazidi faith.

Dr Hany El Banna, who is also chairman of the UK’s Muslim Charities Forum, made the remark in a lecture he posted on Twitter discussing the role of non-Arabs in the Middle East.

It was the latest controversy involving a senior figure from IRW, which has seen three directors step down over comments relating to anti-Semitism and the Muslim Brotherhood in the last few months. 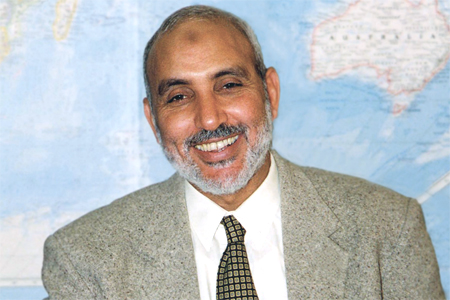 “It is disturbing to hear that the founder of IRW is using hateful and persecutory rhetoric against the Yazidi people,” Ms Murad told The National.

“We have suffered the discriminatory words of so many over the years, but to hear this hate coming from the leader of an international humanitarian organisation is just unacceptable.

“This type of rhetoric is what fuelled the targeted violence that led to the genocide of my people,” she added. “It is imperative that politicians and global leaders condemn this behavior immediately.”

Hundreds of thousands of Yazidi Iraqis were displaced and persecuted in the reign of terror imposed by ISIS after 2014 – some ISIS members even describing the Yazidis as followers of Satan.

The terrorist group wiped out entire communities, men were separated from their families and killed, and women enslaved in what the UN described as genocide. Murad was kidnapped from her hometown Kocho in 2014 and held by ISIS captors for three months.

Footage of Dr El Banna’s remarks was posted in September, just five days after IRW announced an independent review into the conduct of the charity’s trustees and senior executives.

IRW has defended Dr El Banna’s comments. “Viewed in full and in context, this video is a history lecture on the positive contribution of a diverse range of Muslims and non-Muslims to the development of Middle Eastern civilisations,” IRW said.

“It makes passing reference to how a number of groups are commonly referred to in the region to identify and introduce them. It references the contribution these groups have made to society and to civilization, encouraging mutual respect.”

The Muslim Charities Forum also came to his defense, stating that Dr El Banna has been at the forefront of galvanising aid for the Yazidi people.

In July, trustee and director Heshmat Khalifa quit the IRW board after being challenged about social media posts labeling Jews the “grandchildren of monkeys and pigs” and deriding Egypt’s president.

In another incident, Abdul Mannan Bhatti, an IRW fundraiser, deleted his Facebook account after posts with regular quotes from Sayyid Qutb, a founder of the Muslim Brotherhood, were highlighted.

The UK’s Disasters Emergency Committee, meanwhile, which raises millions of pounds for relief in countries such as Yemen, is due to re-examine the role of IRW, while the UK’s aid watchdog, the Charity Commission, has an ongoing compliance case against the body.

Dr El Banna co-founded the organisation in the English city of Birmingham in 1984. It was designated a terrorist group by the UAE in 2014.

Lebanese animator Louaye Moulayess was born and raised in a divided nation. With Disney Animation …