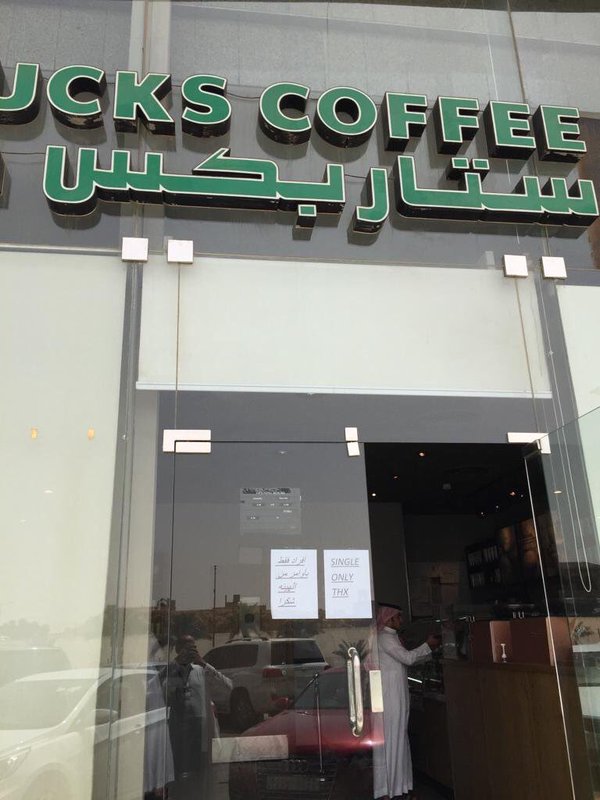 THE LEVANT NEWS — To the Western world, it’s a surprising thing to see.

Until very recently, one Starbucks in Riyadh, Saudi Arabia, had a sign with the phrase, “Please no entrance for ladies.”

The sign went up after a wall segregating families and single people when entering the coffee house fell down.

The temporary solution was to ban women from entering the Starbucks.

The full sign said, “PLEASE NO ENTRY FOR LADIES ONLY SEND YOUR DRIVER TO ORDER THANK YOU.”

It was first noticed in the social media world last Monday when someone going by “Manar M” tweeted, “#Starbucks store in Riyadh refused 2 serve me just because I’m a WOMAN & asked me 2 send a man instead.”

Manar M followed up by comparing the sign to signs from the segregated United States decades ago.

Starbucks issued the following statement to CNN: “At Starbucks, we adhere to the local customs of Saudi Arabia by providing separate entrances for families as well as single people. In addition, all our stores provide equal amenities, service, menu, and seating to men, women and families.”

The statement continues: “We are working as quickly as possible as we refurbish our Jarir store so that we may again welcome all customers in accordance with local customs.”

On Monday, Starbucks shared an update: “Starbucks welcomes all customers, including women and families, to enjoy the Starbucks experience. We have worked with local authorities to obtain approval to refurbish one of our stores in Jarir, which was originally built without a gender wall. That meant it could only accommodate men in accordance with local law.

“This was the only such Starbucks store in Saudi Arabia. During construction, the store could only accommodate and serve single men, and a poster was placed at the store entrance as required by local law.

The statement went on: “We are pleased to share that the store is now accessible to single men on one side as well as women and families on the other side. Starbucks has now 78 stores in Saudi Arabia and all stores cater to both families and singles, except for one that is exclusively reserved for women and families.”

Previous ISIS, in a First, Says It’s Behind Attack in Capital of Syria
Next Saudi Arabia Says It Shot Down Missile Fired From Yemen

On October 24, a discussion was held in the format of a videoconference on the …