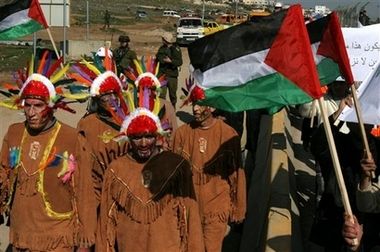 Will Palestinians face the fate of American Indians?

Considering the Palestinian cause from one angle, it seems to be in the most difficult situation since the emergence of the Palestinian tragedy more than a hundred years ago. The dangers that face the Palestinian people represented in attempts towards making the political division between the West Bank and Gaza permanent, confiscating the remaining land of the Palestinians for the colonialists and their projects, and liquidating the refugee issue by decreasing the financing of UNRWA. Everything is being plotted nowadays against the Palestinians by the United States, Israel and their allies who also serve this plot.

The above mentioned dangers facing the Palestinian entity, whether cultural, social or demographic; mean the futility of the Palestinian struggle over decades that has been and continues to be one of its goals the repatriation of refugees to their homeland

The Palestinian division is another calamity that may not be less than the Nakba that took place in 1948. Otherwise, how can a boat sail in a very delicate and dangerous set of circumstances if it has more than one commander? The leadership in perfectly normal circumstances requires exceptional skills and abilities, so what to do if the circumstances are blurred!

The third aspect of the dangers is the loss of the Palestinian people to its land and its resources, there is no people in the world in the nowadays its land has been confiscated except the Palestinian people, the holder of the long-lasting tragedy. When we talk about the land, we do not forget the symbolic, cultural, political and economic meanings of the city of Jerusalem. The occupation has been Judaizing it, as well as the rest of the Palestinian lands with its endless housing projects, as if the occupation if facing a population explosion.

We return to the question, which is the title of the article. Do Palestinians face the fate of the American Indians? Israel and those who back it up see that the solution to the Palestinian tragedy is to oppress the Palestinian people and subjugate it by various means; the goal will be to accept what the rulers of Israel, its generals and orientalists are planning.

The American Indians are the indigenous people of the United States. The fate of the American Indians resembles the Palestinian people; colonizers invade their homeland, dispossess the original citizens of their land and committed massacres against them to establish their "state". The newcomers build their life and colonial civilization at the expense of the simple people who are now living on the sidelines of American life.

As an introduction to answering this question, Munir Al-Akash, in his book "A Palestinian State for the Red Indians", cited a saying by the Red Indian leader Tecumseh in September 1811, when he said that Red Indian have only to resist or wait for genocide. The were stronger than the White invader, but they will not be able to resist them if the white man can divide the Indians.

The American Indians were defeated, according to Al-Akash, due to the peaceful spirit and beliefs of these peoples and for other reasons.

* A Palestinian journalist based in Ramallah

One comment on “Will Palestinians face the fate of American Indians?”