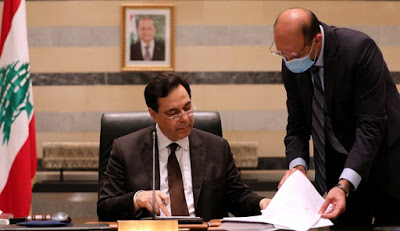 Skeptics ponder if government resignation change anything for Lebanon

So, Lebanon’s prime minister and leading government ministers announced their resignation on Monday evening. They evidently preferred to fall on their swords after demonstrations in Beirut featured effigies with nooses around the necks of Hassan Diab, Hezbollah leader Hassan Nasrallah and others. The question is, will Lebanon get the change it really needs?

The Lebanese people are demanding accountability and the replacement of their political and economic elite. In a country already beset by corruption, gross government mismanagement, hyper-inflation and other woes, the detonation on August 4 of some 2,800 tonnes of improperly stored ammonium nitrate in Beirut’s port does seem like the proverbial final straw.

Even so, the core demands of the Lebanese are likely to remain unmet. Without Hezbollah’s disarmament, Lebanon is going to have different governments with the same problem. Not even a blast which has left hundreds of thousands homeless and whose shockwaves were felt as far away as Cyprus, is powerful enough to defang the Iran-backed organization on its own.

Blame for the explosion and the economic crisis plaguing Lebanon falls especially, though not exclusively, on Hezbollah and some of its allies from the Free Patriotic Movement (FPM).  These are, after all, the dominant political actors running Lebanon since around 2008.

Bahaa Hariri, the son of Lebanon’s slain former Prime Minister Rafic Hariri, placed the blame squarely upon Hezbollah: “The question we have to ask is how come for six years this combustible material was allowed to remain in the middle of this city of 2 million people?”

He then proceeded to offer an explanation. “It is crystal clear Hezbollah are in charge of the port and the warehouse where the ammonium nitrate was stored. Nothing goes in and out of the port or the airport without them knowing. Nothing. Their decision to put it there in the middle of a city of two million people was an utter disaster. And now we have a destroyed city center.”

Bahaa’s father Rafic was killed in 2005 by a massive car bombing widely attributed to Hezbollah of course. The site of that attack was only a few hundred meters from the port where the latest explosions occurred. The 15 year-long UN investigation into the killing of the elder Hariri is supposed to announce its determination on August 18.

Many contend that Hezbollah not only knew about the thousands of tons of ammonium nitrate dangerously kept at the port, but had a role in keeping it there for its own uses in the future. Unsurprisingly, a warning from the Israeli ambassador to the UN to the Security Council last year sounds a lot more ominous in hindsight: “Israel found that Iran and the Quds Force have begun to advance the exploitation of civilian maritime channels, and specifically the Port of Beirut. The Port of Beirut is now the Port of Hezbollah.”

Although most Lebanese harbor little love for Israel, in the wake of the Beirut explosions their views of Hezbollah sound increasingly familiar. Journalist Dima Sadek published a video a few days ago in which she bluntly addressed Hezbollah: “You claim you’re here to protect us. After all, your security people were at the port. You force us to accept you as a part of the state, but what did you do? Do you really want to say you did not know there were 2,750 tons of ammonium nitrate in the port? Israel has not done to us what you are doing.”

Hezbollah may not have had any real role or responsibility for the explosions, however, beyond its almost certain knowledge of the ammonium nitrate’s presence in the port. The group has other sources for better explosives than poorly stored ammonium nitrate. If Hezbollah was not directly responsible, it nonetheless shares much of the blame for the government mismanagement that made such a terrible accident possible.

More broadly, since Hezbollah turned its guns on Druze leader Walid Jumblatt and other rivals in 2007, the group became the governing establishment in Lebanon. Using a few fig-leaf Christian allies from parties such as the FPM to avoid accusations of sectarianism, the Shiite Hezbollah calls the most important shots in Lebanon today.

They do so thanks to their own militia, whose strength rivals that of the Lebanese Army. Every other party in Lebanon had to disband their militias as part of the 1989 Taif Accord that ended the Lebanese civil war.

Hezbollah kept its militia under the initial pretext of fighting Israeli occupation of south Lebanon. Israel was compelled to withdraw from Lebanon 20 years ago, yet Hezbollah’s military wing endures — despite three UN resolutions (UNSC Resolutions 1559, 1680 and 1701) calling for the disbanding of all Lebanese militias.

Hassan Nasrallah used that militia to embroil Lebanon in a needless war with Israel in 2006, sparking a conflagration that ravaged half the country. The next year he used the militia to outmaneuver and coerce other Lebanese parties and cement a dominant role for Hezbollah in Lebanon’s government.

Today Hezbollah uses its militia to veto any substantive changes that might threaten its interests. Besides its role in a corrupt governing system (with allies perhaps even more corrupt than themselves), those interests include control of smuggling at Lebanon’s ports and borders, obstruction of IMF economic rescue packages that could help make Lebanon’s budget accountable to the people, and the alignment of Lebanese foreign policy with Iranian preferences.

The latter has proved especially damaging for Lebanon. With its corrupt Ponzi scheme of a banking sector, Lebanon depended on continuous infusions of cash from Western and Arab Gulf states. But Western aid started drying up with Hezbollah’s attempts to use the Lebanese government to evade sanctions on itself and to help Iran do the same.

Arab Gulf aid tapered off after Hezbollah and its allies in the government made Lebanon adopt pro-Bashar Assad and pro-Iranian foreign-policy stances.

The list goes on and on, with Hezbollah fighters involved in the Syrian civil war on behalf of the Assad regime, Hezbollah advisors in Yemen helping the Houthis, Hezbollah operatives sent to carry out various terrorist plots in Cyprus, Georgia, Argentina, Southeast Asia and elsewhere.

Small wonder then that Lebanese leaders come home from donor conferences these days with little or nothing to show in the way of pledges. Although the devastating Beirut explosions did secure some new emergency assistance, this will not rescue Lebanon from the larger economic woes stemming from Hezbollah’s politics and the corruption of much of its political and economic elite.

The kind of change Lebanon needs to overcome such entrenched problems requires removing the current system by the roots. Although the blame for Lebanon’s woes does not belong to Hezbollah alone, no far-reaching remedy seems likely to succeed as long Hezbollah continues to field its own very well armed and unaccountable militia.

Previous Assassination attempt on Trump at White House
Next Kuwait, Iraq claim they weren’t behind attack on US forces – UPDATE