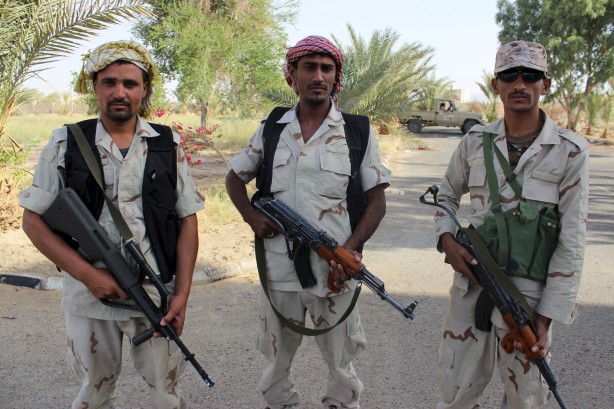 By Mohamad Bazzi for Reuters -- On March 5, Saudi Arabia’s foreign minister announced that the kingdom would complete a $4 billion arms deal with France, but instead of sending the weapons to Lebanon — as was first planned — the arms would go to the Saudi military.

“We didn’t stop the contract. It’s just going to Saudi Arabia, not to Hezbollah,” Saudi Foreign Minister Adel al-Jubeir said at a news conference in Paris. “We have a situation where Lebanon’s decisions have been hijacked by Hezbollah. The contracts will be completed, but the clients will be the Saudi military.”

This episode underscores how Saudi Arabia — emboldened militarily, but struggling financially — is being more selective in using its checkbook diplomacy. With the global collapse in oil prices and economic pressures at home, the House of Saud is scaling back some of its aid to fellow Arab countries, especially those that fail to line up behind Saudi regional policy. Aside from cancelling the $4 billion in grants to Lebanon, Saudi officials may also be slowing down billions of dollars in aid to Egypt.

While it’s true Saudi leaders wanted to punish Hezbollah and Lebanon by revoking the military aid, the kingdom also diverted those funds to help sustain its war effort in Yemen, which by some estimates is costing the Saudi treasury $1 billion a month. Last year, Riyadh racked up a record budget deficit of nearly $98 billion, which was made up by dipping into its massive foreign reserves. And in another sign of Saudi belt-tightening, officials are seeking international loans of $6 to $8 billion — the first time the kingdom has sought foreign financing in over a decade.

In recent years, Saudi Arabia pursued a muscular foreign policy that benefited from decades of economic expansion fueled by booming oil prices. The former Saudi King Abdullah, who died in January 2015 after two decades in power, presided over a proxy war with the kingdom’s regional rival, Iran — a series of battles in Iraq, Syria, Yemen, Bahrain and Lebanon — that have shaped the Middle East since the George W. Bush administration invaded Iraq in 2003. Still, Saudi foreign policy was more cautious and less militarized than it is today. The kingdom relied on the United States to guarantee its security, and worked through proxies and checkbook diplomacy to advance its interests.

Since he ascended to the throne after Abdullah’s death, the new king, Salman, has pursued a more aggressive foreign policy. Instead of relying on U.S. military intervention and battling Iran through proxies, Salman and his advisers are overturning the old regional order. In March 2015, the new monarch launched a war against Houthi rebels in Yemen and appointed his 30-year-old son as defense minister (and deputy crown prince) to oversee the campaign. The war is popular with the Saudi public, despite the economic cost and the fact that civilian casualties are mounting in Yemen.

Salman also increased Saudi support for Sunni rebels fighting Bashar al-Assad’s regime in Syria — another signal that the kingdom is no longer as reliant on the United States and is taking a more assertive role to counter what it views as Iran’s growing regional influence. Salman and his inner circle are more willing to undertake military adventures and to directly confront Iran, even as Riyadh manages internal problems. Saudi Arabia is facing a “youth bulge”: more than half of the country’s 20 million citizens are under the age of 25. Two-thirds of the population is under 30. Most troubling, the estimated unemployment rate for Saudis aged 15 to 24 is about 30 percent.

Oil prices began to plunge in mid-2014, and fell below $30 a barrel — a 12-year low — in January. Saudi officials insist that their substantial foreign reserves allow them to withstand a long period of low oil prices and potential regional turmoil. (Saudi reserves peaked at around $800 billion in mid-2014; some economists forecast that they could drop to $500 billion by the end of this year.) In October, the International Monetary Fund warned that the kingdom risks running out of money within five years if it does not make structural changes to deal with collapsing oil prices. Those warnings prompted Saudi leaders to impose spending cuts, pursue reforms to energy subsidies and revive efforts to raise new revenues from taxes.

Facing these pressures, the Saudi government sees foreign aid as another area to reduce spending. But Riyadh is likely to make new cutbacks quietly, instead of through public announcements like the one that targeted Hezbollah in Lebanon. The challenge for Saudi leaders is to rein in spending without alienating their allies in the region, especially those supporting the proxy battle with Iran. The conflict with Iran has defined Saudi foreign policy over the past decade, and it intensified since the Arab uprisings of 2011, when the House of Saud tried to choke off revolutionary momentum in the region.

The Saudis were particularly worried after the fall of Egyptian President Hosni Mubarak in February 2011, and the ascendance of the Muslim Brotherhood. The Egyptian military ousted Mohamed Mursi, a Brotherhood leader and the country’s first democratically elected president, in July 2013. The coup’s main instigator, Abdel Fattah el-Sisi, is now president, and he has restored many elements of military rule and returned officials from Mubarak’s former regime to power.

In Sisi, the House of Saud found a new strongman for Egypt. As he led a crackdown against the Brotherhood, the kingdom became his most important sponsor. The Saudis provided more than $12 billion to keep the Egyptian economy afloat, and they pressed two other Gulf monarchies, the United Arab Emirates and Kuwait, to pledge more aid. Since the coup, Sisi’s regime has received over $30 billion in support from the three Gulf monarchies.

In December, Saudi Arabia pledged another $8 billion in investments and oil grants to Egypt over the next five years. But some Saudi officials have hinted that the funding could be delayed or suspended if Sisi does not back away from his outreach to the Assad regime in Syria, which is supported by Iran.

The Saudis are also angry over a series of leaked audio recordings of Sisi and other top generals, which showed that Gulf states had provided funds to help the Egyptian military finance a protest campaign against Mursi. After the coup, one recording captured Sisi instructing a deputy to keep billions of dollars in Saudi and other Gulf aid in accounts controlled by the defense ministry, rather than the civilian government. On other recordings, Sisi and his fellow generals can be heard mocking their Gulf patrons and how easy it is to demand large sums from them. “Why are you laughing?” Sisi asked his chief of staff. “They have money like rice, man!”

With the collapse in oil prices, money is no longer flowing like rice into Saudi coffers. And that means the kingdom will be forced to restrain its checkbook diplomacy.