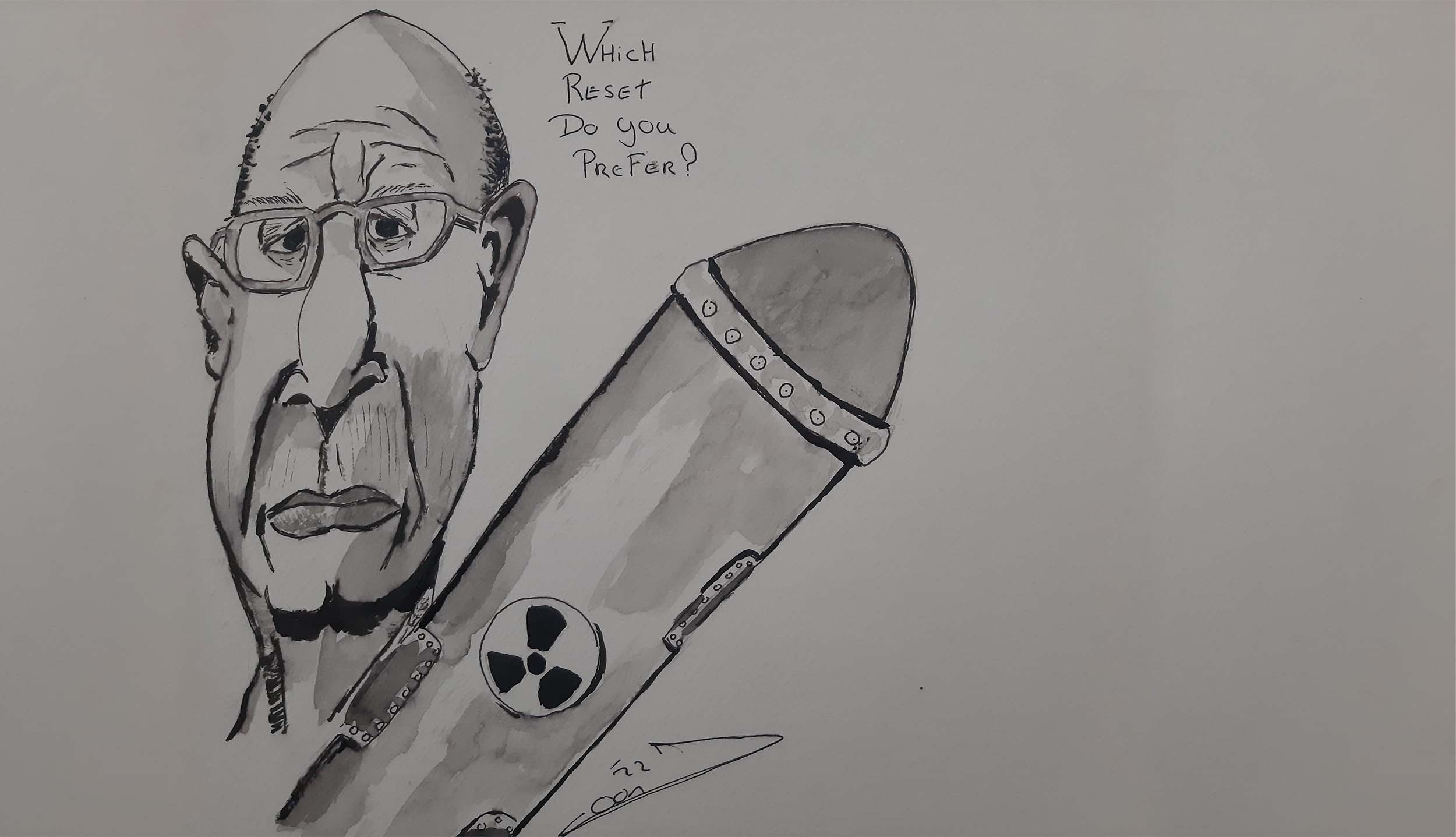 Who does Klaus Schwab, the pharaoh of the World Economic Forum (WEF), think he is? A modern-day messiah who will save the world with a new and more sustainable economic system? Or a Dr. Evil-style psychopath with a hidden agenda to enforce a global economic collapse and take over?

By Arthur Blok, cartoon by Joon W.
Schwab, founder and chairman of the WEF, heads of state, and other prominent figures of the world’s financial elite gathered in Davos, Switzerland, last week at the World Economic Forum. Surprisingly, a darkening global economic outlook was the number one talking point.

It has become a ritual. Every year, a clique of international politicians and billionaire power brokers flies in its private jets with full motorcades to places like Davos to determine our fate, the ‘normal’ working people.

While some this year foresaw regional pockets of recession in countries or continents particularly exposed to the Russia-Ukraine war and global supply chain problems - with Europe a particular concern - others painted a far bleaker global picture.

Inflation has soared worldwide, with food and energy costs skyrocketing as the war and supply chain bottlenecks bite, along with the residual effects of the Covid-19 pandemic. This has forced central banks to tighten monetary policy against slowing economic activity.

This is just the beginning.

Definitions
Before we dig deeper into that, for clarity, let us first revisit the definitions of what a psychopath is. Psychopathy (sometimes synonymous with sociopathy) is a personality disorder characterized by persistent antisocial behavior, impaired empathy and remorse, and bold, disinhibited, and egotistical traits.

A sociopath is a term used to describe an antisocial personality disorder (ASPD). People with ASPD can’t understand others’ feelings. They’ll often break the rules or make impulsive decisions without feeling guilty for the harm they cause.

Enough said. Please fear not Schwab assured us. Soon we will have a ‘Great Reset’; we will own nothing and be happy about it. Once the system collapses, we are not returning to our previous lives. Schwab’s Great Reset will dictate the future. At least, that is what he plans to do.

Is that not fantastic foresight?

Nothing wrong with bold ambitions and bald individuals who want to take over the world with a new system? Schwab’s brainwashed team and unknown wealthy financiers should scare every standard, hard-working individual.

Schwab is only their messenger, spokesman, or representative. Pick one. More importantly, who exactly are the members of the WEF, and who finances them?

The WEF was founded in 1974 as an NGO, registered in Geneva, Switzerland, by its sitting president and executive chairman, Schwab, metaphorically referred to as a pharaoh, king, emperor, or ruler. He represents a top-down approach, regulating and mandating to his pupils what to do.

Self-proclaimed and never voted for by any world public; the WEF is playing a role in the forefront of the public arena that seems to have a supra-governmental status, comparable to the UN, UNESCO, FAO, and WHO… which, ideally, are recognized institutions of international legislation.

Nobody understands how they got this status.

Self-imposed
The WEF is self-imposed by way of its economic importance. For years, it has been gathering major global economic and financial players, as does 1954 founded less communicative and secretive Bilderberg Society.

So the WEF is financed by the world’s most considerable cooperation and wealthy individuals. They are pushing for ideas and plans that look, at first sight at least, quite noble.

Let’s look, for example, at their obsession with climate change: the reduction of CO2 emissions, usage of plastic, etc.

Ironically, this climate plan is put on the agenda by a group of people who are individually the most prolific polluters. Yet, they want the rest of the world to reduce their collective impact on the environment or carbon footprint. What about them?

There are many more similar examples, like introducing a digital passport.

Their international network diligently concentrates most of the wealth at the top, drastically reducing ‘our’ standard of living, and gaining complete digital control by individually implanted digital ID, ushered in as a trojan horse called a vaccine passport or health pass.

Once in place, you will be cut off if you step out of line, just like the Social Credit system in China. This is not a paranoid interpretation of facts or a conspiracy. It is all out there on the website of the WEF and the website of the European Union.

Without jumping into conspiracies, it looks like their other (global) issues such as immigration, social justice, digital currency, the response to COVID, vaccine mandates, vaccine passports, sexual orientation, race, and the demonization of religion are all connected.

As if they are part of a tool-set to divide us commoners and coerce us into their idea of utopia: The Great Reset. After which, we all find our happiness. At least that is the carrot they hold in front of us.

In the past decennia, the WEF trains candidates into designated politicians, Members of Parliament, ministers, scholars, scientists, lobbyists, activists, etc., to ‘infiltrate’ parties and institutes to influence national agendas and systematic collapse.

Think about that for a second: ‘to infiltrate parties, institutes, and organizations in foreign countries and systems as agents for the WEF.’  Those are Schwab’s own words.

The magnitude of this hypocrisy is breathtaking.

Covid-hysteria
Another recent example of their agenda in the mainstream media-lead Covid-hysteria. Did all Covid-measures such as lockdowns and movement restrictions not do precisely the opposite as they were meant to?

It had nothing to do with healthcare. After a few weeks, it became evident that it mainly killed local economies, particularly medium and small enterprises, while benefiting the wealthy WEF advocates and large corporate sponsors.

It could also be a mere coincidence.

Now returning to Schwab and his plan to take over the world. Is he a psychopath or not?

He has been working for over 25 years with his “agents” infiltrating political parties, national and international institutes to work towards systematic collapse to introduce something new.

Good or bad, what is the difference?

Summarizing: the WEF advocates participating with a foreign entity working to overthrow a democratic system to replace it, or better said, Reset it.

There is a word for that: treason; punishable by national and international law.

5 comments on “Who the hell does Klaus Schwab think he is?”