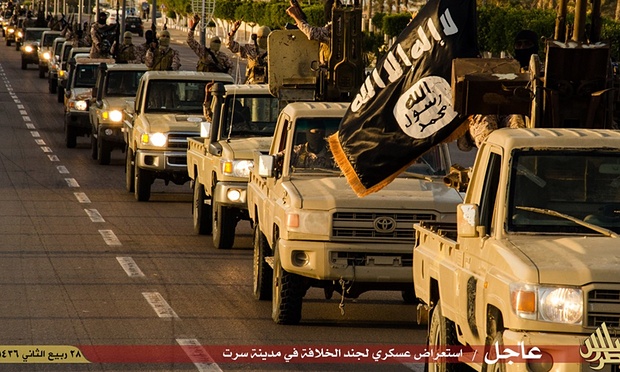 West ‘can’t fight Isis in Libya without a unity government’

THE LEVANT NEWS — Islamic State (Isis) in Libya has become a threat to all of Europe and western military intervention may now be required, but only so long as the Libyans can first form a coherent national government, Sir Peter Ricketts, David Cameron’s former national security adviser, has warned.

Ricketts, who has just ended a stint as UK ambassador to France, said there was a “very remote” chance UK combat forces would be used, and said airstrikes on their own would be of no use.

Western powers have been considering whether any military intervention, such as training Libyan security forces, can help prevent Isis gaining a permanent foothold in the oil-rich country.

Speaking on BBC Radio 4, Ricketts described Libya as an ungoverned space. “It is a threat to all of us in Europe because Isis is moving in so there is a case to do everything we can to help them produce stability in Libya, but they have got to do it. The likelihood of British combat forces being deployed seems to me very remote, but supporting the Libyans to do a more effective job in governing their own space, I can certainly see a case for that.”

UN-led efforts to form a national unity government in Libya following the overthrow of Muammar Gaddafi in 2011 have foundered. Two rival administrations have formed and militias have proliferated across the country. The UN has so far failed in efforts to reconcile differences between the governments, which are based in Tripoli and Tobruk.

Discussions are continuing in the west as to whether a force could be assembled to help defeat Isis, but the lack of a unity government is allowing Isis space and time to expand.

The stories you need to read, in one handy email
Read more
The number of Isis fighters in Libya has reportedly increased to 5,000. The group currently holds sway in the port of Sirte, and is trying to move into the Libyan oilfields.

Isis is said to be under growing financial pressure in Iraq as it loses access to oil, so Libya would be a major strategic prize for the group.

The UK foreign affairs select committee has been examining the merits of the western intervention in 2011 and what the west could have done to prevent the country collapsing into chaos.

Ricketts, who was national security adviser at the time, said the intervention was right “because it stopped a bloodbath in Benghazi and it gave the Libyan opposition groups a chance to get together to form a coherent government with a coherent security structure and basically reinvent their country. They failed to do that, which is a great disappointment.”

He also ruled out airstrikes. “We can only do anything if there is an emerging security structure that we can support, because we cannot bring security to Libya ourselves.”

Martin Kobler, the UN special representative in Libya, has expressed his frustration at the disputes between the groups, telling Der Spiegel they “discuss commas in agreements and bring legal arguments into play. Isis does not discuss commas, it is capturing new territory each day. If things keep going like this they will soon capture the oil terminal Ras Lanuf. But the awareness that people need to be coming together to counter the threat is still lacking. My fear is the political process is not going to go as fast as the military process.”

The UK ambassador to Tripoli, Peter Millett, has also warned that the number of gunmen had multiplied since the end of the war because the Libyan central bank has been forced at gunpoint to fund the militias. “There is a real problem with the proliferation of militias,” he said. “The fact is that all main militias are still paid for by the central bank. Bored young men can join a militia, then they have a salary and something to do.”

Asked why the central bank was continuing to fund the different militias – including factions who are at each other’s throats – Millett said: “I am told that in 2012, a gun was held to the minister of finance’s head and he was told ‘sign that cheque’. They were told that the easiest thing was simply to buy off the militias.”

Estimates of the number of militia men in Libya have gone from around 30,000 at the time of the anti-Gaddafi revolution to as high as 140,000 now.

Millett said “If you do not have a government, what can you do about Isis? I do not think we have an answer. If the whole thing collapses we will be into a very difficult situation. It will be difficult to deal with Isis without a formal request from the Libyan government.”

Jeremy Corbyn has written to Cameron seeking assurances that no British troops will be deployed in Libya without the agreement of the Commons. It is possible the UK government could argue that the troops were not being sent in a combat role and the relatively recent tradition of seeking Commons prior approval does not apply.