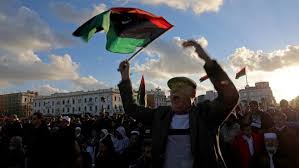 Violence breaks out on Libyan streets

Armed men fired in the air to disperse several hundred protesters demonstrating over living conditions and against the government in the Libyan capital, Tripoli, on Sunday, a Reuters witness said.

Protesters marched to the headquarters of the Government of National Accord (GNA) to voice anger over what they called a “slow death” due to collapsing public services, corruption and economic pressures, before heading to central Tripoli’s Martyrs Square, where they were scattered by gunfire.

The area was later closed off amid heavy security. The Interior Ministry blamed “infiltrators” for violence against peaceful protesters that left one person injured, and said it was investigating.

The protest came two days after GNA Prime Minister Fayez al-Sarraj announced a ceasefire in Libya’s long-running conflict and called for the lifting of an oil blockade by rival authorities based in the east of the country.

For more than five years, Libya has been divided into rival camps based in the east and west. In June, Turkish military support for the GNA forced the eastern-based Libyan National Army to retreat from a 14-month offensive on Tripoli.

The LNA has received backing from the United Arab Emirates, Egypt and Russia in a conflict that has become an arena for regional rivalries. Front lines have settled for weeks round the LNA-held city of Sirte, in the centre of Libya’s coastline, and Jufra to the south.

“The initiative that Sarraj signed is for media marketing,” Mismari said. “There is a military buildup and the transfer of equipment to target our forces in Sirte.”

Mismari made no reference to a parallel ceasefire call also issued on Friday by the head of Libya’s eastern-based parliament, Aguila Saleh.

Some of the protesters in Tripoli carried white flags to show their lack of allegiance to any of Libya’s main factions, and pictures of Sarraj, Haftar and Saleh with their faces crossed out in red.

Uzbeks in Syria targetted for repatriation

Uzbekistan plans to repatriate another group of its citizens, mostly women and children, from Syria …