Pilov is the most classic dish of Uzbekistan, consisting of rice, onions, carrots and meat, all cooked slowly in layers in a traditional cast-iron kazan (essentially, a cauldron). If you don’t have a kazan lying around, you can substitute it for a cast-iron casserole dish.

By Sher Karimov
For Uzbeks, pilov represents hospitality and identity. While the ingredients can vary (you can make it using lamb or beef and spices to your taste), one thing that is consistent is it’s always served in generous portions! The Uzbek melon. Sorts of melons in Uzbekistan and their positive effects on health

Do you love melons as much as all the rulers of the East loved them since B.C.? In Central Asia they say: “Melon makes cheeks ruddy, teeth stronger, hair silkier, and eyes younger!” There is an anecdote, that in Uzbekistan, Kyrgyzstan and Tajikistan, melon is loved like a woman; in Turkmenistan – respected as a president.

Then there are Uzbek melons. Along with astounding fragrance and sweetness the melon boasts a rich set of useful qualities. One of the most important is the ability to induce endorphins, which makes it a good remedy for depression and the spleen. The useful substances in the plant have a pronounced toning effect, and vitamin C reinforces the immune system. Rich in iron salts melon is good for treating anemia and various heart diseases. A high content of silicon in this paradise fruit is inspiring for women. This element is very important for the hair and skin health, which makes melon the number one cosmetic from all the foods. The melon ability to improve skin, hair and nerves was noted back in antiquity, at the same time the fact was noted that melon seeds benefited male strength. In addition, the melon is rich in fiber, so it can be used for detox. 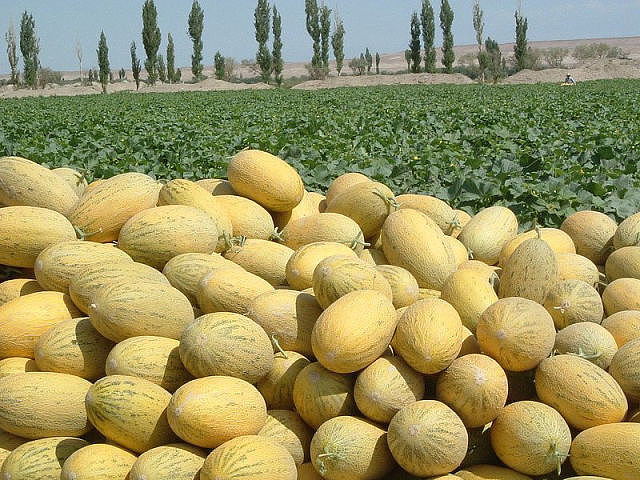 Uzbek urik (apricot).
The richest gifts of Uzbekistan are juicy and sweet fruits, berries and vegetables that please the eye and nourish the body from early spring to late autumn. Urik is one of the earliest that starts to bloom. What is urik? Mmm, it’s very tasty, sweet and sunny fruit!

Uzbek urik (apricot). Uzbek urik is practically an apricot, but its Central Asian varieties have certain species and taste differences. In Uzbekistan smaller breeds are called «urik», while «apricot» is the name for larger and nicer fruits. Some believe urik to be suitable for drying only. Although it is far from the truth, as urik is an embodiment of delight, bright taste, aroma and juiciness of a hot summer.

Early varieties of urik begin to blossom in March when there is still a possibility of snowfall. If it occurs one can see an amazing struggle between leaving winter and coming spring. Blooming apricot trees are covered in snowflakes, which, however, melt in a couple of days. Cities and suburbs are filled with divine aromas of flowering apricot trees, shortly afterwards they are followed with cherry and plum, alycha (cherry plum), apple-trees, quince, and much more to blossom.

Urik begins to ripe up in the spring, actually, it tries to ripen, as children snatch off it while green and unripe – both for fun and to taste it while sour. As demand creates supply, unripe urik (doucha) nowadays can even be found on sale. Markets often sell fine small apricots with “freckles” (brown small dots); they should not embarrass you, it is just as tasty and harmless. 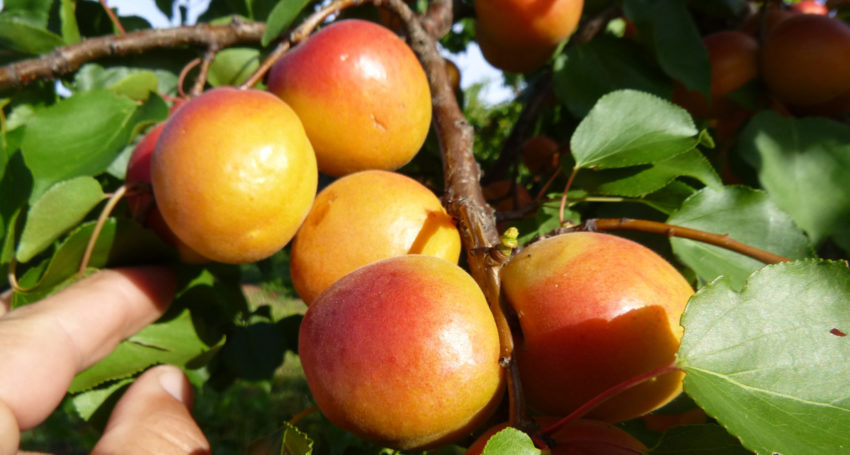 Pomegranate Scarlet Grains of Health
Throughout history people assigned meaning to various natural phenomenon.  As a result weather events, animals and plants became symbols of something a man possessed or wished.

Pomegranate. Scarlet Grains of Health. This is true for pomegranate assumingly originated in second millennium BC. As it was eaten in prehistoric times by primitive people, and eventually became more than a food. Thanks to the bizarre structure with the blood-red grains pressed to each other and clad in a strong peel, pomegranate eventually became a symbol of strong union or indissoluble marriage. An abundance of grains, in some varieties it can reach two thousand, making pomegranate a symbol of fertility. This is confirmed by the manuscripts of ancient Greece, and in different folklore tales. In Christian culture pomegranate, along with a lily and a bee, is a symbol of the Virgin Mary. The scarlet fruit was also important in the eastern tradition. The crown-like form of pomegranates’ carpel made it a symbol of the monarchic power, and as a result its image was often embodied in wood to decorate the scepter of rulers.