Uzbekistan has officially joined the Cooperation Council of Turkic-speaking Countries, also known as the Turkic Council. The decision to admit Uzbekistan to this group was taken on 15 October at the summit of the States Parties in Baku, the capital of Azerbaijan.

Uzbekistan is one of the important countries in the Turkic world. Uzbekistan ‘s accession to the Turkic Council is a historic step.

Full membership of Tashkent in the organization will contribute to solidarity of Turkic-speaking countries, deepen cooperation, increase coordination for the well-being of peoples

Over the past period, the situation has changed, and integration processes have intensified. In modern conditions, no state can independently develop a full range of its opportunities in the trade and economic sphere, in attracting investments. Having joined the Cooperation Council of Turkic-speaking States, we are also integrating into the Trans-Caspian logistics route, which is beneficial for all participants.

Turkey and Azerbaijan will ensure access of their products to the markets of China and South Asia. For Uzbekistan, Kazakhstan and Kyrgyzstan this transport route will allow reaching the markets of Europe and the Middle East with fewer costs. Issues related to the cultural and humanitarian sphere and the development of tourism will also be more effectively addressed.

All our countries face similar threats and challenges to the development of extremist ideas, radicalism and terrorism. In this regard, the Council of Turkic-speaking States provides mechanisms for cooperation between countries in the field of interregional security both here in Central Asia and the Caucasus. This does not imply any military-political bloc, it speaks precisely about the interaction of law enforcement agencies and special services providing security

President of Republic of Uzbekistan Sh.Mirziyoyev suggested that the countries of the Turkic Council create joint technology parks, innovative startup companies and venture funds, a joint investment fund and trading houses of Turkic-speaking countries. In his opinion, the investment fund and trading houses will contribute to the establishment of direct ties between entrepreneurs based on understanding and trust.

The Uzbek leader also stressed the importance of implementing large transport and communication projects that will help to reach the markets of Europe, China and South Asia and effectively use the potential of the new Baku-Tbilisi-Kars railway.

Also, in his speech, Mr Mirziyoyev proposed to establish a forum of young entrepreneurs within the framework of the Turkic Council and to hold its first meeting in 2020 in Uzbekistan. He intends to involve talented and educated youth of participating countries in entrepreneurship.

The President of Uzbekistan spoke in more detail about Uzbekistan ‘s priorities in cooperation with the Turkic Council in his article for the Turkish newspaper Hurriyet Daily, published on the opening day of the Baku Summit of the TS. 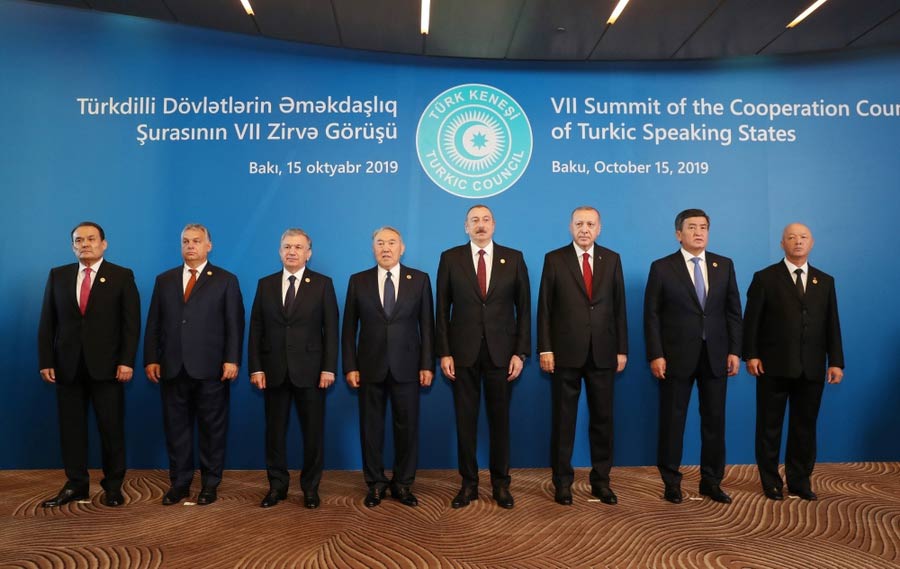 First of all, in his opinion, it is the expansion of mutually beneficial trade, economic and investment ties. “I believe that first of all, it is necessary to strengthen cooperation between leading industrial enterprises, investment companies, banking and financial institutions and entrepreneurs of our countries, as well as to establish effective interregional cooperation,” the President wrote.

Uzbekistan is also interested in promoting cooperative ties in the areas of transport and transit. “The creation of an integrated transport network will allow access to major global and regional markets. We are talking first of all about the international transport corridors North-South and East-West, road, rail and air routes linking the region of Central Asia with China, the states of South-East and South Asia, the Middle East and Europe, Sh. Mirziyoyev said.

He recalled that several strategic projects for the development of transport infrastructure had already been implemented in the region for this purpose. “Great opportunities are also opened with the development of the Andijan-Osh-Irkeshtam-Kashgar road corridor, as well as the beginning of the construction of the China-Kyrgyzstan-Uzbekistan railway,” he said.

Also, according to the Uzbek leader, the introduction of innovation into all spheres of information and communication technologies is a determining factor of competitiveness and sustainable development of any state. In this regard, Sh.Mirziyoyev invites the countries of the Turkic Council to establish a partnership between the agencies responsible for innovative development, research centres and venture capital companies to promote programs and projects for mastering of technologies of the future.