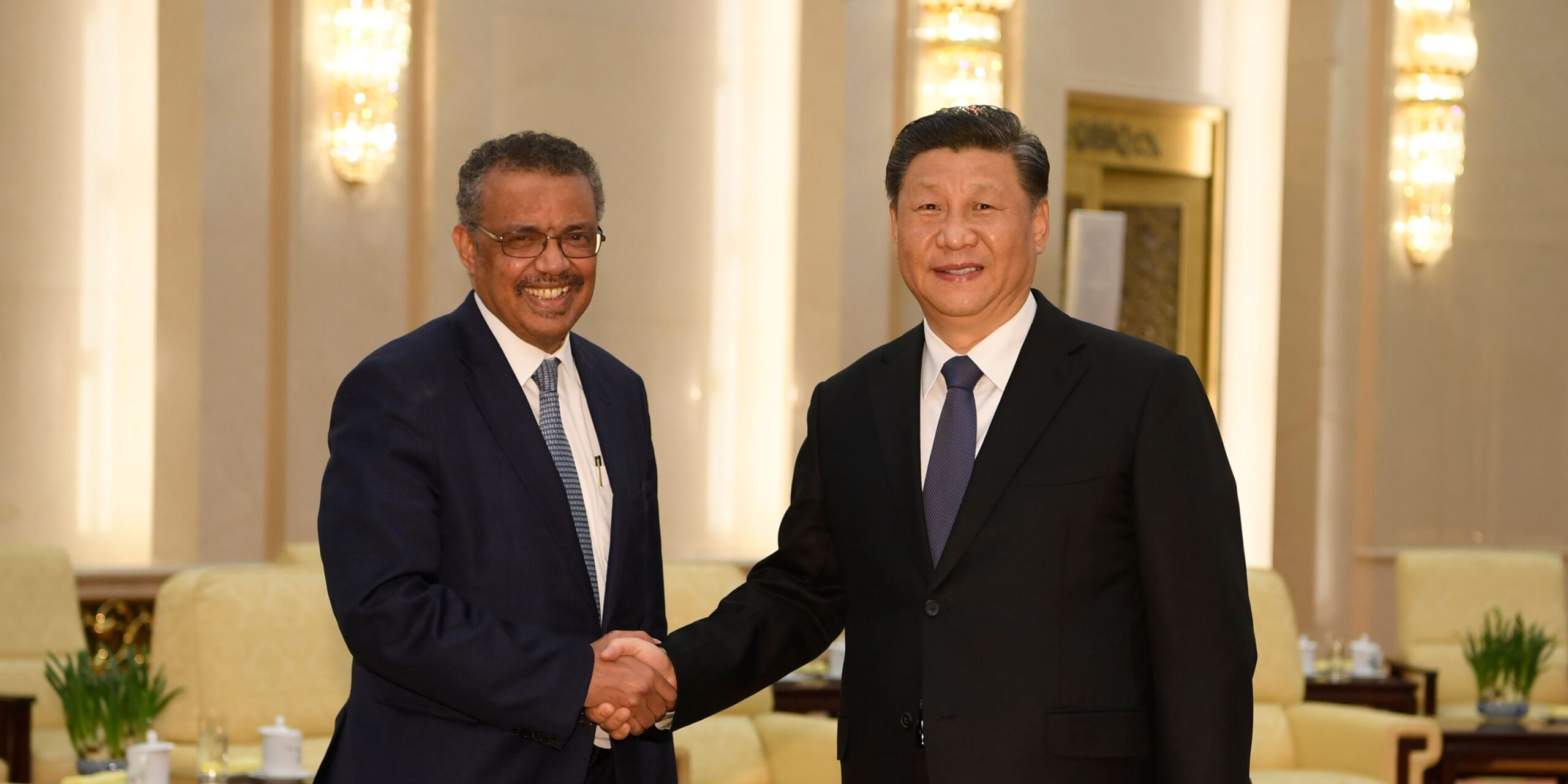 The Covid-19 pandemic captivates us all with unprecedented social and economic repercussions. Roughly half of the world remains under corona lockdown, eagerly awaiting some positive news on the crisis. All eyes are pointed towards the World Health Organization (WHO), the institute created to handle global problems. Instead of helping the world, however, the WHO helped China cover-up up the pandemic in its early stages, and it took a series of wrong decisions endangering global public health. Should the WHO and China be held accountable?

By Arthur Blok and Marco Mattiussi
According to WHO’s a website, the institute was established by the United Nations in 1948 to “provide support for implementing country and community capacities in health and other sectors to manage the health risks associated with emergencies.” This has not been the case in the current corona crisis. The WHO’s mismanagement of the situation and misinformation angers many from all levels of society.

Questionable decisions
Since 2017, the WHO has been managed by director-general Tedros Adhanom Ghebreyesus, a former Ethiopian minister. While campaigning to win the WHO post, Ghebreyesus was accused by health professionals worldwide of covering up cholera epidemics in both Ethiopia and Sudan to avoid embarrassing the two African regimes.

His later decision to appoint - Zimbabwean President Robert Mugabe, with a known record of human rights abuses, as a WHO Goodwill Ambassador was received with widespread condemnation. It was labeled as a ‘campaign return favor.’ He was later forced to reverse the decision.

Fast forward to current days: The WHO chief was vehemently attacked by Donald Trump last month. The American President has called for Ghebreyesus’ resignation and threatened to cut funding to the WHO. Trump, along with his vital Republican supporters and sympathetic media outlets, has recently escalated a months-long campaign accusing the WHO of being biased towards China and has demanded a congressional investigation.

When cases of mysterious viral pneumonia first appeared in Wuhan in November, Chinese health officials silenced whistle-blowers and repeatedly played down the outbreak's severity. At that time, the WHO instantly endorsed China’s claims saying, for example, emphasizing that human-to-human transmission had not been proven and that it was not necessary to halt flights.

After meeting Chinese President Xi Jinping in late January, Ghebreyesus complimented the Chinese authorities for the way they dealt with the crisis and again downplayed - the risks of the virus spreading; his words were that the risks were “‘minimal and slow.” It must be kept in mind that Ghebreyesus did not set foot in the city of Wuhan, the epicenter of the virus.

The WHO experts’ mission to China was only authorized as late as mid-February. To this date, it has been very vague in its reports about the situation on the ground. The experts investigated the virus in less than two weeks after only spending two days in Wuhan, where they were not allowed to explore freely.

This is a very different approach than what happened during the SARS outbreak in 2002 and 2003, infecting roughly 8.000 people worldwide and killing almost 800. Under a different regime, the same WHO pushed the Chinese government from day one to be more transparent by publicly criticizing it for trying to conceal the outbreak.

The apex of the conflict with Trump was reached when the WHO boss criticized the U.S. travel ban to China coming into effect in early February. He labeled any restriction on persons and goods to and from China as ‘measures that unnecessarily interfere with travel and trade.’

It is worth mentioning that, while Ghebreyesus was campaigning for the WHO seat, contributions by China to Ethiopia via various UN programs increased dramatically. His election came amid allegations of heavy lobbying by Chinese diplomats. Incidentally, Ethiopian Airlines was the only airline that never stopped flying to China during the entire crisis.

Unusual delays
All the above could be downplayed as ‘business as usual’ since superpowers, in turn, and at any given time, are constantly making efforts to gain more influence over international institutions. This could be just part of China’s determination to engage more actively in the global scenario in action to substitute what, in their perspective, is an American-dominated world order.

However, Trump’s accusations against the WHO of having delayed a proper reaction to the virus are seen by many as valid and come as no surprise. The WHO finally called Covid-19 a pandemic on March 11th, more than three months after its outburst in Wuhan. This is shockingly late for an organization that should completely control such cross-border issues as per its mandate.

A proper investigation and early measures such as closing all borders with China could have saved tens of thousands of lives across the globe. When Ghebreyesus visited China in late January, the Hubei province and Wuhan, the epicenter of the virus, were already under complete lockdown for weeks; the Chinese authorities very well knew the dangers of spreading.

Accusations of the WHO being China-centric have multiplied in many places, Japan for one. Some senior politicians and analysts have started referring to the WHO as the ‘Chinese Health Organization’ in recent weeks. In addition, Taiwanese officials say the WHO ignored all its early warnings about the virus because China refuses to allow Taiwan, a self-governing island that China claims to become a member of its territory.

In this particular case, the narrative goes further than that. Since China deliberately delayed to properly informing the rest of the world about the absolute magnitude of the problem, an undeniable fact at this point is per-se an unjustifiable act. But having pressured the most critical international institution responsible for safeguarding public health into this same plan goes far beyond that. This will undoubtedly prove in the future.

Some scientists and analysts wonder whether this collaboration could represent a decisive step within the ‘systemic war’ that China has launched against the West. This would not be a conventional war where tanks and soldiers are on the frontline, but a war of information and manipulation to establish the new China-led world order.

US-China Trade Deal & the ‘act of God’
To make the series of wrong decisions even more grievous, in the second week of December, Trump signed off on a long-awaited - phase one - trade deal with China to avoid a looming December 15 tariff deadline. After weeklong negotiations, both sides agreed upon terms such as promises by China to buy more US farm goods and act more efficaciously to stop intellectual property theft. The US offered to slash existing tariffs, which covered roughly $360 billion of Chinese goods, by 50% and planned to affect $156 billion of Chinese goods on December 15.

During negotiations, the Chinese delegation seems to have insisted on an opt-out clause in the treaty. They insisted that if there were any act of God, a pandemic, for example, then their commitment .their commitment to buy could be void. Just a few days later, they formally announced the first Covid-19 case.

Weeks earlier, word came that there was a new virus in Wuhan. Various Chinese whistle-blowers, some of whom were medical doctors, issued warnings. A fair question would be: didn’t the Chinese authorities know that this virus was germinating for weeks in their country? The answer is probably ‘yes’; that is why the moment they announced that they shut down Wuhan, they should have rung the global alarm and suspended all flights. Instead, all of the whistle-blowers were arrested, and most of them have since disappeared or died after getting infected themselves.

Instead of complimenting China for its fantastic approach, the WHO should have alerted the international community and immediately implemented a mission. It should have discredited the local authorities for downplaying the virus as benign as it did with the SARS epidemic in 2002. The halting of all flights to and from China would have prevented Covid-19 from becoming the global pandemic it has become.

In this way, hopefully, world leaders would have made less hurried decisions, with the luxury of time (weeks, maybe months) to consult, study and act in a coordinated way? In this way, they could have arrived at solutions that wouldn’t have involved decisions as catastrophic and unprecedented as stopping all major world economies, one after the other. There is no doubt that, as a result, the Western economic system has never been so fragile as at this moment.

Late last week, China reopened its economy and started lifting most lockdown measures. China will possibly gain an undue economic advantage with the rest of the world in chaos. Earlier this week, the European Commissioner for Competition, Margrethe Verstager, urged countries to protect their companies from Chinese takeovers.

Meanwhile, the Chinese official information machine is working overtime. According to an online post published by two Chinese universities, removed from the web after just a few hours, a central government directive issued a few days ago by Chinese authorities has imposed restrictions on academic research publishing the origins of the Covid-19. In their own words, “Any paper that traces the virus's origin should be strictly managed.” This appears to be the latest effort by the Chinese government to control any objective study to investigate the origin of this disease.

The repercussions of this global crisis will undoubtedly be beyond imagination. Some projects it will cost to the extent of trillions of US dollars with damages similar to a post-war scenario. After analyzing the course of events in the coming weeks and months, will WHO be held accountable for its intentional mistakes?

And, confusion remains: what about China? These questions need to be answered when the West gets the pandemic under control. One idea would be to bring in a special international tribunal to look independently at the facts and decide if. How China, and even the WHO, should pay back the devastation it, deliberately or not, wrecked on the rest of the world.

Arthur Blok is the Executive editor-in-chief of the Levant News, and Marco Mattiussi is an Italian political analyst.