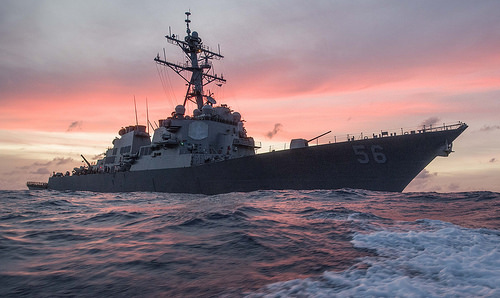 US warship sails close to China-held island in disputed sea

The official told The Associated Press that Chinese vessels were in the vicinity when the USS John S. McCain sailed in a “routine” freedom of navigation operation near Mischief Reef Thursday. It was not immediately clear if the Chinese demanded the U.S. destroyer leave as they have done in the past.

The official spoke on condition of anonymity because the official was not authorized to speak to the press about the matter.

China, which claims the South China Sea virtually in entirety, has protested such U.S. military operations, which President Donald Trump’s administration has continued partly to reassure allies locked in territorial rifts with Beijing.

Tensions escalated a few years ago when China began to build seven reefs, including Mischief, into islands, including three with runways, which the U.S. and China’s neighbors fear could be used to project Beijing’s military might and potentially obstruct freedom of navigation.

The U.S. is not involved in the long-seething disputes in the busy and potentially oil- and gas-rich waters involving China, Brunei, Malaysia, the Philippines, Taiwan and Vietnam. Washington, however, has declared it is in its interest to ensure that the conflicts are resolved peacefully and that freedom of navigation and overflight remain unhampered.

In the latest sail-by, U.S. military officials notified Philippine counterparts of the maneuver, a Philippine official told the AP, adding Filipino forces were not involved.

Philippine marines stationed in a marooned ship on a disputed shoal may have monitored the U.S. Navy operation because they are based near Mischief Reef, the official said.

“That is true in the South China Sea as in other places around the globe,” she said.