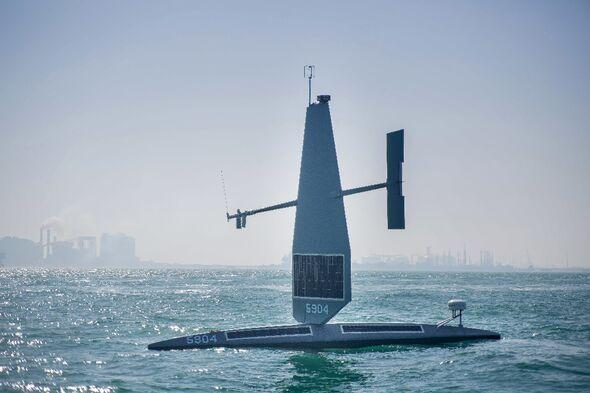 US uses AI to patrol Gulf waters in face of Iran

The year-old program operates numerous unmanned surface vessels, or USVs, in the waters around the Arabian peninsula, gathering data and images to be beamed back to collection centers in the Gulf.

The program operated without incident until Iranian forces tried to grab three seven-meter Saildrone Explorer USVs in two incidents, on August 29-30  and September 1.

In the first, a ship of Iran's Islamic Revolutionary Guard Corps hooked a line to a Saildrone in the Gulf and began towing it away, only releasing it when a U.S. Navy Patrol boat and helicopter sped to the scene.

In the second, an Iranian destroyer picked up two Saildrones in the Red Sea, hoisting them aboard.

Two U.S. Navy destroyers and helicopters quickly descended, and persuaded the Iranians to give them up the next day, but only after stripping cameras from them, according to the U.S. military.

The Iranians said the USVs were in international shipping lanes and were picked up "to prevent possible accidents."

The U.S. Navy said the USVs were operating well out of shipping lanes and unarmed.

Airborne and subsea drones are pretty well developed and proven, but unmanned surface boats are much newer and yet essential for the future, 5th Fleet spokesman Commander Tim Hawkins told AFP.

Since starting last year, the U.S. Navy and regional partners have deployed both slow USVs like Saildrones and battery-powered speedboats like the Mantas T-12.

Equipped with solar panels and sail wings, the Saildrones carry multiple sensors and cameras, and are designed to spend up to a year at sea transmitting data by satellite.

San Francisco-based Saildrone operates around 100 vessels around the world for clients including the Pentagon, major oceanographic institutes, meteorological agencies, and groups studying fisheries and pollution.

"Having circumnavigated Antarctica in 2019 and then having sailed through the eye of a category-four hurricane last year, there really isn’t any maritime environment our drones cannot operate," said Saildrone spokeswoman Susan Ryan.

In the Gulf, Hawkins would only say that they collect information for "enhancing our vigilance of the surrounding seas and strengthening our regional deterrence posture."

But Iranian activities are likely the main target.

The U.S. Navy has sought to prevent Iran from shipping weapons to Yemen's Houthi rebels and other groups, and also helps enforce sanctions on Iran.

The key, Hawkins said, is taking the information collected from all sorts of unmanned sources, in the air, on the ground and on the sea, and making sense of it quickly.

"You need artificial intelligence to pick out what warrants more attention," he said.

Hawkins said it was unclear why only after a year into the program that the Iranians suddenly decide to try to retrieve some Saildrones.

None of what the U.S. is doing is secret, he noted.

The program was announced last September, and in February the 5th Fleet hosted International Maritime Exercise 2022, which brought together 10 countries and more than 80 USVs to try out in the Gulf.

Even so, the U.S. chose to place Task Force 59 in the tension-filled Gulf instead of another less challenging region, and the activities apparently have Tehran bothered.

The U.S. military says the program is in part about developing tactics and doctrines for operating USVs, including learning how to deal with a country like Iran trying to grab them off the sea.

Right now the U.S. operates them with manned surface vessels nearby to deal with interference.

"You can't just go pick up stuff out of the ocean that has a country's flag on it," said one U.S. official.

"If it's the sovereign property of our nation, they have to give it over," the official said.