US troops and Syrian forces battle ISIS near key base

US military advisers and their local Syrian partners killed 21 ISIS terrorists and captured 17 more during a battle near a key strategic base Tuesday, two US military officials told CNN.

A military official with the US-led coalition fighting ISIS told CNN that a convoy of about 10 vehicles was passing through the northern portion of the 55km “de-confliction” zone surrounding the coalition base in At Tanf, Syria, a buffer area that was negotiated by Russia and the US-led coalition.
US-backed local Maghawir Al-Thawra fighters accompanied by US advisers moved to intercept the convoy and identify it. When they discovered that the convoy included ISIS fighters, an intense firefight broke out with about 15 ISIS fighters killed in the initial battle. No coalition forces were killed or wounded, the official said.
The US-led coalition, Operation Inherent Resolve, issued a statement later Thursday saying over 20 ISIS fighters were killed in the battle.
Two US military officials told CNN the number was 21 killed and 17 captured.
A smaller group of ISIS fighters broke off during the fight but were later captured by US-backed forces. Those captured included several foreign fighters from other countries in the Middle East, the official said. A US military official recently told CNN that some 50 foreign ISIS fighters have been captured in Syria and Iraq since November. 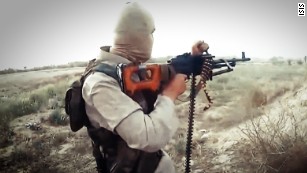 Report details where ISIS gets its weapons
The US estimates that some 3,000 ISIS fighters remain in Iraq and Syria.
The official said that the convoy was moving from east to west when it was intercepted, meaning it passed through territory ostensibly controlled by Russian and Iranian backed Syrian regime troops.
“The Daesh terrorists freely moved through an area controlled by pro-Syrian regime forces. This is the second time in less than a month that convoys of Daesh terrorists, fleeing the middle Euphrates River valley, transited through regime-controlled territory,” the statement from the coalition said.
“Despite the presence of Russian-backed, pro-Syrian regime forces in the area, Daesh still finds ways to move freely through regime lines and pose a threat,” Brig. Gen. Jonathan Braga, the director of operations for the coalition, said in a statement.
“We shall continue to work by, with, and through our partner forces to deny Daesh the ability to regroup and reorganize,” Braga added.
CNN has previously reported that pro-regime forces had established a number of outposts and checkpoints in the area just outside the de-confliction” zone surrounding At Tanf.
Given its location near the borders of Syria, Jordan, and Iraq, the At Tanf garrison is seen as a key strategic location as the US, Iran and Russia compete for influence in the region.
US officials have told CNN they believe pro-regime militias backed by Iran are setting up a series of checkpoints as part of an effort to establish a strategic overland route from Iran to the Mediterranean coast and have sought to eject coalition troops from At Tanf to facilitate this goal, seeking to encourage US-backed local fighters to defect to the regime and conducting probing activities around the base and nearby coalition combat outposts.
The proximity between the two sets of forces led to some clashes in June, including US airstrikes against regime forces who had encroached on the zone and US F-15 fighter jets shooting down two pro-regime drones that were perceived to pose a threat to local allies and their coalition advisers.
Source: CNN
Share