After previously slamming a June report by Amnesty International, the US-led military coalition fighting ISIS is now acknowledging findings by the human rights group that 77 civilians were in fact killed during airstrikes conducted in Raqqa, Syria, last summer.

An investigation prompted by Amnesty International’s research revealed that the 77 civilians were killed in five separate incidents between June and October 2017, according to a coalition casualty report released on July 26.
“The investigation assessed that although all feasible precautions were taken and the decision to strike complied with the law of armed conflict, unintended civilian casualties regrettably occurred,” the coalition report stated.
“Throughout our air and ground campaigns, we have used deliberate targeting and strike processes to minimize the impact of our operations on civilian populations and infrastructure. Our assessments of civilian casualties are transparent, and we hold ourselves accountable through regularly published strike press releases and civilian casualty reports,” the report said. 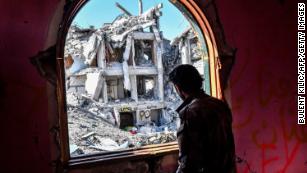 Amnesty International says US-led strikes on Raqqa may amount to war crimes
According to Amnesty International, 24 children and 25 women were among those killed in the aerial bombardments — specific cases documented by the human rights group’s field investigations in Raqqa, including interviews with 112 civilians at the sites of 42 coalition airstrikes.
Initially, the Pentagon pushed back against the findings outlined in Amnesty International’s “War of Annihilation” report, which accused the coalition of killing and injuring thousands of civilians in attacks that it said were at times “disproportionate or indiscriminate,” during the offensive to flush ISIS militants from their de facto capital.
In June, a spokesman for the coalition slammed the report, saying that Amnesty never approached the Pentagon about its findings and was out of line for suggesting the coalition has violated international law.
“They are literally judging us guilty until proven innocent. That’s a bold rhetorical move by an organization that fails to check the public record or consult the accused,” Col. Thomas Veale told reporters at the Pentagon via a video briefing from Baghdad, Iraq.
“They never asked us for a comment, an interview or a courtesy check of the draft. They also failed to check the public record thoroughly,” Veale said.
But the coalition casualty report released late last month indicates that many of Amnesty International’s findings were ultimately deemed credible.
Source: CNN
Total Page Visits: 322 - Today Page Visits: 1
Share

Previous A Top Syrian Rocket Scientist Is Blown Up, and Fingers Point at Mossad
Next Europe: World must hold end of bargain with Iran

UAE sets up a national cybersecurity council amidst regional tensions

The United Arab Emirates on Sunday approved the establishment of a new national cybersecurity council, …