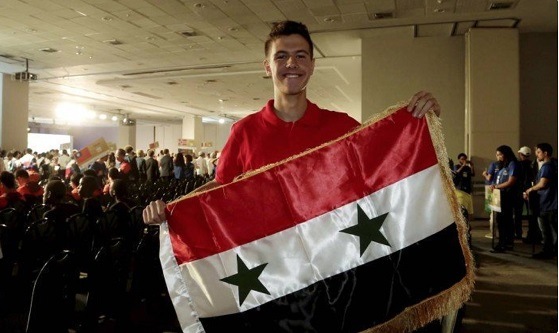 Hafez Al Assad, born in 2001, is the eldest son of the Syrian leader who has ruled since 2000. He is being sanctioned to block the regime from receiving money that would be used to facilitate its activities.

A senior US official said that this is “in line with our previous designations, which include the father [Bashar] and mother [Asma Al Akhras]". "We have seen a rise in his [Hafez] prominence in the family," the official said, adding that adult children and family members of senior regime figures “have continued to conduct business on behalf of their parents”.

Also designated is Mr Al Qattan, a prominent businessman whose companies run malls and real estate projects in Damascus, the Syrian capital. He is being sanctioned under what is known as the Caesar Syria Civilian Protection Act – signed by US President Donald Trump in December – which targets any affiliates of Mr Al Assad.

Al Qattan's name "first emerged within the Damascus business community in July 2017, when his company Muruj Cham Investment and Tourism Group won an auction to re-invest in Qasioun Mall,” the Treasury Department said.

He now holds several contracts with the Syrian government to develop government-owned shopping malls and hotel properties in Damascus. Entities owned by Mr Qattan and affiliated with the regime including hotels, vehicle sales companies, and furniture manufacturing stores have been designated as well.

Along with Mr Al Assad's son and Mr Al Qattan, 12 more individuals and entities were designated under the Caesar Act. These include the head of the First Division of the Syrian Arab Army Zuhair Tawfiq Al Assad and his son Karam. They are being sanctioned for their military's brutal activities during the ongoing war, the State Department said.

Speaking with reporters, Deputy Assistant Secretary of State and Special Envoy for Syria Joel Rayburn said the new sanctions “highlight the corrupt duplicity of the Assad regime. The sanctions are having a chilling effect on outside investment coming into Damascus,” Mr Rayburn said.

Lebanese government
Asked if the US government is willing to offer sanctions exemptions to the Lebanese government for importing electricity from the Syrian regime which now constitutes a violation of the Caesar Act, Mr Rayburn indicated that such requests undergo a thorough review and that no decision has been made yet.

“We have an established process to review exemptions for licenses…we haven’t made any decisions [yet]”, he said. Mr Rayburn warned however, that the bar would be very high to allow waivers that would favour the Assad regime.

The regime, he added, “is not the answer to Lebanon’s electricity difficulties, [a sector] that has to undergo head to toe reforms.”

Another US official commenting on the sanctions urged governments and businesses in the Middle East to take note of such actions, adding that actors in violation of the Caesar Act will be held accountable. The Caesar Act passed the House and Senate with overwhelming bipartisan support last December.