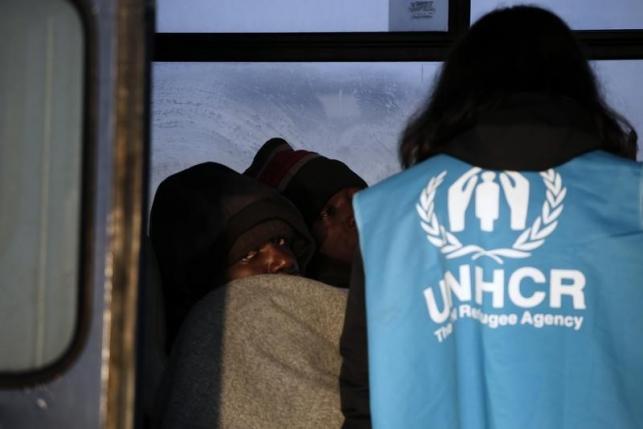 A Congolese refugee looks on as a UNHCR volunteer checks on refugees and migrants rescued at open sea and waiting to be transferred to the Moria registration centre at the port of Mytilene on the Lesbos island, Greece March 21, 2016. Picture taken March 21. REUTERS/Alkis Konstantinidis

THE LEVANT NEWS — LESBOS, GREECE | BY KAROLINA TAGARIS FOR REUTERS — The United Nations refugee agency said on Monday it would not operate in “detention centers” on the Greek island of Lesbos for migrants and refugees arriving from Turkey, dealing a blow to the European Union’s agreement with Ankara last week.

The UNHCR said migrants and refugees were being held against their will at the reception facilities on Lesbos, and it would no longer transfer them there. The European Union-Turkey deal has crossed a red line in its policy, the UNHCR said.

The deal, in effect since Sunday, is aimed at putting new arrivals in Greece who seek asylum on a fast-track for processing.

Until Sunday, arrivals to Lesbos had been free to leave the Moria migrant camp and head for ferries to the mainland from where they would mostly head north via the Balkans in a bid to reach western Europe, particularly Germany.

Now, they are supposed to be held in Moria or one of four other centers set up on the Aegean islands of Samos, Chios, Leros and Kos, pending the outcome of their asylum applications.

“UNHCR is opposed to the mandatory detention of all arrivals as alternatives to detention on these islands are or should be made available,” a UNHCR spokesman on the island told Reuters in a statement.

“We have taken a principled decision to disengage from transportation to and from Moria, as since Sunday, freedom of movement is not guaranteed,” he said.

The UNHCR will continue providing assistance to refugees and migrants on Lesbos’s shoreline and in the port, and will focus on “monitoring and counseling” at Moria, he said.

The UNHCR is concerned that the EU-Turkey deal was “prematurely implemented”, it said, and that Greece does not currently have the systems in place on its islands to assess asylum claims nor the proper conditions in place to accommodate people awaiting the decision.

As of Sunday, just two buses were available to transport the arrivals to Moria, one belonging to the coast guard and one to the police, a senior port police official said.

Early on Tuesday, 129 refugees and migrants who had been rescued at sea by a coast guard patrol boat and taken to the port waited for some 40 minutes for the buses to arrive.

They sat on the dock shivering, men dressed in thin trousers and jackets and women wrapped up with scarves. Many were barefoot and soaked to their knees.

One, a young man named Zalmai, said he had left Afghanistan with his five-member family.

“(There are) a lot of problems in our country. We’re coming for a better life,” he said, putting on a jumper given to him by volunteers and wrapping a thick grey blanket around his waist.

Using his finger to imitate a knife across his throat, he said: “I’m not going back to Turkey, to Afghanistan. Please, I’ll stay here.”

An Afghan woman named Elhan, who was rescued earlier on Tuesday by a vessel of Frontex, the EU border agency, pleaded with Greek authorities not to deport her. “If they deport us, we will come back to arrive in Germany,” she said.

More than 147,000 people, many fleeing conflict in the Middle East and Asia, have arrived in Greece by sea this year, 59 percent of these women and children, according to UNHCR.

On Monday, Turkish monitors arrived on Lesbos to help put the deal into practice. On Tuesday, the Czech Republic offered 10 asylum experts and 30 police officers plus humanitarian aid to Greece, its state secretary for EU affairs said.

A spokeswoman for the U.N. children’s fund UNICEF told a briefing in Geneva on Tuesday the fund was concerned about this new agreement and the implications for children.

“They are not just numbers, (they) need to be taken into protective care, need to be promptly identified, treated with full assessment of their rights … before any decisions taken before on their return, including on return issues.”

(Additional reporting by Jan Lopatka in Prague and Stephanie Nebehay in Geneva; Editing by Hugh Lawson)