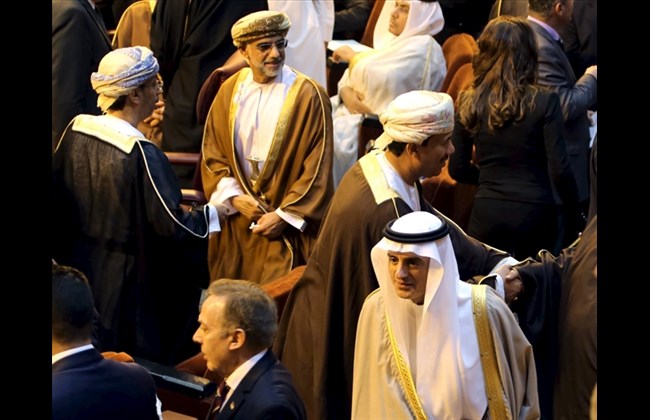 Jubeir, right, enters the conference room during the foreign ministers’ meeting at the Arab League in Cairo.

THE LEVANT NEWS — CAIRO/RIYADH: Arab foreign ministers condemned attacks on Saudi diplomatic missions in Iran and warned Sunday that the country would face wider opposition if it continued its “interference” in the internal affairs of Arab states. “Iran has to decide what kind of neighbor it wants to be: a good neighbor or a chaotic neighbor and so far it behaves like the latter,” UAE Foreign Minister Sheikh Abdullah bin Zayed al-Nahyan said following an emergency Arab League meeting in Cairo. Nahyan referred to the sacking of Riyadh’s embassy and consulate by demonstrators angered over its execution of Sheikh Nimr al-Nimr, a prominent Shiite preacher and opposition leader, earlier this month.

Saudi Foreign Minister Adel al-Jubeir said that cutting commercial and diplomatic ties was a first step, and that his country would discuss potential further actions against Iran with its regional and international allies. He gave no further details.

If Iran continues to support “terrorism, sectarianism and violence,” it would face opposition from all Arab countries, Jubeir told a news conference following the meeting.

He confirmed that some countries had offered to mediate in the dispute but suggested that such efforts were unlikely to make any progress.

“With regards to mediation, there are some states that have expressed their readiness to conduct this, but the important thing is seriousness with regards to the Iranian position,” he said.

Sunday’s session was requested by Saudi Arabia to discuss the attacks. The ensuing crisis has seen Saudi Arabia and several Arab states cut or downgrade diplomatic ties with Iran.

“Iran doesn’t have qualms and doesn’t hesitate to using the sectarian card as a way to dominate the region, and interfering in the internal affairs of Arab countries,” said Nahyan, who led the emergency meeting. In the closing news conference, Jubeir stressed that Iran has no right to speak out for Shiite minorities in the region because at the end of the day they are Arab citizens.

“The attacks came after inciting statements from Iranian officials against the kingdom,” Jubeir told fellow ambassadors in opening remarks before the session was closed to reporters. “What happened was not because of the execution of a Saudi citizen,” the minister said, referring to Nimr.

He added that tensions with Iran only began after the 1979 Islamic Revolution which overthrew the secular Iranian Shah Mohammad Reza Pahlavi and brought to power a conservative Shiite regime.

In a closing statement distributed after the meeting, the Arab League also referred to the reported discovery by Bahrain of a militant group that it said was backed by Iran’s Revolutionary Guard.

All members of the Arab League voted in favor of the statement, with the exception of Lebanon, where Iranian-backed Hezbollah is a powerful political force.

The statement did not agree on any specific joint measures against Iran but set up a smaller committee comprising the Arab League secretary-general and representatives from Egypt, the United Arab Emirates, Saudi Arabia and Bahrain to follow up on the row.

They are expected to meet again on Jan. 25 in the UAE, Arab League Secretary-General Nabil Elaraby said at the news conference.

Saudi Arabia and Iran said Sunday that the regional row between the two countries would not affect international efforts to end the war in Syria.

The U.N. envoy for Syria, Staffan de Mistura, said in a statement after meeting Iranian Foreign Minister Mohammad Javad Zarif in Tehran that Iran had assured him that the row would not upset talks set for later this month.

Jubeir at Sunday’s meeting also said he did not expect the diplomatic row to affect peace efforts.

Tensions between the Sunni kingdom of Saudi Arabia and Shiite Iran have escalated since Saudi authorities executed Nimr on Jan. 2, triggering outrage among Shiites across the Middle East.

In response, Iranian protesters stormed the Saudi Embassy in Tehran and its consulate in Mashhad, prompting Riyadh to sever relations. Tehran then cut all commercial ties with Riyadh, and banned pilgrims from traveling to Mecca. Other Arab countries have downgraded ties or recalled envoys to Iran in solidarity with Saudi Arabia.

The six-nation Gulf Cooperation Council expressed their “total support” Saturday for Saudi Arabia in its diplomatic row with Iran.