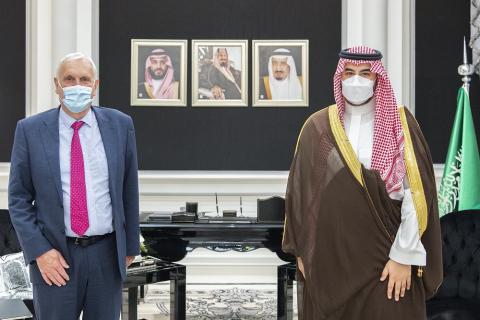 Britain’s special envoy for the Gulf Edward Lister is leaving his role and departing the government, a Downing Street spokesman said in an emailed statement late on Friday.

Lister, a close aide of British Prime Minister Boris Johnson, was appointed as the special envoy for the Gulf only in February and was also appointed as chief of staff for an interim period prior to that.

The statement from Downing Street made no mention of the reason for Lister’s departure, but the development, reported first by the Daily Telegraph https://bit.ly/3dNAL0Q, comes as Lister faced increasing scrutiny from the press over his work in the private sector.

“The Prime Minister is hugely grateful for Lord Lister’s dedicated service over many years. He has been an outstanding servant to the country, to the Government and to the Prime Minister when he was Mayor of London”, a Downing Street spokesman said in the statement late on Friday.

The Telegraph reported earlier that Lister’s departure came at a time when connections between government figures and the private sector are being scrutinised.

The newspaper reported that it was learnt recently that Lister held talks about a six-figure contract with Finsbury Glover Hering, a public relations and lobbying firm, which has two offices in the Middle East.

Finsbury could not be reached outside normal business hours.