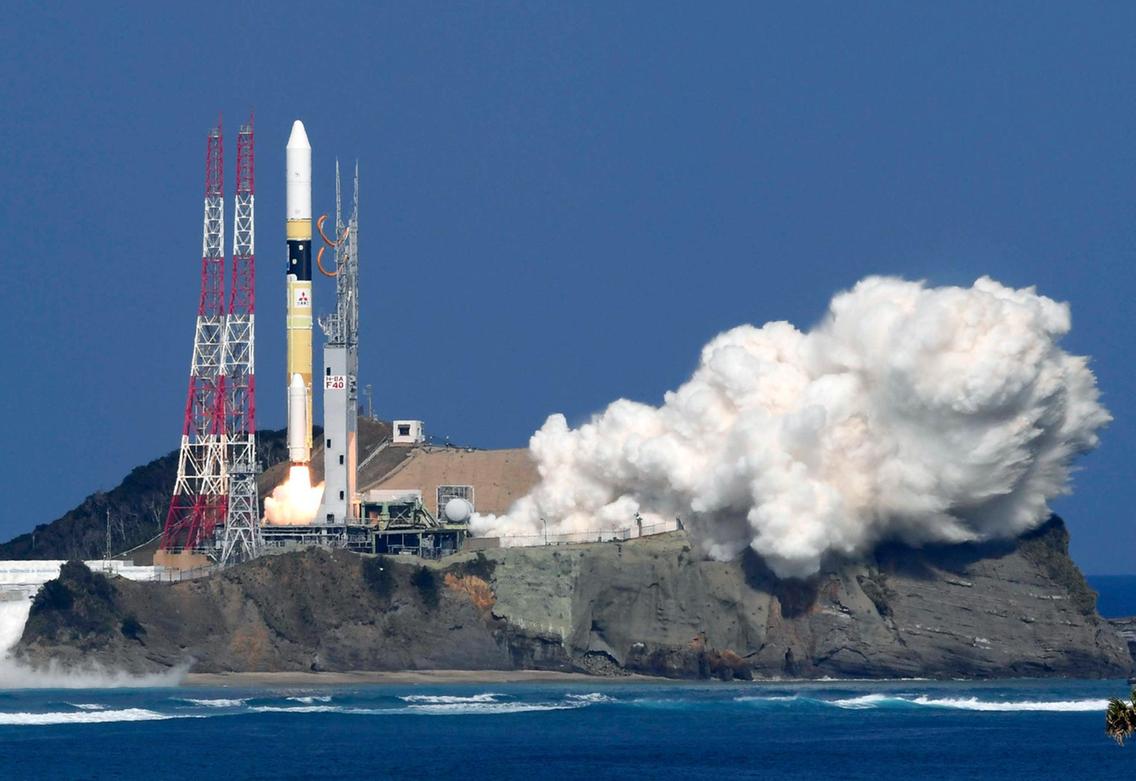 Marking a new milestone that adds to the UAE’s achievements and a new phase in the development of the national space sector, the Mohammed bin Rashid Space Centre, MBRSC, announced the successful launch of the Emirati satellite KhalifaSat into orbit. KhalifaSat is the first Emirati satellite to be 100 percent developed at the facilities of MBRSC in the UAE by Emirati engineers.

One of the most advanced earth observation satellites, KhalifaSat was launched from the Tanegashima Space Centre in Japan, aboard the H-IIA rocket at 1:08 pm Japan time (8:08 am UAE time).

H.H. Sheikh Hamdan bin Mohammed bin Rashid Al Maktoum, Crown Prince of Dubai, Chairman of Dubai Executive Council and MBRSC Chairman followed the first contact made by the satellite with the ground station at the Centre.

Sheikh Hamdan congratulated President His Highness Sheikh Khalifa bin Zayed Al Nahyan, His Highness Sheikh Mohammed bin Rashid Al Maktoum, the Vice President, Prime Minister and Ruler of Dubai, His Highness Sheikh Mohamed bin Zayed Al Nahyan, Crown Prince of Abu Dhabi and Deputy Supreme Commander of the UAE Armed Forces, and the entire nation on this achievement. The Dubai Crown Prince said that this accomplishment is another milestone in securing a bright future for the nation. He noted the UAE has all the assets required to achieve excellence in advanced sciences.

Sheikh Hamdan added, "Today, we celebrate a significant national achievement. This project has been 100 percent developed by Emiratis. The UAE is a key partner in the global efforts to make the world a happier and better place through scientific advances. We thank the team that launched KhalifaSat and encourage them to work harder to bring more achievements to this great nation."

The launch of KhalifaSat was attended by Dr. Ahmad bin Abdullah Humaid Belhoul Al Falasi, Cabinet Member, Minister of State for Higher Education and Advanced Skills and Chairman of the Board of Directors of the UAE Space Agency; Hamad Obaid Al Mansoori, Chairman of MBRSC; Khalid Al Ameri, UAE Ambassador to Japan; Yousuf Hamad Al Shaibani, Director-General of MBRSC; Dr. Mohammed Nasser Al Ahbabi, Director-General of the UAE Space Agency, and Salem Humaid Al Marri, Assistant Director-General for Scientific and Technical Affairs at MBRSC KhalifaSat entered into a low earth orbit at an altitude of approximately 613 kilometers at 9:33 AM, 85 minutes after its launch. The first signal was successfully received at the ground station at the Mohammed bin Rashid Space Centre. At a later stage, KhalifaSat will capture and deliver high-quality detailed images of Earth to the ground station at MBRSC, Dubai. At 70cm per pixel panchromatic and 2.98 metres per pixel in multi-spectrum, KhalifaSat can provide images that meet the highest international standards. These detailed high-resolution images can help government and private sector organisations get accurate data for monitoring environmental changes, detecting the effects of global warming, ensuring responsible urban planning and management, and aiding relief efforts at times of natural disasters. These images can also support the effort to achieve sustainable development goals and improve the quality of life.

KhalifaSat is two metres high and weighs only 330 kg. Its speed is estimated at 7km/s, which enables it to orbit the Earth almost 14 and a half cycles daily. It has bagged five patents and developed seven space innovations that have given the satellite an enhanced digital camera; fast image download and high-speed communication capabilities from its position anywhere above the world; an automatic satellite control system with increased storage capacity; a satellite positioning technique that allows it to simultaneously capture multiple 3D images; as well as advanced target positioning for capturing high quality images with pinpoint accuracy and high speed.

Hamad Obaid Al Mansoori said, "We are proud of the successful launch of KhalifaSat, which bears the name of His Highness Sheikh Khalifa bin Zayed Al Nahyan, President of the UAE. Launching this satellite during the Year of Zayed emphasises the determination of Emiratis to achieve the vision of the late Sheikh Zayed bin Sultan Al Nahyan, who believed that building a nation begins with investing in its people who are the foundation of any development and real progress. His legacy is continued through the wise leadership of His Highness Sheikh Khalifa bin Zayed Al Nahyan, President of the UAE; His Highness Sheikh Mohammed bin Rashid Al Maktoum, Vice President and Prime Minister of the UAE and Ruler of Dubai; and His Highness Sheikh Mohamed bin Zayed Al Nahyan, Crown Prince of Abu Dhabi and Deputy Supreme Commander of the UAE Armed Forces. We are guided by the vision of our leadership to make the UAE one of the best countries in the world. We are honoured to reflect this vision in our projects and achievements and today’s success cements MBRSC’s contribution to the UAE’s advancement and leadership in developing satellites."

KhalifaSat contains an advanced positioning system that allows a large number of 3D images to be captured at once, with excellent accuracy and speed. The images will be used to monitor environmental changes and the impact of global warming, effectively manage urban planning, and support relief efforts during natural disasters. It also has a large storage capacity and ability to download images and data at high speed, allowing more images to be captured in less time.

Commenting on the launch, Yousuf Al Shaibani said, "We dedicate this new Emirati achievement to our wise leadership who believes in the capabilities of young Emirati men and women. The leadership has provided them with all the necessary resources to design and build the first Emirati satellite at the Mohammed bin Rashid Space Centre. We also dedicate this achievement to His Highness Sheikh Hamdan bin Mohammed bin Rashid Al Maktoum, Crown Prince of Dubai and President of the Mohammed bin Rashid Space Centre, who closely monitored the progress of the design and launch of KhalifaSat. His support and encouragement were instrumental in unleashing the capabilities of the team that built one of the most advanced satellites. KhalifaSat is another milestone in the UAE's space journey and its programme to develop space technologies and sciences."

The hexagonally designed satellite is powered by four deployable solar panels attached to the sides of the satellite bus. There are two decks within the structure, as well as an upper sun shield made of a carbon fibre reinforced polymer (CFRP) that protects the sensitive camera system from temperature fluctuations and radiation.

Amer Al Sayegh said, "KhalifaSat has demonstrated that Emiratis are capable of enhancing the UAE’s position as a global hub for the space industry. It has also proved the success of Mohammed bin Rashid Space Centre’s strategy of preparing and training Emiratis to develop innovations. Their innovations have made KhalifaSat a pioneering satellite with exceptional advantages in terms of weight, image quality and clarity, and speed of downloading and analysing data. These features have made it one of the best in its category, and a real scientific and technological icon. I congratulate all the team members who have contributed to developing KhalifaSat and followed up on its successful launch. I also thank the management of Mohammed bin Rashid Space Centre for their unlimited support in all the stages of this major project."

The MBRSC ground station in Dubai supports KhalifaSat and its functions from Earth. The ground system includes three main subsystems: Antenna and Radio Frequency (RF) subsystem, Mission Control Station (MCS), and Image Receiving and Processing Station (IRPS). The main function of the Antenna & RF subsystem is to transmit imaging orders, give commands to the satellite, receive information and download images through the X-band feed.