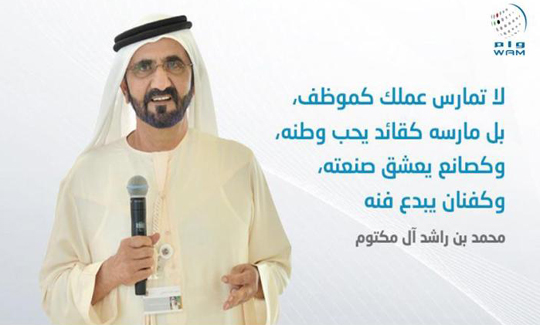 His Highness Sheikh Mohammed bin Rashid Al Maktoum, Vice President, Prime Minister and Ruler of Dubai, attended part of the “Achieve the Unimaginable” motivational event at the Coca-Cola Arena in Dubai, which attracted more than 10,000 attendees from 46 countries.

Hosted by the Mohammed bin Rashid Centre for Leadership Development ,MBRCLD, the grand motivational event, in which star speakers share their inspirational stories and expertise, aims to provide practical guidance and training that enable participants to discover and unleash their potential. The event falls in line with Dubai’s vision of building an inspired generation filled with positivity.

On this occasion, His Highness Sheikh Mohammed bin Rashid highlighted the importance of such motivational events as a means of guidance and empowerment.

“The UAE is a role model for motivating generations. We want to bring about positive change to the lives of people,” His Highness added.

“We start with this event with the aim to create a unique sector that focuses on events that fall in line with UAE’s spirit of achieving the unimaginable,” he concluded.

The “Achieve the Unimaginable” motivational event hosted world-renowned life coach Tony Robbins as the main speaker alongside Nick Vujicic and Prince EA, and singer and best-selling author Alicia Keys. The speakers shared their inspirational stories with an engaging audience.

Tony Robbins is an entrepreneur, a New York Times bestselling author, philanthropist, and one of the world’s leading life and business strategist while Alicia Keys has sold over 40 million records and won 15 Grammy awards.

Prince EA, an international keynote speaker and filmmaker, has been named in the Forbes 30 under 30, while Nick Vujicic, born without arms or legs, is also a New York Times best-seller and has inspired millions around the world.

The Mohammed bin Rashid Centre for Leadership Development (MBRCLD) was set up in 2003 with the intent of “Creating leaders for tomorrow”. Today, the Centre witnesses the benefits of the seeds it sowed in the development programmes that were delivered in the form of Emirati leaders in senior positions both in federal and local agencies.

Tags 000 attendees from 46 countries. attended part of the "Achieve the Unimaginable" motivational event at the Coca-Cola Arena in Dubai His Highness Sheikh Mohammed bin Rashid Al Maktoum Prime Minister and Ruler of Dubai vice president which attracted more than 10