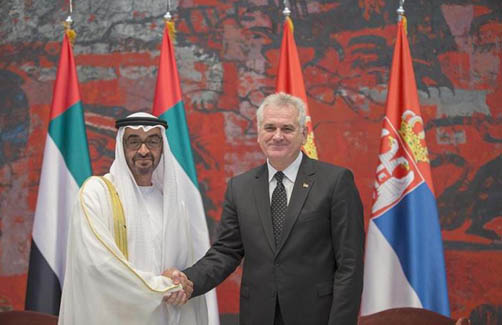 The Serbian capital, Belgrade, today hosted the ministerial meeting of the first session of the “UAE-Serbia Joint Committee.”

The meeting was headed by Dr. Sultan bin Ahmad Sultan Al Jaber, Minister of State, and Siniša Mali, Minister of Finance of Serbia.

Al Jaber also highlighted the importance of the role of the UAE’s leadership in consolidating its bilateral relations with Serbia, as well as the country’s diverse economy and available investment opportunities, especially new opportunities in the energy sector.

He expressed the UAE’s keenness to promote investments between the two countries and discover more investment opportunities in Serbia, especially in promising export sectors, such as mining, industry and information technology.

During the meeting, both sides addressed a series of promising investment models for the Emirati business sector in Serbia, including the Al Dahra Company’s investment in the agricultural and food sector in 2018, valued at EUR150 million, as well as an investment by Eagel Hills in the Belgrade Waterfront Project, and Masdar’s investment in the “Tesla Wind Power Generation Project.” They also discussed the role of the Khalifa bin Zayed Al Nahyan Foundation in offering development aid to leading projects in Serbia.

In his speech, Mali welcomed the visit of Dr. Al Jaber and his delegation while highlighting the keenness of the Serbian government to develop and consolidate its friendship with the UAE, which has a leading regional and international stature.

He added that the visit has special importance, due to its role in strengthening and consolidating the bilateral relations between the two countries and enhancing their strategic cooperation, especially in the areas of the economy, trade, investment, society and culture.

At the end of the meeting, both sides signed several Memorandums of Understanding, MoUs, most notably one that aims to encourage investment and create work opportunities, and another that aims to promote cooperation in the veterinary field.

Dr. Al Jaber also met with Rasim Ljajić, Deputy Prime Minister and Minister of Trade, Tourism and Telecommunications of Serbia, to discuss the means of strengthening their bilateral relations and new opportunities created by the growth of the UAE’s economy.

Both sides addressed a range of topics of common interest, such as the economy, trade, culture and society, as well as the means of developing them.

The diplomatic relations between the UAE and Serbia began officially on 21st March, 2007, and the UAE inaugurated its diplomatic mission in Belgrade on 11th April, 2014.

The foreign relations between the UAE and Serbia are characterised by exponential growth, and the bilateral trade between the two countries witnessed a cumulative annual growth of around 39 percent between 2014 and 2017, rising in value from US$31.2 million to $83.2 million.

Emirati investments in Serbia amounted to around $4 billion, through direct investments and strategic partnerships in several sectors.