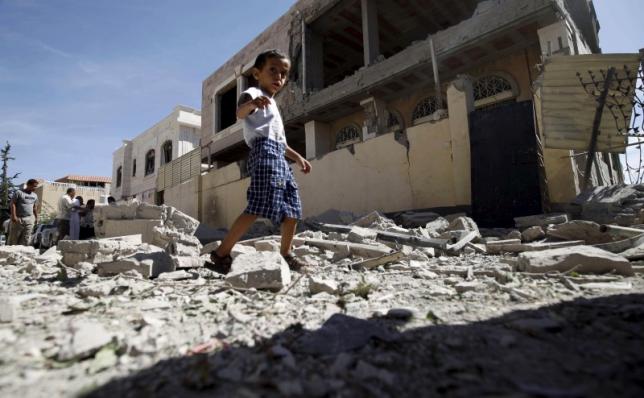 A boy walks past the a house damaged by a Saudi-led air strike in Yemen's capital Sanaa, September 12, 2015. REUTERS/Mohamed al-Sayaghi

UAE Announces “War Is Over” in Yemen as Talks Falter

The Levant News — The United Arab Emirates announced that, in its view, the war in Yemen is winding down, possibly signaling a drawdown for its participation in operations in the Saudi-led intervention. The UAE Minister of State for Foreign Affairs, Anwar Gargash, said in remarks released yesterday that the “war is over” (or “practically” over, in a different version of the speech) and that Emirati forces were now focusing on “monitoring political arrangements” and “empowering Yemenis in liberated areas.” The Emirati military has been particularly active in efforts to recapture areas of the country occupied by al-Qaeda in the Arabian Peninsula, and at least 80 Emirati troops have been killed in the intervention, which began in March 2015. Emirati troops remain in Yemen and are currently guarding strategic military positions.

Despite the Emirati announcement, the warring parties in Yemen seem no closer to reaching a negotiated settlement, and the internationally-recognized government is reportedly close to walking out of U.N.-backed peace talks in Kuwait. Yemeni Foreign Minister Abdul Malek Al Mikhlafi said that the talks have gone nowhere and “are revolving in a vacuum.” Earlier this week, the release of a three-point roadmap for a settlement proposed by the U.N. Yemen envoy was delayed due to disagreements between the parties. “The gap remains wide between the two sides,” a Western diplomat told AFP.

The U.S. State Department has initiated a review of the terrorist designation of Yemen’s Houthi …