Foreign diplomatic missions of labour-sending countries will have counters at Dubai’s main amnesty centre in Al Aweer to facilitate the early repatriation of residents overstaying their visas from August 1, Gulf News has learnt.
However, those seeking to legalise their residency status during the upcoming amnesty will not have to visit Al Aweer centre. Instead, they can proceed to the Amer centres in Dubai.

On Wednesday, more details on the three-month amnesty emerged after the General Directorate of Residency and Foreigners Affairs in Dubai (GDRFA) held a meeting with the representatives of diplomatic missions from labour-sending countries in Dubai. 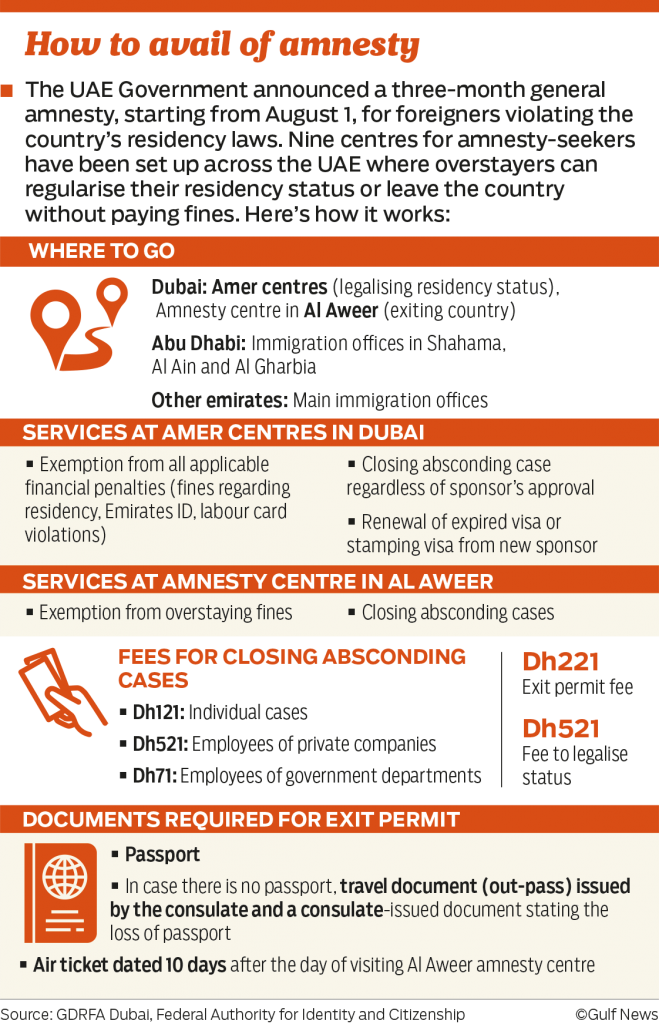 Maj-Gen Al Merri informed the representatives of the procedures of receiving the violators’ requests and the facilities provided by the GDRFA.
They were told that their consulates will be provided facilities to set up counters at the amnesty centre to facilitate the amnesty for visa violators exiting the country.
Procedures explained

A document in different languages explaining amnesty procedures in Dubai was also handed over to the consular representatives.
According to the one-page manual, a copy of which was seen by Gulf News, Al Aweer centre will only handle cases of undocumented residents who wish to leave the country without fines and a ban.
They can clear the absconding cases against them, if any, and get exemption from overstaying fines at this centre.
Those seeking to regularise their visa status in this amnesty period, however, can approach the Amer centres of the GDRFA.
Currently, there are 41 Amer centres located in different areas in Dubai, according to the call centre of the GDRFA.
These centres will provide all services, including cancellation of fines for violations related to residency, Emirates ID and labour permit.
Applicants can clear the absconding cases against them, if any, and can also renew expired visas or stamp new visas at these centres.
The manual also detailed the documents required and the fee structure for various amnesty services. [See graphic].
Elaborate arrangements

During the meeting on Wednesday, an inspection tour of the elaborate arrangements made for the reception of residents during the amnesty period from August 1 to October 31 was also organised. The facilities included separate halls for male and female applicants, a flight reservation office, apart from facilities for people with special needs and for emergency medical services.
In a press release on the meeting, Maj-Gen Al Merri stated: “(The) cooperation with the consulates in Dubai will contribute significantly to conveying our message to violators of the need to cooperate with the authorities concerned to change their [residency status] without hesitation or fear, and to respond to all their inquiries.”
Brigadier general Khalaf Ahmad Al Gaith, assistant director-general, Violators and Foreigners Follow-up Section in Dubai, appealed to residency violators to take advantage of the opportunity to amend their status to avoid legal action by visiting the designated offices.

Yet more sanctions slapped on Iran by outgoing Trump

The United States on Friday imposed sanctions on companies in Iran, China and the United …