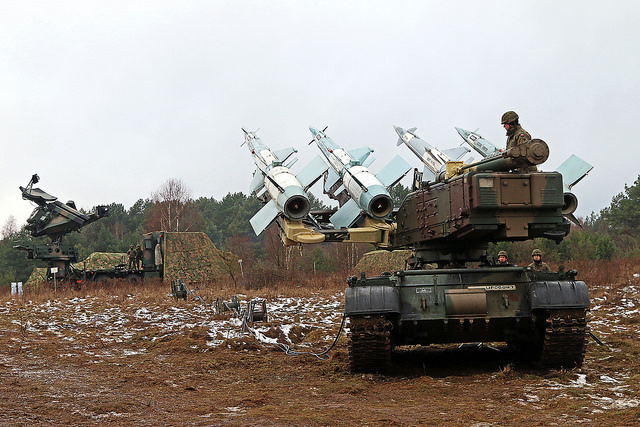 U.S. Pulling Some Missile-Defense Systems Out of Mideast

The Pentagon is removing U.S. missile systems from the Middle East next month, U.S. military officials said, a move that will leave American allies with fewer defenses as the White House ramps up its rhetoric against what it says are threats posed by Iran.

Defense Secretary Jim Mattis is pulling four Patriot missile systems out of Jordan, Kuwait and Bahrain next month in a realignment of forces and capabilities as the military steps up its focus on threats from China and Russia, according to multiple senior military officials.

The relocation of the systems out of the Middle East, which hasn’t been previously disclosed, is one of the most tangible signs of the Pentagon’s new focus on threats from Russia and China and away from the long-running conflicts in the Middle East and Afghanistan.

Two Patriot missile systems will be redeployed from Kuwait, and one each from Jordan and Bahrain, officials said. Patriots are mobile missile systems capable of shooting down missiles and planes.

The four systems have been taken offline and will be redeployed by next month, officials said. There are no plans for any of them to be replaced, and they are being returned to the U.S. for refurbishing and upgrades, an official said.

Although some Patriot systems will remain in the region, officials said the removal of the four batteries amounts to a major drawdown of the capability Patriots provide in the region.

The missile systems have been used for mostly defensive purposes, to protect not only U.S. bases and installations in those countries but also as an effective defense for allies. Their removal comes as the White House intensifies its rhetoric against Iran and amid an increasingly complex battlefield in Syria.

The State Department on Tuesday issued a 48-page report that detailed threats posed by Iran, including its missile programs. The report said Iran maintains “a stockpile of hundreds of missiles that threaten its neighbors in the region.”

Bahrain is home to a large naval base and the Pentagon’s Fifth Fleet, which conducts operations around the Persian Gulf and Middle East. Thousands of American military personnel are based in Kuwait, and special forces and other forces operate inside Jordan. The Pentagon routinely declines to provide more specific numbers for troop deployments overseas, officials said.

“U.S. Central Command is strongly committed to working with our allies and partners to promote and provide regional security and stability,” said Capt. Bill Urban, a spokesman for the command in Tampa, Fla. “U.S. Forces remain postured to conduct operations throughout the region and to respond to any contingency.”

Capt. Urban said that “due to operational security concerns, we’re not going to discuss the movement of specific capabilities into and out of the U.S. Central Command area of responsibility.”

Patriot systems provide what is known as “point defense,” meaning they provide defensive capabilities for a smaller radius to shoot down aircraft. The newer version of the Patriot, the PAC-3, can shoot down missiles. With a range of only dozens of miles, they are typically located near the base or location they are intended to protect, officials said.

Patriot systems owned by Saudi Arabia are used there frequently, for example, regularly shooting down missiles fired from Yemen, where a civil war has raged since 2015.

American allies in the region have depended on such missile-defense systems for years. The systems play both a real and symbolic role in countering the threat posed by nearby Iran. Bahrain, in particular, has grown concerned about Iran-backed groups and other Shiite militias destabilizing the small island nation.

Some months after Mr. Mattis arrived at the Pentagon last year, he informed Gen. Joseph Votel, the head of Central Command, or Centcom, as it is known, that it was time to shrink the number of forces and capabilities in the Middle East and South Asia so they could be realigned to counter global competitors Russia and particularly China.

At the same time, Patriot systems in the Gulf may not serve the purpose they once did, said Anthony Cordesman, senior fellow at the Center for Strategic and International Studies, a think tank in Washington, D.C. That is in part because Iran lacks the kind of missile capability required to level precision attacks.

In addition, if the Patriot deployments to the Gulf region were intended mainly for air defenses, that threat simply doesn’t exist as it once did, he said. Iran now is no match for U.S. allies in the Gulf region, which have superior air forces.

“The truth of the matter is that if Iran lets loose with semi-guided missiles, they’re doing it against air forces that are really well-equipped to strike back,” Mr. Cordesman said.