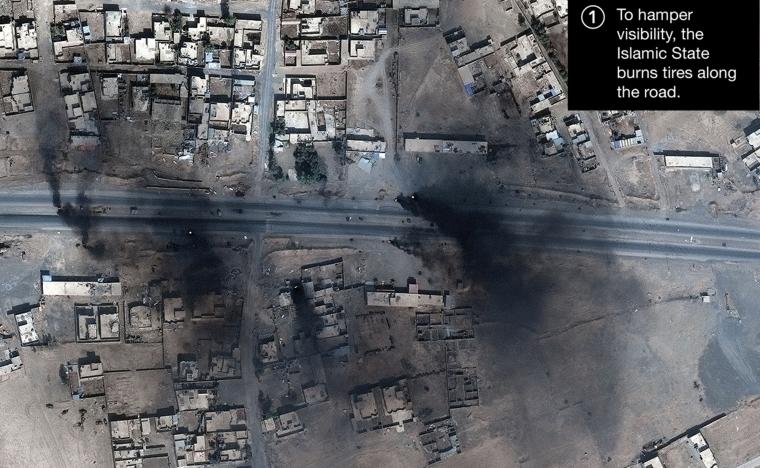 Smoke is seen in this satellite image of the city of Mosul in Iraq on October 18, 2016. Courtesy of Stratfor.com/AllSource Analysis/DigitalGlobe/Handout via REUTERS

By Phil Stewart and Idrees Ali for REUTERS| WASHINGTON — The United States expects Islamic State to use crude chemical weapons as it tries to repel an Iraqi-led offensive on the city of Mosul, U.S. officials say, although adding that the group’s technical ability to develop such weapons is highly limited.

U.S. forces have begun to regularly collect shell fragments to test for possible chemical agents, given Islamic State’s use of mustard agent in the months before Monday’s launch of the Mosul offensive, one official said.

In a previously undisclosed incident, U.S. forces confirmed the presence of a sulfur mustard agent on Islamic State munition fragments on Oct. 5, a second official said. The Islamic State had targeted local forces, not U.S. or coalition troops.

“Given ISIL’s reprehensible behavior and flagrant disregard for international standards and norms, this event is not surprising,” the second official told Reuters, speaking on condition of anonymity, and using an acronym for Islamic State.

U.S. officials do not believe Islamic State has been successful so far at developing chemical weapons with particularly lethal effects, meaning that conventional weapons are still the most dangerous threat for advancing Iraqi and Kurdish forces – and any foreign advisers who get close enough.

Sulfur mustard agents can cause blistering on exposed skin and lungs. At low doses, however, that would not be deadly.

Roughly 5,000 U.S. forces are in Iraq. More than 100 of them are embedded with Iraqi and Kurdish Peshmerga forces involved with the Mosul offensive, advising commanders and helping them ensure coalition air power hits the right targets, officials said. Still, those forces are not at the front lines, they added.

The fall of Mosul would signal the defeat of the ultra-hardline Sunni jihadists in Iraq but could also lead to land grabs and sectarian bloodletting between groups that fought one another after the 2003 overthrow of Saddam Hussein.

U.S. President Barack Obama estimated on Thursday that perhaps 1 million civilians were still in Mosul, creating a challenge for Iraq and its Western backers trying to expel the group through force.

“If we aren’t successful in helping ordinary people as they’re fleeing from ISIL, then that makes us vulnerable to seeing ISIL return,” Obama told reporters in Washington.

The International Organization for Migration’s Iraq chief, Thomas Weiss, said on Tuesday he expected Islamic State militants to use Mosul residents as human shields and lent his voice to concerns about the dangers of chemical agents.

The IOM had not managed to procure many gas masks yet, despite those risks, Weiss said from Baghdad.

“We also fear, and there has been some evidence that ISIL might be using chemical weapons. Children, the elderly, disabled, will be particularly vulnerable,” Weiss said.

Attacking Iraqi forces are still 12 to 30 miles (20 to 50 km) from the city itself and U.S. officials believe that Islamic State is most likely to use chemical weapons later in the campaign, in what could be a difficult, protracted battle.

The leader of Islamic State was reported to be among thousands of hardline militants still in the city, suggesting the group would go to great lengths to repel the coalition.

American officials believe some of Islamic State’s best fighters are in Mosul.

Previous I will not vote for Aoun: Speaker Nabih Berri
Next Russian parliament approves suspension of plutonium accord with U.S.