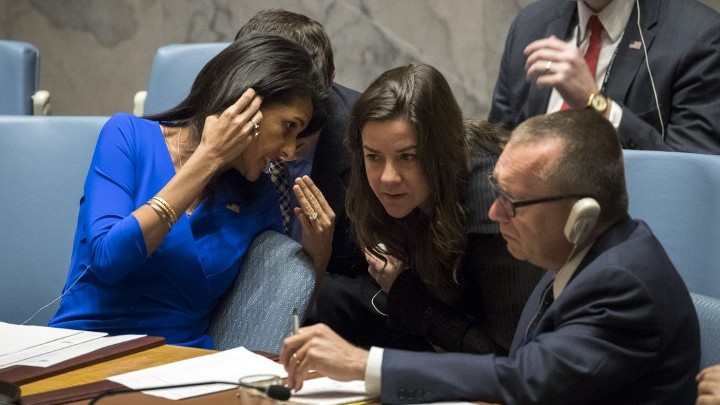 U.S. Ambassador to the United Nations Nikki Haley on Thursday called on countries to suspend providing weapons to Myanmar over violence against Rohingya Muslims until the military puts sufficient accountability measures in place.

It was the first time the United States called for punishment of military leaders behind the repression, but stopped short of threatening to reimpose U.S. sanctions which were suspended under the Obama administration.

“We cannot be afraid to call the actions of the Burmese authorities what they appear to be - a brutal, sustained campaign to cleanse the country of an ethnic minority,” Haley told the U.N. Security Council, the first time Washington has echoed the U.N.’s accusation that the displacement of hundreds of thousands of people in Rakhine State was ethnic cleansing.

Myanmar rejects the accusations and has denounced rights abuses.

“The Burmese military must respect human rights and fundamental freedoms. Those who have been accused of committing abuses should be removed from command responsibilities immediately and prosecuted for wrongdoing,” Haley said.

“And any country that is currently providing weapons to the Burmese military should suspend these activities until sufficient accountability measures are in place,” Haley said.

Myanmar national security adviser Thaung Tun said at the United Nations on Thursday there was no ethnic cleansing or genocide happening in Myanmar. He told the Security Council that Myanmar had invited U.N. Secretary General Antonio Guterres to visit. A U.N. official said Guterres would consider visiting Myanmar under the right conditions.

China and Russia both expressed support for the Myanmar government. Myanmar said earlier this month it was negotiating with China and Russia, which have veto powers in the Security Council, to protect it from any possible action by the council.

Meanwhile, international aid groups in Myanmar have urged the government to allow free access to Rakhine, where an army offensive has sent more than 500,000 people fleeing to Bangladesh, but hundreds of thousands remain cut off from food, shelter and medical care.

Aid groups said on Thursday the total number of refugees in Bangladesh was now 502,000.

The Myanmar government has stopped international aid groups and U.N. agencies from carrying out most of their work in the north of Rakhine state, citing insecurity since the Aug. 25 insurgent attacks.

Aid groups said in a joint statement they were: “increasingly concerned about severe restrictions on humanitarian access and impediments to the delivery of critically needed humanitarian assistance throughout Rakhine State.”

“We urge the government and authorities of Myanmar to ensure that all people in need in Rakhine State have full, free and unimpeded access to life-saving humanitarian assistance.”

The government has put the Myanmar Red Cross in charge of aid to the state, with the help of the International Committee of the Red Cross. But the groups said they feared insufficient aid was getting through.

Relations between the government and aid agencies had been difficult for months, with some officials accusing the groups of helping the insurgents.

Aid groups dismissed the accusations, which they said had inflamed anger toward them among Buddhists in the communally divided state, and called for an end to “misinformation and unfounded accusations”.

Rights groups have accused the army of trying to push Rohingya Muslims out of Myanmar, and of committing crimes against humanity. They have called for sanctions, in particular an arms embargo.

United Nations Secretary-General Antonio Guterres warned on Thursday that the violence against Rohingya Muslims in the northern part of Rakhine could spread to central Rakhine, where 250,000 more people were at risk of displacement.

Guterres told the U.N. Security Council during its first public meeting on Myanmar in eight years, that the violence had spiraled into the “world’s fastest developing refugee emergency, a humanitarian and human rights nightmare.”

A group of Republican and Democratic senators urged the Trump administration on Thursday to use the “full weight” of its influence to help resolve the Rohingya crisis in Myanmar and Bangladesh.

A letter seen by Reuters and signed by four Republican and 17 Democratic members of the 100-seat Senate also calls on Secretary of State Rex Tillerson and U.S. Agency for International Development Administrator Mark Green to provide more humanitarian aid.

The British Minister of State for Asia and the Pacific, Mark Field, described the situation as “an unacceptable tragedy” after visiting Myanmar and meeting leaders including Nobel laureate Aung San Suu Kyi, who has faced scathing criticism and calls for her Nobel prize to be withdrawn.

Police in Bangladesh said they recovered the bodies of 14 refugees, including nine children, who drowned when their boat capsized off the coast in bad weather. A Reuters photographer said he saw several babies among the victims.

The U.N. International Organization for Migration later put the toll at 15.

Myanmar was getting ready to “verify” refugees who want to return, the government minister charged with putting into effect recommendations to solve problems in Rakhine said.

Myanmar would conduct a “national verification process” at two points on its border with Bangladesh under terms agreed during a repatriation effort in 1993, state media quoted Win Myat Aye, the minister for social welfare, relief and resettlement, as saying.

Myanmar authorities do not recognize Rohingya as an indigenous ethnic group, instead regarding them as illegal immigrants from Bangladesh.

“The government hates us,” said refugee Zafar Alam, 55, sheltering from rain near a refugee settlement in Bangladesh, referring to the Myanmar government.

“I don’t think I’d be safe there. There’s no justice.”