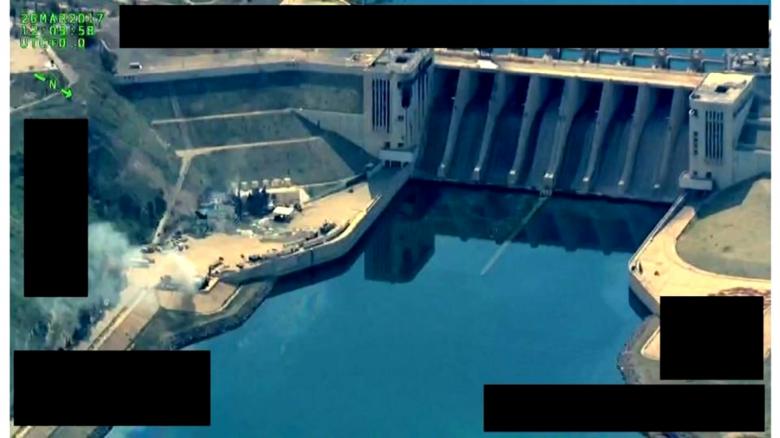 By Ellen Francis and Tom Perry | BEIRUT – The U.S.-led coalition said on Monday it saw no imminent danger to a major hydroelectric dam that allied Syrian militias are fighting to take from Islamic State, unless the jihadists planned to blow it up.

It spoke after a senior Syrian government official warned on Sunday that the Tabqa Dam had already been damaged by U.S.-led air strikes targeting Islamic State and cited an increasing risk of catastrophic flooding and collapse.

For its part, Islamic State said on Sunday that the dam’s operating systems were not working properly and it was vulnerable to collapse.

The U.S.-backed Syrian Democratic Forces, an alliance of Arab and Kurdish fighters, paused operations for four hours on Monday to allow engineers to inspect the Euphrates Dam at Tabqa, a major target in their campaign to encircle and capture Islamic State’s biggest urban stronghold of Raqqa.

An SDF spokeswoman said the dam should be fully captured within days after the forces took its northern entrance last week. Raqqa city is located around 40 km (25 miles) downstream on the Euphrates river to the east.

A Kurdish leader separately told Reuters he expected Raqqa to eventually become part of a new system of federal government being set up by Kurdish groups and their allies, a step certain to deepen Turkish concern about rising Kurdish power in Syria.

The SDF, which includes the Kurdish YPG militia, has been closing in on Raqqa since November with support from coalition air strikes and U.S. special forces on the ground. The YPG has said a final assault on the city will begin in early April.

Neighboring Turkey opposes the Kurdish role in Raqqa, and has been lobbying Washington to take part itself. Washington says no decision has been taken on when and how Raqqa will be captured, even as the SDF approaches the city.

The SDF seized Tabqa air base on Sunday, the first such facility to fall under the control of Syrian Kurdish militias and their allies that now control swathes of northern Syria after six years of multi-sided civil war.

The SDF says it will repair and use the base.

Syria dam not damaged: SDF Raqqa campaign spokeswoman
The SDF’s Raqqa campaign said in a statement the assault on the Tabqa Dam had been put on hold for four hours following a request by the Syrian government’s water authority.

The SDF later said there was no damage or “malfunction” at the dam. The U.S.-led coalition said that “to our knowledge, the dam has not been structurally damaged”.

“We do not assess the dam to be in imminent danger unless ISIS plans to destroy it,” said Colonel Joseph Scrocca, a spokesman for the U.S-led coalition fighting Islamic State, using another acronym for IS.

“The SDF are in control of a spillway north of the dam that provides water to an irrigation reclamation canal which can be used to alleviate pressure on the dam if need be. If the lake reaches dangerous levels the SDF can relieve the pressure through alternative means.”

The director of the Syrian government agency that formerly operated the dam has blamed U.S. air strikes for damage to internal control systems at the dam that had put it out of service.

Syria’s government earlier this month warned of a “looming catastrophe”, saying the dam at Tabqa and another further north were being targeted by the U.S.-led aerial campaign.

The SDF and coalition have denied this.

The United Nations has also flagged concerns about the dam, warning in February of a risk of disastrous flooding, citing risks from high water levels, deliberate sabotage by Islamic State and further damage from coalition air strikes.

The dam stretches 4.5 km (2.8 miles) across the Euphrates river. Islamic State captured the dam and air base at the height of its expansion in Syria and Iraq in 2014.

“Our forces are advancing in a way to ensure the safety of the dam,” Jihan Sheikh Ahmed, the SDF spokeswoman for the Raqqa campaign, said via a social messaging site.

“Islamic State will put up fierce resistance, especially since the dam is strategic,” she said, but the dam “will be liberated in a short period of time … This relates to the developments of the battle, but it should happen within days.”

The SDF has also advanced on Raqqa from the east in recent days, capturing the town of Karama on Sunday.

The political wing of the SDF is helping to set up a predominantly Arab civilian council to run Raqqa after its capture. Kurdish officials told Reuters on Friday the coalition was helping to train a Raqqa police force.

The establishment of a local government allied to the SDF in Raqqa would expand the sphere of Kurdish influence in northern Syria, mirroring governing arrangements put in place in the city of Manbij after its capture by the SDF last year.

Saleh Muslim, the co-chair of the Kurdish PYD party, said he expected Raqqa to eventually join a decentralized system of government being set up by Kurdish groups and their allies, though this would be up to the people of Raqqa.

“We expect (this) because our project is for all Syria … and Raqqa can be part of it,” Muslim said in a telephone interview. “Our only concern is that the people of Raqqa are the ones who take the decision on everything.”

BREAKING NEWS – US ships fire on Iranians near Hormuz straight

A U.S. Coast Guard ship accompanying a guided-missile submarine and other vessels near the Strait …