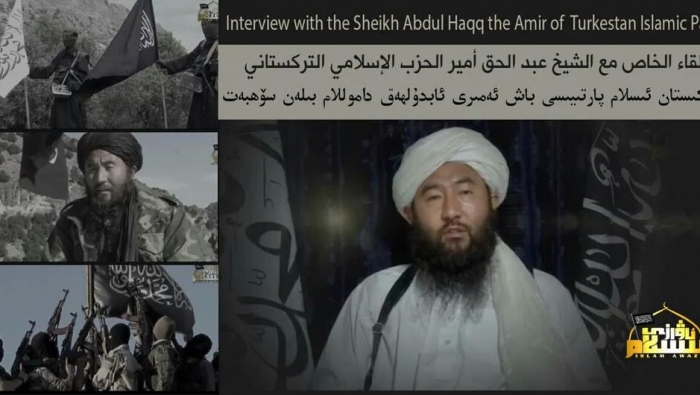 The Turkistan Islamic Party (TIP) has released another message attributed to its emir, Abdul Haq al Turkistani. The audio address, which was posted online on May 30, is the latest indication that Abdul Haq is still in charge of the group.

By Bill Roggio and Thomas Joscelyn
The US thought it killed the TIP’s top man in a 2010 drone strike in Pakistan, but his death was never confirmed.

The TIP claims Abdul Haq was severely injured in the strike and returned to lead the organization in 2014, after recovering from his injuries. He has appeared on at least a few occasions in the TIP’s media since then. [See LWJ report, Turkistan Islamic Party emir thought killed in 2010 reemerged to lead group in 2014.]

In the new speech, the man identified as Abdul Haq calls on his followers to wage jihad “in any corner of the world, wherever they” may be.

Abdul Haq also discusses the TIP’s role in Syria and elsewhere around the globe. He says the group’s primary mission in Syria is to train Muslims to wage jihad against all “enemies of Islam,” so they can help their brothers in “Sham” (Syria).

But the TIP’s members in Syria should also be ready to return to China to fight the government in the western Xinjiang province. The Uighur jihadists must be prepared to wage jihad against the “infidel [Chinese] occupants” in all “spheres,” Abdul Haq says.

He denounces the Islamic State’s so-called caliphate as “illegitimate.” At one point in the TIP video, a still image of Abdul Haq is juxtaposed with images of Abu Bakr al Baghdadi.

The TIP’s emir argues that the Islamic State’s “caliphate” lacks the consent of the Muslim community. Because Baghdadi and his subordinates did not garner the approval of Islamic leaders, Abdul Haq says, their “state” lacks the necessary theological footing. The TIP head also denounces the Islamic State’s wanton killing of Muslims, as well as the “caliphate’s” practice of branding others “apostates.”

“Under the sharia law, a caliphate is not declared by a group of people,” Abdul Haq explains, according to a translation obtained by The Long War Journal. “It will be created on the basis of sharia rules and unity among the ummah [worldwide community of Muslims].”

Al Qaeda and its branches, the Movement of the Taliban in Pakistan, as well as other al Qaeda-allied ideologues have all made this same argument repeatedly.

The IMU’s leader, Uthman Ghazi, officially broke from the Taliban-Al Qaeda axis in Aug. 2015, when he swore allegiance to Baghdadi. The TIP’s video includes footage of Ghazi swearing his fealty to the Islamic State’s “caliphate.” Ghazi is shown on the right side of the screen, with a photo of Abdul Haq on the left.

According to Abdul Haq, the IMU’s decision proved to be disastrous for the group. He chastises the IMU for abandoning its traditional allies in Afghanistan and Pakistan, “choosing the path of war” against the Taliban. Many IMU fighters who sided with the Islamic State were killed in clashes with the Taliban in Afghanistan shortly afterwards. This led to the collapse of the IMU, according to Abdul Haq.

“The Islamic Movement of Uzbekistan, for which the oppressed ummah had great hopes, disappeared,” Abu Haq claims.

Abdul Haq’s critique of the IMU is especially important. The TIP and IMU are known to have fought side-by-side in Afghanistan for years. For example, the United Nations notes that the TIP “has maintained close ties” to the IMU.