Turkey will swallow Syria behind the scenes of negotiations

While Erdogan seeks to hold meetings with Putin and sometimes Rouhani in relation to Syria every two months, the Turkish occupants are actively pursuing a policy of assimilation of the Syrian cities captured during two interventions.

For example, on the twelfth of February, the deputy governor of the Turkish province Kilis arrived in the Turkish-occupied city of Akhterin, located in the north of Aleppo province. 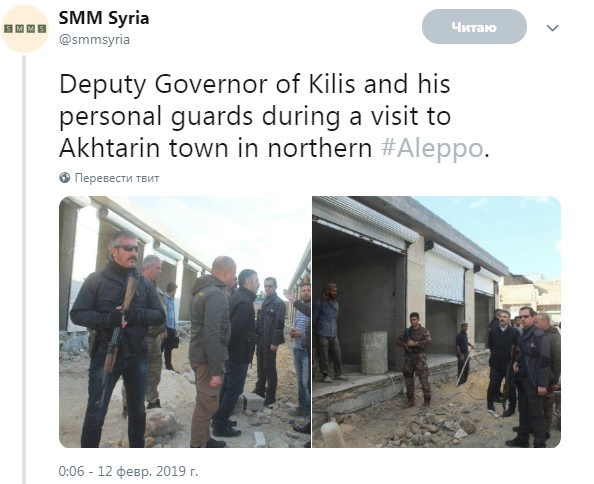 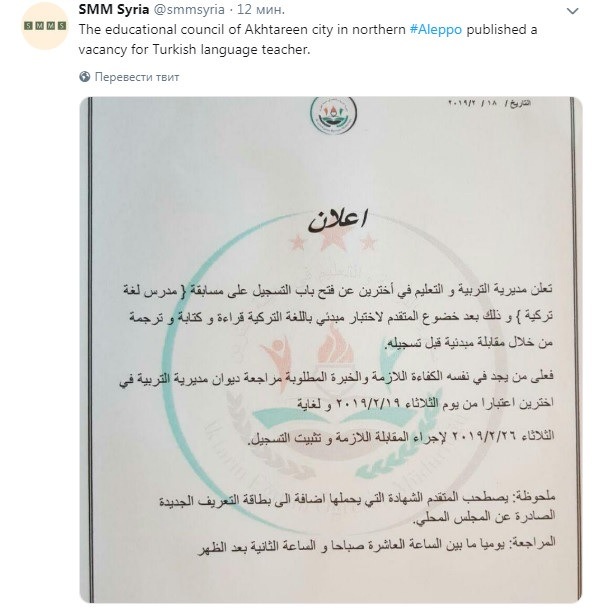 Thus, while Turkey is signing the agreements with Russia relating to the “demilitarized zone” in Idlib, patrolling the neighborhood of Manbij with the Americans and trying to convince the global community of the availability of “Kurdish terror of the Kurdistan Workers’ Party (PKK)” in Syria, an insidious occupation is occurred leading to the merger of the Syrian lands occupied by the Turkish military officers with Turkey. What is this if not an act of aggression? All conversation in explanation of the Turkish occupation related to the alleged threat from Kurdish separatism simply does not fit into the logic of what is happening. It is the Arab cities that are being assimilated, and that by the way finds support among the Americans (it is essential to recall that Turkey is a NATO member and therefore plays politics subject to the American conditions).

“The US authorities promise to give help to Turkey, provided that the current situation in Idlib and Jarabulus is maintained and the regions in the north-west of Syria are re-established. The Americans suggest even holding a referendum in these regions in a few years and, in the case of a positive result, annexing these regions to Turkey. Washington can support this annexation due to pressure on the UN”.

An illustrative example of carte blanche to the Turks from the States in relation to Syria.

Obviously, the attacks from Erdogan and his team against YPG are just an excuse to justify their illegal presence in Syria. While the crisis in Idlib and the confusing situation regarding the fate of Rojava self-proclaimed by the Kurds are continuing, time will play on the side of Ankara and its imperial ambitions.

There are a lot of examples of Turkish plans to change the local socio-political landscape in Afrin alone. Moreover, if we mention the examples of other cities in the north of Syria, then the dots are starting to connect, and it is obvious that the Turks are going to annex the captured lands of Syria. For example, in Al-Bab, the Turks are forcing the study of the history of the Ottoman Empire, and the Turkish lira and dollar are introduced as the local currency. 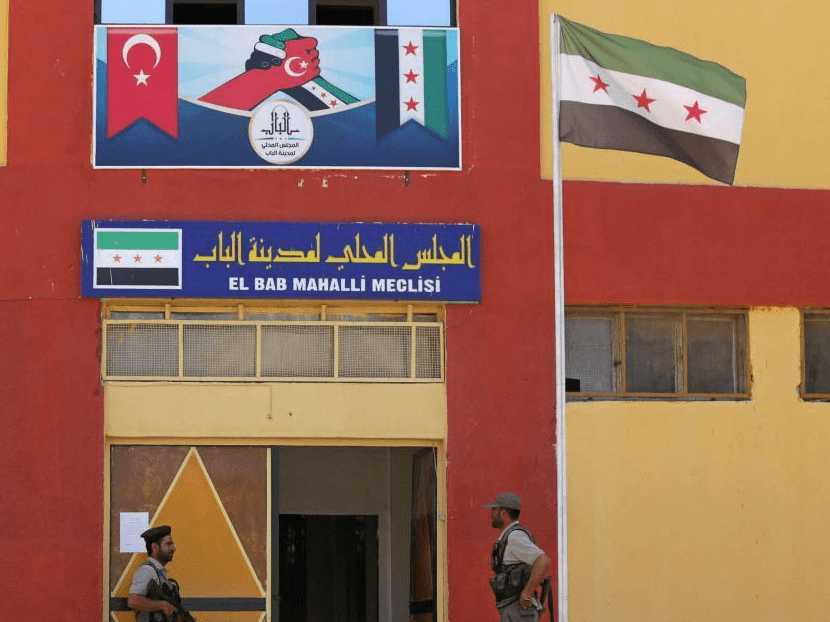 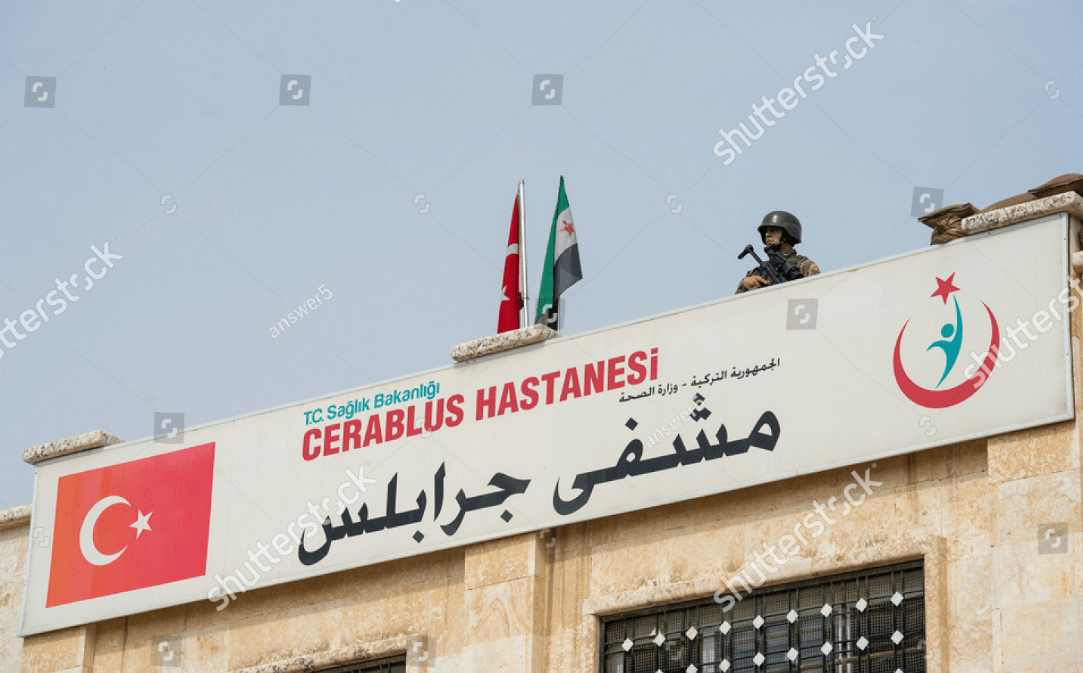 As for the so-called “fight against Kurdish terrorism”, it should be noted that the Turkish military forces delivered the attacks precisely at those places where the breakthrough of the Syrian army and its allies was expected. However, Ankara always “ignores” the place of the real concentration of YPG forces and its part affiliated with PYD. 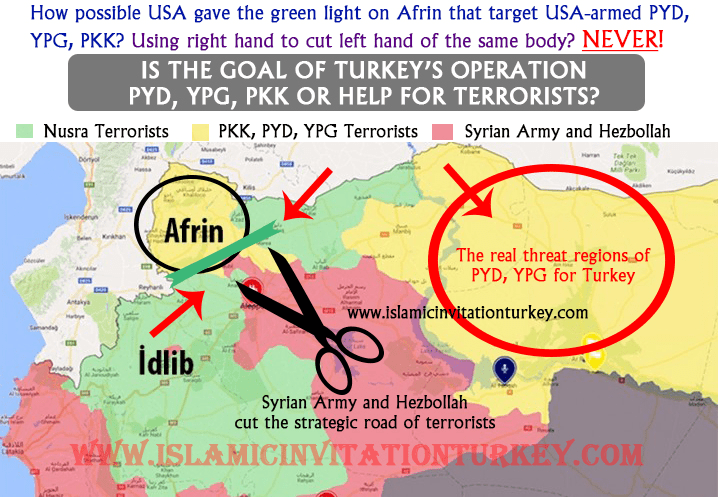 It’s all about their true goals. In the case of Erdogan, his main objective is to settle in the territory of the SAR and develop an anti-Assad platform with the participation of pro-Turkish refugees, while forming the future insurgence for the subsequent conflicts. If at this time it s not possible to overthrow Assad, then it does not mean that the objective is canceled. Apparently, the plans of Erdogan and his team, endless negotiations with Putin in relation to Syria are a part of the strategy where it is necessary to kill the clock to wait for the change of the current leadership of the United States. According to the plans of Erdogan, the new team in Washington shall once again give him the upper hand in the fight against Assad.

The opinions expressed by columnists are their own and do not represent the views of The Levant News.