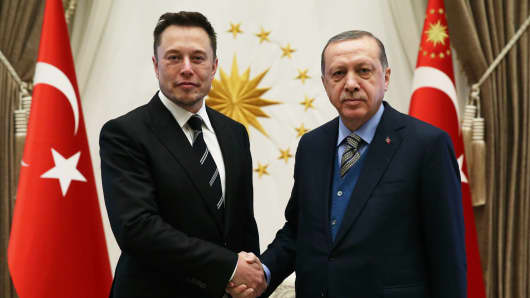 Turkey wants moon landing of its own

Turkey aims to achieve first contact with the moon as part of its national space programme in 2023, President Tayyip Erdogan said on Tuesday.

“The first rough landing will be made on the moon with our national and authentic hybrid rocket that shall be launched into orbit in the end of 2023 through international cooperation,” Erdogan said, detailing a two-phase mission.

Erdogan did not elaborate further on the cooperation. Last month, Erdogan spoke to Tesla and SpaceX boss Elon Musk on possible cooperation in space technologies with Turkish companies.

Speaking in an event in Ankara, Erdogan announced a programme with 10 strategic goals including sending a Turkish citizen to a scientific mission in space.

Last month, Turkey launched its Turksat 5A satellite into orbit from the United States in cooperation with SpaceX. Turksat 5B satellite is planned to be launched in second quarter of 2021.

Turkey aims to reach strategic space goals in 10 years, Erdogan also said, adding that the country will improve work on satellite technologies and establish a space port with other ally countries.

Turkey previously launched reconnaissance and communication satellites set up a satellite systems integration and test center and manufactured a domestic HD satellite called IMECE which is expected to be launched in 2022.