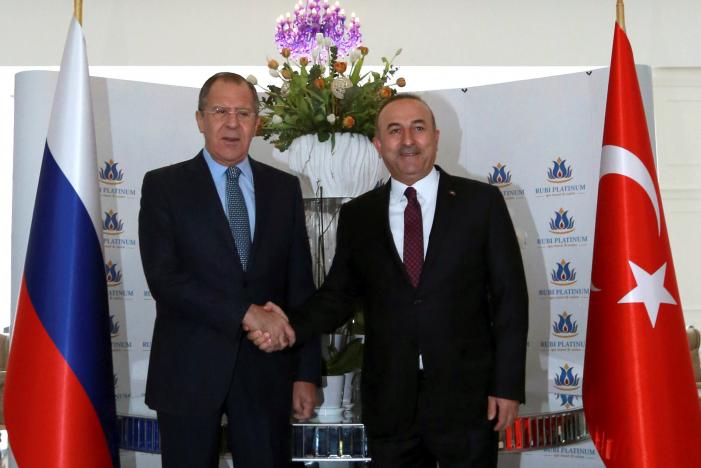 By Tulay Karadeniz | ALANYA, TURKEY – Turkey and Russia, two of the main backers of opposing sides in Syria’s civil war, said on Thursday they agreed on the need for a halt to fighting and the provision of aid in Aleppo but deep divisions remain between them over the conflict.

Turkish Foreign Minister Mevlut Cavusoglu said he and his visiting Russian counterpart Sergei Lavrov agreed on the need for a ceasefire in Aleppo, but added that Turkey’s stance on Syrian President Bashar al-Assad was unchanged.

Russia is a main backer of Assad, while Turkey supports the rebels fighting to oust him. The rebels have come under siege in eastern Aleppo after rapid advances by Syrian government forces in recent days, bringing them to the brink of a major defeat.

“A ceasefire must be achieved in all of Syria, notably in Aleppo,” Cavusoglu told a joint news conference in the Mediterranean town of Alanya, adding Turkey was in agreement with Russia in broad terms on the need for a ceasefire, humanitarian aid and political transition.

Lavrov said the bloodshed must stop in Syria and the region, that Moscow was ready to talk to all parties in the war, and that it would continue cooperating with Turkey. But he also vowed Russia would continue its operations in eastern Aleppo and would rescue the city from what he described as terrorists.

Syrian rebels on Wednesday vowed to fight on in east Aleppo in the face of sudden government advances that have cut the city’s opposition sector by a third.

Turkish President Tayyip Erdogan discussed the situation in Aleppo with his Russian counterpart Vladimir Putin by phone for the third time in a week on Wednesday and agreed on the need for a ceasefire, sources in Erdogan’s office said.

While remaining divided on Assad’s future, Ankara and Moscow have been trying to find common ground on Syria since a rapprochement in August.

Previous Putin curbs anti-Western rhetoric, says wants to get on with Trump
Next The Simla Agreement: Help or Hindrance