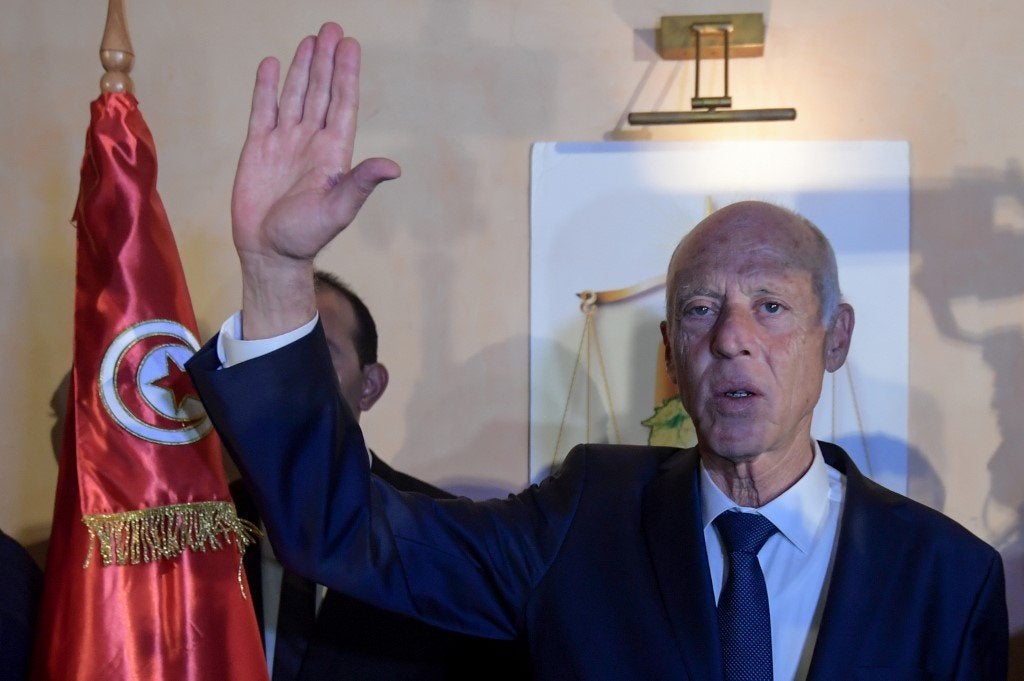 The birthplace of the Arab Spring, Tunisia, slid in less than a year into a newborn dictatorship. A doom scenario for the country, and an insult to the revolution of 2011. It looks like president Kaïs Saied is just a few steps away from crowning himself as the first King of Tunisia.

If that was not enough he ordered security forces this weekend to lock the doors of the Supreme Judicial Council and stopped staff from entering the building. A day after he dissolved it.

The move came after various judges rejected Saied’s decision to disband the council that oversees them, raising fears about the independence of the judiciary amid growing concerns over his consolidation of power.

The Council - one of the few remaining state bodies that were still able to act independently - is now suspended. The move capped months of sharp criticism from Saied of the country’s judiciary, which he has accused of corruption and of being infiltrated by his political enemies.

Saied found it a good moment to dissolve the council and saw it as a “necessity”. Besides a storm of criticism of local politicians and opinion leaders, the Ambassadors of the United States, Canada, France, Germany, Italy, Japan, and the European Union put out a bold joint statement earlier this week in which they declared to be deeply concerned about his behavior.

“A transparent, independent, and efficient judiciary and the separation of powers are essential for a functioning democracy that serves its people, based on the rule of law and fundamental rights and freedom,” the statement said.

Constitutional law
As a constitutional law professor, Saied preached strict adherence to the Constitution. As Tunisia’s president, he has done the opposite and bent it to his will. “What is happening is very dangerous and illegal,” said suspended-independent Member of Parliament Yadh Elloumi who is one of Saied’s most vocal opponents.

“He is not only killing our democracy and the revolution, but he is endangering the country as a whole. By acting in this way he is also jeopardizing state financing. IMF could, for example, block Tunisia’s access to much-needed funds”, he added.

Last month - January 14 - the nation ‘celebrated’ the 11th anniversary of the ousting of former dictator Zine El Abidine Ben Ali. Instead of celebrations a curfew and a ban on gatherings - said to be aimed at stemming the tide of the looming Omicron surge - hollowed-out city streets in an attempt to keep protesters from gathering.

Exactly one year before - January 2021 - the government mandated a similar lockdown, supposedly aimed at keeping case counts low and unrest quiet. An unsuccessful exercise, a few hours after the new lockdown was announced violent anti-government protests broke out all over the country.

Now, roughly one year and one month later, Tunisia’s democracy is further away than ever. Despite this, some Tunisian influential still give Saied the benefit of the doubt. Like Najet Zammouri vice president of the Tunisian Human Rights League and veteran international human rights advocate.

“We still welcome his moves to fight a corrupt and ineffective political system. In my perspective, the Supreme Judicial Council that he dissolved is corrupted and delaying politically sensitive investigations into the 2013 assassinations of Chokri Belaid and Mohamed Brahmi”, Zammouri said.

New parliamentary elections are scheduled for December this year. “I believe that is a reasonable time frame to clean up the corrupt political mess we are suffering from for years. If the elections are not taking place this year we have a serious problem”, she concluded.

Elloumi does not agree with Zammouri’s perspective, he sees Saied as a dictator, not as a democrat. “It is evident by now. The segregation of power is one of the most important determinations in the constitution. Even in the time of former dictator Ben Ali, we had a judiciary that acted more or less independent”, Elloumi said.

“He pretends he is innocent and the savior of the nation, but he is an imminent threat to modern-day Tunisia. What he did was simply unlawful by all national and international standards. He did all this so he can rule alone”, he concluded.

For the time being it looks like Saied is on an unstoppable road to kill the 2011 revolution, despite national and international critics. If he continues down this road he could soon crown himself as Tunisia's first king.

Arthur Blok is the Executive editor-in-chief of The Levant News.