Tunisian Human Rights and LGTB activist Rania Amdouni tried to commit suicide Monday night at her home in Tunis just days after she was released from prison, sources close to The Levant News said. Amdouni was humiliated, intimidated and attacked by a group of police officers and arrested afterwards. In a show trial in March she was sentenced to six months in prison for ‘insulting a public officer’.

By Arthur Blok
Before the failed suicide attempt the Tunisian gay activist posted a suicide not on Facebook. Soon after her good friend Hamza Nasri, a member of the Tunisian Association for Justice and Equality (Damj), rushed to her house and brought her to a hospital in the Montfleury district of the capital. 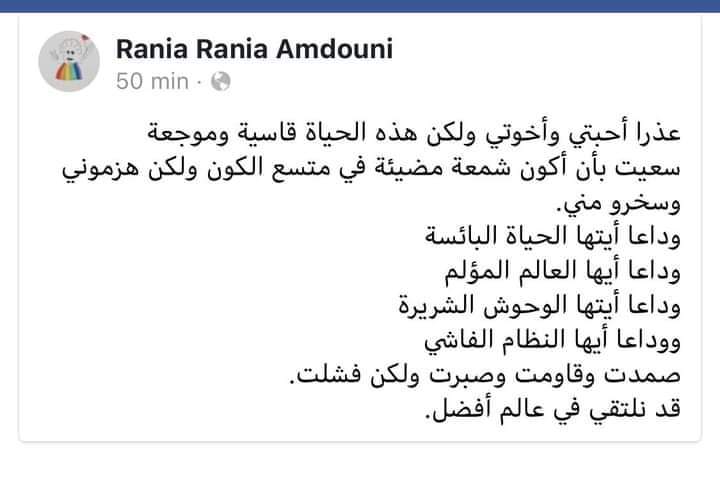 Translated text of the Arabic Facebook post:
‘Sorry my friends. I wanted to be a bright candle in the world, but I was laughed at.
Goodbye sad life. Goodbye nasty monsters. Goodbye fascist system.
I fought, I resisted, but I failed.
Maybe we’ll see each other in a better world one day.’

Soon after the incident Hamza Nasri sent out the following statement about Amdouni’s condition: “Rania is getting better, she is in the intensive care unit of a hospital in the Montfleury quarter of the city. Her condition is stable.”

Nasri works as a program coordinator with the association on promoting vulnerable rights in Tunis. Damj provides legal, psychological and social assistance to the LGTBI community. Nasri: “Being gay is a criminal offence in this country. If you are found guilty you can be sentenced up to three years in prison. One of our main goals is the de-criminalization of homosexuality in Tunisia.”

Rania Amdouni case
On 27 February, Rania Amdouni went to a police station to file a complaint about the continuous harassment she has faced from the police in relation to her LGBT activism and her participation in protests against police violence and deteriorating socio-economic conditions. Instead of registering her complaint, she was arrested.

On 1 March, without being questioned or given the right to challenge her detention, Amdouni was formally charged with ‘insulting a public officer while he was carrying out his duties,’ punishable by up to one year in prison under Article 125 of the Penal Code.

She was also charged with ‘causing embarrassment and disruption’, and ‘visible drunkenness.’ On 4 March, the District Court of Tunis convicted her on all three charges and took her into custody. She is currently imprisoned at the Manouba women’s prison in Tunis.

In a Facebook post published after her arrest and while in custody at the Septième police station, Rania Amdouni said: “I have been arrested because I cannot accept this harassment that I’m subjected to anymore.”

Under international law, ‘insult’ is not a recognizable offense and does not justify a limitation on freedom of expression. In addition, the UN Human Rights Committee has stated that “the mere fact that forms of expression are considered to be insulting to a public figure is not sufficient to justify the imposition of penalties”.

In August 2020, a police officer verbally abused Amdouni, as she walked by a group of officers in downtown Tunis, leading to a verbal argument between the two. This attracted attention from passers-by who then attacked her and three of her friends. The police did nothing to intervene and even incited the violence by using homophobic insults.

Amdouni formally pressed charges and an investigation was opened. However, despite the fact the identities of the officers involved are known, they were not suspended or arrested following the investigation.

Police harassment against her escalated after her participation in socio-economic protests in January 2021. Photos of her standing in front of police officers holding shields during a demonstration on 30 January went viral and unleashed a campaign of online harassment against her based on her gender identity and her appearance.

Najet Zammouri vice president of the Tunisian League of Human Rights (LTDH) is deeply saddened by the course of events in the past 24 hours. “The LTDH deeply regrets the deteriorating Human Rights condition in Tunisia. It is driving young people insane. We hope that what happened to Rania Amdouni is a wake up call for our policymakers”, Zammouri said.

Arthur Blok is the Executive editor-in-chief of the Levant News, contact him @ thelevant2020@gmail.com.