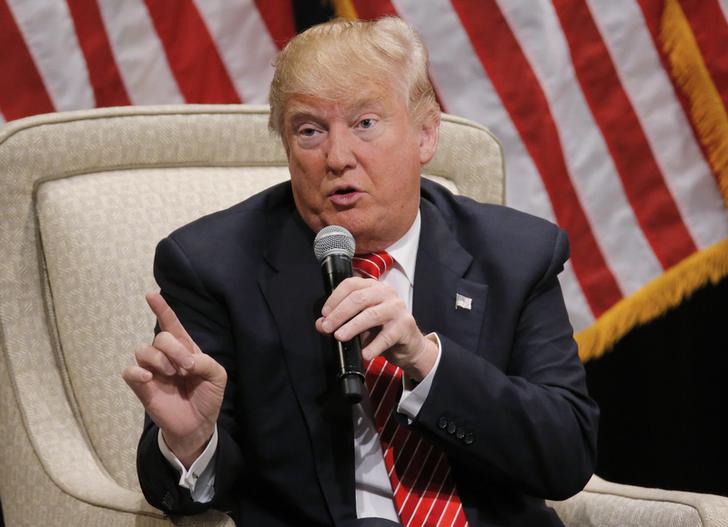 Trump wants to leave U.S. allies in the lurch

By Bill Schneider for Reuters -- Thanks to Donald Trump, Americans now know what a populist foreign policy looks like: “Not isolationist, but America First.” That’s how the Republican presidential front-runner defined his views to an interviewer last week. “I like the expression,” Trump said, implying that he had never encountered the term “America First” before.

“America First” was the slogan that defined U.S. isolationism in the 1930s. The America First Committee was a pressure group that opposed U.S. military intervention against fascism in World War II. It included a lot of Western and Midwestern isolationists, largely, but not all, conservative Republicans.

Its most prominent spokesman was Charles Lindbergh (photo inset), the aviation hero, who was the first person to fly solo across the Atlantic – as well as being a well-known Nazi admirer. The committee disbanded shortly after the Japanese attack on Pearl Harbor, Hawaii, on Dec. 7, 1941.

Since the terror attacks in Brussels on March 22, foreign policy has moved to the top of the U.S. presidential campaign agenda. Americans are beginning to see the basic impulses driving Trump’s foreign-policy views.

Trump is wrong when he says he is not an isolationist. He’s confusing isolationism with pacifism. Isolationism — which was the reigning doctrine of U.S. foreign policy until 1947 — does not mean a refusal to use force. It means a refusal to get involved in other countries’ problems unless they have a direct impact on U.S. national security. If the United States is attacked or threatened, Washington responds with overwhelming and decisive force. Then it gets out.

Trump told the Washington Post editorial board, “I’m a counterpuncher.” Meaning, if I get hit, I’m going to hit back harder. That’s how he runs his campaign.

And that would be the ruling principle of his foreign policy: If America gets hit, it hits back harder. And if someone threatens to hit America, Washington hits them first.

Isolationism has deep popular resonance in the United States. It was a driving force behind the American public’s opposition to the Vietnam War and the wars in Iraq. They were unpopular wars because the United States ended up getting involved in other countries’ civil wars. The populist impulse is “Win or get out” — but don’t get involved.

Trump horrified the editors of the Washington Post when he said he wanted to renegotiate the North Atlantic Treaty Organization (“We certainly can’t afford to do this anymore”). When asked whether the United States gains anything by having military bases in South Korea and Japan, Trump replied, “Personally, I don’t think so.” He said South Korea is “a wealthy country” that he has “great relationships with” (“I have buildings in South Korea”). Trump’s complaint? “We are not reimbursed fairly for what we do.”

Former Secretary of State Hillary Clinton accused Trump of “turning our alliances into a protection racket.” The Democratic presidential candidate described Trump’s policy as: You pay us and we’ll protect you.

Trump’s approach to Islamic State (or, as he calls it, ISIS,) exhibits the key markers of isolationism. “I would knock the hell out of ISIS in some form,” he told the Post’s editors. “I would rather not do it with our troops, you understand that. Very important.”

His idea is to use unrestrained U.S. air power and get Muslim countries to provide the ground troops. Trump said he would find it “very, very hard” to send thousands of U.S. ground troops to the Middle East, even if the generals at the Pentagon recommend it.

There are Muslim militias fighting on the ground — Kurds, for example — but Muslim countries have been unwilling to send ground forces, except Iran. How would Trump persuade other countries to commit troops? He threatens to halt oil purchases and end the U.S. alliance with Saudi Arabia unless it commits ground troops. “Without us,” Trump told the New York Times, “Saudi Arabia wouldn’t exist for very long.” That’s called blackmail.

That’s how he justifies shifting positions on issues like the war in Iraq. He doesn’t like to be predictable.

But military alliances are based on predictability. If a NATO ally is attacked, the attacker has to know that the United States will retaliate. “We need steady hands,” Clinton told the American Israel Public Affairs Committee (AIPAC) last week, “Not a president who says he’s neutral on Monday, pro-Israel on Tuesday and who-knows-what on Wednesday because everything is negotiable.”

Suppose Russia were to attack Estonia, a member of NATO. Would Washington really send troops to defend little Estonia, population 1.3 million, as the NATO treaty obliges us to do? Trump asks, “Why are we always the one that’s leading, potentially, the third world war with Russia?”

The whole point of NATO is that Russia can’t be certain we won’t come to Estonia’s aid. (The issue did not come up with Ukraine, because it is not a member of NATO.)

Trump is repudiating the entire framework of U.S. foreign policy since 1947. That’s when President Harry S. Truman committed the United States to lead the free world in the Cold War struggle against communism. The United States repudiated its isolationist past and became the principal guarantor of international order and humanitarian values.

The establishments of both political parties continue to defend that commitment. Clinton told AIPAC, “We need America to remain a respected global leader, committed to defending and advancing the international order.”

But the Cold War is over, and Trump sees no necessity for Washington to continue to bear that burden. “NATO was set up when we were a richer country,” he said. “We are a poor country now.”

During the debate in 2013 over a U.S. military strike to punish Syria for using chemical weapons, Benjamin Rhodes, President Barack Obama’s deputy national security adviser, said, “The U.S. for decades has played the role of undergirding the global security architecture and enforcing international norms. And we do not want to send a message that the United States is getting out of that business in any way.”

That’s precisely the message Trump is sending. And millions of Americans seem eager to endorse it.