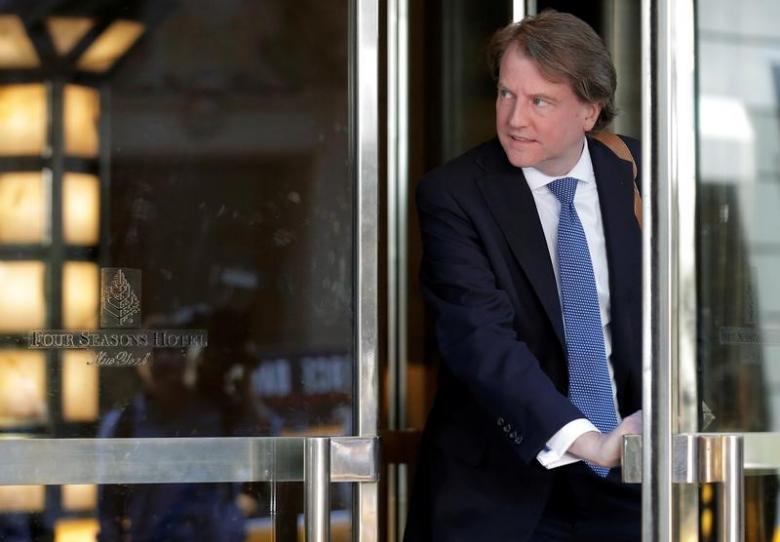 McGahn, a former chairman of the Federal Election Commission, had been the chief counsel of the Trump campaign and was one of the few members of the Republican establishment to embrace the outsider candidate.

While Trump during his campaign frequently promised to "drain the swamp" of the political establishment in Washington, McGahn has an extensive history in the capital, especially in conservative politics.

McGahn served for years as counsel to the National Republican Congressional Committee, the arm of the Republican Party that oversees campaigns for the U.S. House of Representatives.

During his time at the FEC, McGahn was an advocate for loosening restrictions on campaign spending and was widely praised for opening up more of the commission’s internal processes to the public.

Along with providing guidance on ethics issues, the White House Counsel's office advises the president on the legality of proposed executive orders and legislation passed by Congress and vets potential administration appointees, including Supreme Court justices.

“Don has a brilliant legal mind, excellent character and a deep understanding of constitutional law,” Trump said in a statement.

Trump, a businessman who has never held public office, has real estate and leisure holdings all over the world, sparking concerns that his investments could color his decision-making in office. Trump has said that he will hand over day-to-day responsibilities of running his company to his children, but he has resisted calls to place his assets in a blind trust.

Trump also has expressed interest in finding a way to bypass a federal anti-nepotism law in order to give his son-in-law, Jared Kushner, a formal White House role.

When Trump met with President Barack Obama earlier this month, Obama advised Trump during their Oval Office chat that his White House counsel would be an important job.

Trump has vowed to reverse Obama’s executive orders in a number of areas, including immigration and gun control. He also must nominate someone to fill the vacancy on the Supreme Court left by the death of Justice Antonin Scalia. McGahn will be tasked with shepherding the nominee through confirmation hearings.

Trump, who is spending the Thanksgiving holiday weekend at his home in Palm Beach, Florida, also continued to round out his national security team on Friday, naming Kathleen Troia "K.T." McFarland, as his deputy national security adviser.

McFarland served in three Republican administrations and was an aide to Henry Kissinger in the 1970s. A strong backer of Trump during the election campaign, McFarland will work with Lieutenant General Michael Flynn, Trump’s pick as his national security adviser.

The appointments came amid reports that Trump’s aides are divided about his choice for secretary of state, with some preferring 2012 Republican presidential nominee Mitt Romney, who harshly criticized Trump during the campaign, and others backing Rudy Giuliani, the former New York City mayor.

Officials said that after returning to New York, Trump will meet with several more potential cabinet picks on Monday, including John Allison, the former chief executive of BB&T Corp who has been mentioned as a possible choice for U.S. Treasury secretary, and Paul Atkins, a former commissioner of the Securities and Exchange Commission.