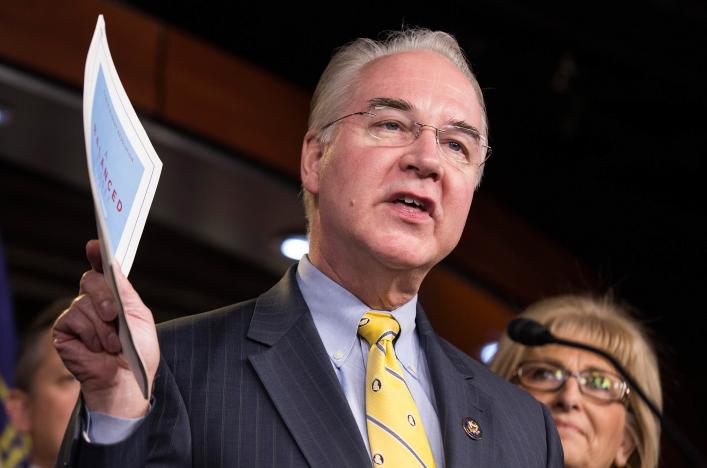 Republican U.S. Representative Tom Price, an orthopedic surgeon from Georgia, will be Trump's health and human services secretary, and Seema Verma, the founder of a health policy consulting company, will lead the Centers for Medicare and Medicaid Services, which is part of Health and Human Services and oversees government health programs for the poor and the elderly and insurance standards.

Trump, a Republican, also announced his choice on Tuesday of Elaine Chao, labor secretary under President George W. Bush, to serve as secretary of transportation, saying in a statement her expertise would be an asset "in our mission to rebuild our infrastructure."

The president-elect was expected as early as Wednesday to announce his selection of Goldman Sachs alumnus Steven Mnuchin as Treasury secretary, said a Republican source familiar with the decision.

Trump cast Price and Verma as a "dream team" to help him once he takes office on Jan. 20 with his campaign pledge to repeal Obamacare, the health law formally known as the Affordable Care Act. Since its enactment in 2010, it has been a target of Republican attacks.

Price has characterized Obamacare as "doing real harm to American families" and has co-sponsored legislation to replace it.

Chuck Schumer, the incoming Senate Democratic leader, was among the defenders of Obamacare who criticized Price's selection. "Nominating Congressman Price to be the HHS secretary is akin to asking the fox to guard the hen house," Schumer said.

Trump has said he will replace Obamacare with a plan to give states more control over Medicaid and allow insurers to sell plans nationally.

Both Price and Verma will need Senate confirmation. Congressional approval will be needed to repeal and change the health law.

White House spokesman Josh Earnest said on Tuesday that Obamacare expanded coverage to millions of Americans, boosted consumer protections and shored up the finances of the Medicare program for the elderly. "We'll see if Trump care measures up," he said.

Trump said after meeting with Obama following his Nov. 8 election victory that he would consider keeping the provisions of the healthcare law that let parents keep adult children up to age 26 on their insurance policies and that bar insurers from denying coverage to people with pre-existing medical conditions.

Price, an early Trump supporter in the U.S. House of Representatives who leads the budget committee, has proposed a plan that would create age-based tax credits for people who buy insurance coverage on their own.

House Majority Leader Kevin McCarthy said on Tuesday the eventual congressional plan to replace Obamacare would likely have much in common with Price's ideas.

Price's plan would also roll back the 2010 law's expansion of Medicaid for low-income people, a change that helped Obamacare cut the number of uninsured Americans to 29 million in 2015 from 49 million in 2010.

Trump vowed on the campaign trail to "save" Medicare, but Democrats said Price's plans could amount to privatizing the government program for the elderly. Price has endorsed converting Medicare from a program that covers set benefits to a voucher-style program to help people buy coverage.

"We say to Republicans who want to privatize Medicare: Go try it. Make our day," Schumer said on Tuesday, saying the change would be unpopular with the public.

Democrats also criticized the pick because Price has supported barring federal funds for Planned Parenthood, which provides some abortions in addition to birth control, health exams and other services.

Any major changes to health laws would have to come from Congress, but the new administration could in the meantime choose how to enforce existing provisions, such as by expanding exemptions for employers who do not want to cover birth control, said Gretchen Borchelt of the National Women's Law Center.

Trump's work to fill his administration was accompanied by a series of provocative tweets targeting efforts to recount the presidential vote, and on Tuesday, calling to make burning the U.S. flag a crime. The Supreme Court ruled in 1989 that flag burning is protected speech under the Constitution's First Amendment.

Trump has met with about 70 people as he looks to shape his White House and Cabinet team. Chao, his pick for transportation secretary, was the first Asian-American woman to hold a Cabinet position, as labor secretary. She is married to Republican Senate Majority Leader Mitch McConnell.

Trump saw retired General David Petraeus, a potential candidate for the State Department or the Pentagon, on Monday. On Tuesday, he planned to meet with Senator Bob Corker of Tennessee, chairman of the Senate Foreign Relations Committee, and former New York Mayor Rudy Giuliani, a transition official said. He will have dinner with Mitt Romney.

Romney, the 2012 Republican presidential nominee, Corker and Giuliani are all in the running for secretary of state.

Trump was also set to launch a "thank you tour" to states he won in the election, starting with a rally on Thursday in Cincinnati, aides said.