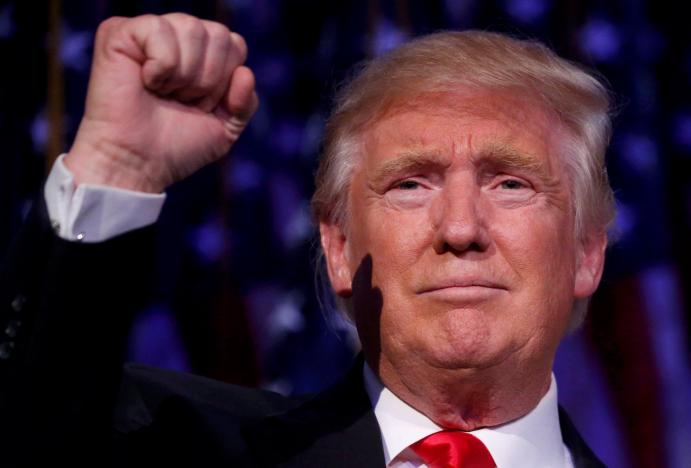 By Steve Holland and John Whitesides for Reuters —

A wealthy real-estate developer and former reality TV host, Trump rode a wave of anger toward Washington insiders to win the White House race against Clinton, the Democratic candidate whose gold-plated establishment resume includes stints as a first lady, U.S. senator and secretary of state.

Worried a Trump victory could cause economic and global uncertainty, investors were in full flight from risky assets such as stocks, and the U.S. dollar sank. In overnight trading, S&P 500 index futures fell 5 percent to hit their so-called limit down levels, indicating they would not be permitted to trade any lower until regular U.S. stock market hours on Wednesday.

The Associated Press and Fox News projected that Trump had collected just enough of the 270 state-by-state electoral votes needed to win a four-year term that starts on Jan. 20, taking battleground states where presidential elections are traditionally decided.

Trump, appearing with his family before cheering supporters in a New York hotel ballroom, said it was time to heal the divisions caused by the campaign and find common ground.

“It is time for us to come together as one united people,” Trump said. He praised Clinton for her service and said he had received a call from her to congratulate him on the win. “I will be president for all Americans.”

Trump had repeatedly slammed his campaign rival as “crooked” during their bruising campaign.

A short time earlier, Clinton campaign chairman John Podesta told supporters at her election rally in New York to go home. “We’re not going to have anything more to say tonight,” he said.

Victorious in a cliffhanger race that opinion polls had forecast was Clinton’s to win, Trump won avid support among a core base of white non-college educated workers with his promise to be the “greatest jobs president that God ever created.”

In his victory speech, he said he had a great economic plan and would double U.S. economic growth and embark on a project of renewal.

His win raises a host of questions for the United States at home and abroad. He campaigned on a pledge to take the country on a more isolationist, protectionist “America First” path. He has vowed to impose a 35 percent tariff on goods exported to the United States by U.S. companies that went abroad.

Both candidates, albeit Trump more than Clinton, had historically low popularity ratings in an election that many voters characterized as a choice between two unpleasant alternatives.

Trump, who at 70 will be the oldest first-term U.S. president, came out on top after a bitter and divisive campaign that focused largely on the character of the candidates and whether they could be trusted to serve as the country’s 45th president.

The presidency will be Trump’s first elected office, and it remains to be seen how he will work with Congress, even though Republicans were set to retain control of both chambers. During the campaign Trump was the target of sharp disapproval, not just from Democrats but from many in his own party.

Television networks projected Republicans would retain control of the U.S. House of Representatives, where all 435 seats were up for grabs. In the U.S. Senate, the party also put up an unexpectedly tough fight to protect its majority in the U.S. Senate.

Trump entered the race 17 months ago and survived a series of seemingly crippling blows, many of them self-inflicted, including the emergence in October of a 2005 video in which he boasted about making unwanted sexual advances on women. He apologized but within days, several women emerged to say he had groped them, allegations he denied. He was judged the loser of all three presidential debates with Clinton.

But a Reuters/Ipsos national Election Day poll offered some clues to the outcome. It found Clinton underperformed expectations with women, winning their vote by only about 7 percent, similar to President Barack Obama when he won re-election in 2012.

And while she won Hispanics, black and millennial voters, Clinton did not win those groups by greater margins than Obama did in 2012. Younger blacks did not support Clinton like they did Obama, as she won eight of 10 black voters between the ages of 35 and 54. Obama won almost 100 percent of those voters in 2012.

During the campaign, Trump said he would make America great again through the force of his personality, negotiating skill and business acumen. He proposed refusing entry to the United States of people from war-torn Middle Eastern countries, a modified version of an earlier proposed ban on Muslims.

His volatile nature, frequent insults and unorthodox proposals led to campaign feuds with a long list of people, including Muslims, the disabled, Republican U.S. Senator John McCain, Fox News anchor Megyn Kelly, the family of a slain Muslim-American soldier, a Miss Universe winner and a federal judge of Mexican heritage.

A largely anti-Trump crowd of about 400 to 500 people gathered outside the White House after his victory, many visibly in shock or tears. Some carried signs that read “stand up to racism” and “love trumps hate.”

Throughout his campaign – and especially in his acceptance speech at the Republican National Convention in July – Trump described a dark America that had been knocked to its knees by China, Mexico, Russia and Islamic State. The American dream was dead, he said, smothered by malevolent business interests and corrupt politicians, and he alone could revive it.

He offered vague plans to win economic concessions from China, to build a wall on the southern U.S. border with Mexico to keep out undocumented immigrants and to pay for it with tax money sent home by migrants.

As financial markets absorbed the prospect of Trump’s win during Tuesday evening and into the early hours of Wednesday, the Mexican peso plunged to its lowest-ever levels. The peso had become a touchstone for sentiment on the election as Trump threatened to rip up a free trade agreement with Mexico.

His triumph was a rebuke to Obama, a Democrat who spent weeks flying around the country to campaign against him, repeatedly casting doubt on his suitability for the White House. Obama will hand over the office to Trump after serving the maximum eight years allowed by law.

Trump promises to push Congress to repeal Obama’s troubled healthcare plan and to reverse his Clean Power Plan. He plans to create jobs by relying on U.S. fossil fuels such as oil and gas.

Trump’s victory marked a frustrating end to the presidential aspirations of Clinton, 69, who failed for the second time to be elected the first woman U.S. president.

In a posting on Twitter during Tuesday evening, she acknowledged a battle that was unexpectedly tight given her edge in opinion polls going into Election Day.

“This team has so much to be proud of. Whatever happens tonight, thank you for everything,” she tweeted.

The wife of former President Bill Clinton and herself a former U.S. senator, she held a steady lead in many opinion polls for months. Voters perceived in her a cautious and calculating candidate and an inability to personally connect with them.

Even though the FBI found no grounds for criminal charges after a probe into her use of a private email server rather than a government system while she was secretary of state, the issue allowed critics to raise doubts about her integrity. Hacked emails also showed a cozy relationship between her State Department and donors to her family’s Clinton Foundation charity.

Trump seized on the emails to charge that Clinton represented a corrupt political system in Washington that had to be swept clean.

Trump’s national security ideas, opposed by most of the elite voices across the political spectrum, have simultaneously included promises to build up the U.S.

military while at the same time avoiding foreign military entanglements.

He wants to rewrite international trade deals to reduce trade deficits. He has taken positions that raise the possibility of damaging relations with America’s most trusted allies in Europe, Asia and the Middle East.

He has promised to warm relations with Russia that have chilled under Obama over Russian President Vladimir Putin’s intervention in the Syrian civil war and his seizure of Ukraine’s Crimea region.

“Wouldn’t it be nice if we could get along with Russia?” he said at many rallies.

Previous Trump, Clinton run close in Ohio, Florida and elsewhere
Next World in shock as Trump surges to victory in U.S.