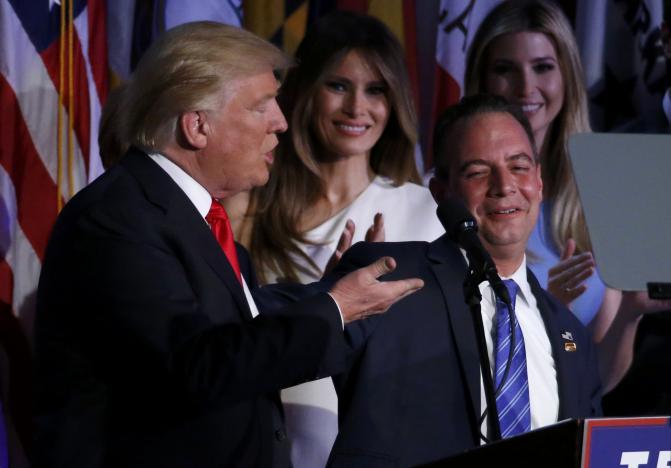 By Susan Cornwell and Alana Wise for Reuters | WASHINGTON — President-elect Donald Trump was weighing contenders for other top jobs in his administration after choosing Washington insider Reince Priebus as White House chief of staff and firebrand outsider Stephen Bannon as senior counselor.

Less than a week after his upset win over Democrat Hillary Clinton in last Tuesday’s presidential election, Trump’s choice on Sunday of Priebus, the Republican National Committee chairman and friend of House of Representatives Speaker Paul Ryan, could help him repair his strained relations with members of the Republican Party establishment.

But Trump also named Bannon, the combative former head of the right-wing website Breitbart News, as his strategist and senior counselor. The statement said Bannon and Priebus would be “working as equal partners to transform the federal government.”

The choice of each man could anger a segment of Trump’s supporters. Hardline Trump backers who were counting on Trump to keep his campaign promise to “drain the swamp” of business-as-usual Washington insiders may be disappointed he has named Priebus to the chief of staff position, which serves as a gatekeeper and agenda-setter for the president.

More traditional Republicans may be wary of the pick of rabble-rouser Bannon for a top White House job.

Trump, in a statement, said Bannon and Priebus were both “highly qualified leaders” who helped him win the White House race.

President Barack Obama, whom Trump will succeed on Jan. 20, plans to hold a news conference on Monday at 3:15 p.m. (2015 GMT) before leaving on an international trip. The Democratic president, who has pledged a smooth transition with Trump despite their sharp political differences, is sure to be asked by reporters about Trump’s appointments.

Since the election, Trump has softened one of his major campaign promises, the vow to build a wall along the U.S. border with Mexico. In an interview with the CBS program “60 Minutes” that aired on Sunday, Trump said he would accept fencing instead of a brick-and-mortar wall.

“But certain areas, a wall is more appropriate. I’m very good at this, it’s called construction, there could be some fencing,” the New York real estate developer said. In the “60 Minutes” interview, Trump also sought to play down the divisive nature of his candidacy and said Americans alarmed by his election had nothing to fear. “Don’t be afraid. We are going to bring our country back. But certainly, don’t be afraid,” he said.

The president-elect and his transition team must now turn to other key decisions, choosing members of his Cabinet and the heads of federal agencies.

Priebus is a longtime Wisconsin political operative who was credited with marshaling party resources for Trump’s White House bid.

Bannon could hardly be more different. He spearheaded Breitbart’s shift into a forum for the so-called alt-right, a loose online confederation of neo-Nazis and white supremacists. Over the past year, the website also repeatedly attacked the Republican Party establishment including Priebus’ friend Ryan, alienating many veteran Republicans.

The Breitbart attacks on Ryan continued even on Sunday, with an article denouncing Ryan’s Sunday comment on CNN that “we are not planning on erecting a deportation force.”

“Speaker Ryan is now telling voters that he will not enact a central part of Trump’s mandate,” the Breitbart article by Julia Hahn said.

In the “60 Minutes” interview, Trump said he would move to deport up to 3 million immigrants in the country illegally who have criminal records.

Demonstrators in major U.S. cities took to the streets for a fifth straight day on Sunday to protest against Trump.