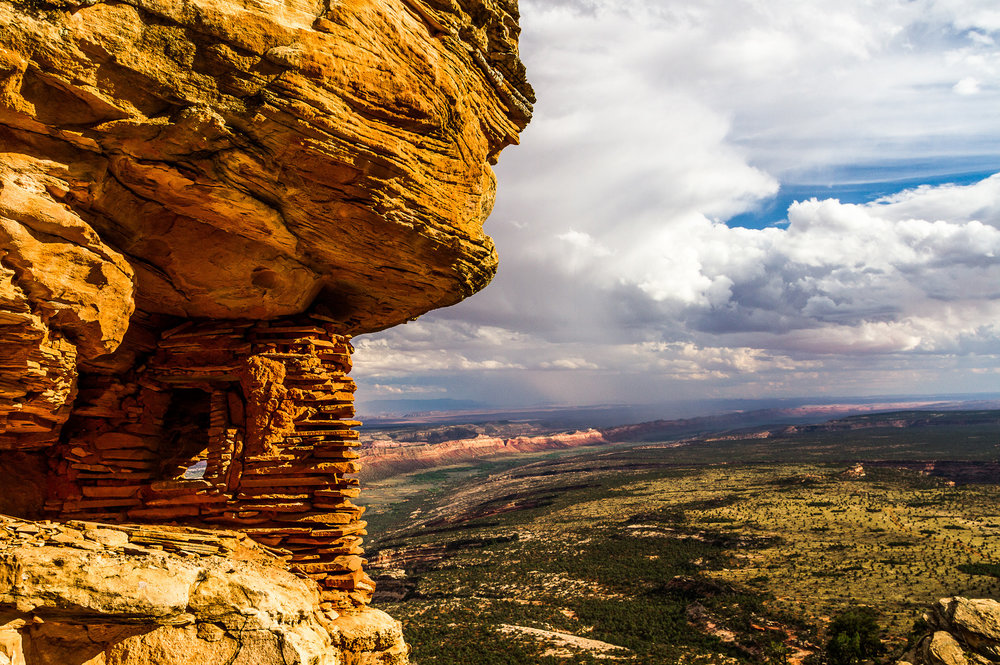 President Trump informed Sen. Orrin Hatch (R-Utah) Friday that he will shrink Bears Ears National Monument, a 1.35-million-acre protected area in southeast Utah that is prized by many tribal leaders but opposed by several state and federal Republican officials.

“I’m approving the Bears Ears recommendation for you, Orrin,” Trump told the senator in a phone call Friday morning, according to Hatch’s office, just before Hatch stepped onstage for an event on women in technology in Utah.

In late August, according to documents obtained by The Washington Post, Interior Secretary Ryan Zinke recommended paring back the boundaries of Bears Ears and asking Congress to make less-restrictive designations within it, “such as national recreation areas or national conservation areas.” The monument, which contains tens of thousands of cultural artifacts, has become the most prominent symbol of controversy surrounding the Antiquities Act of 1906.

In the report, Zinke proposed cutting the size of between four and six national monuments established by Trump’s predecessors and changing the way another six would be managed.

Former president Barack Obama designated the monument in December 2016, invoking his authority under the Act on the grounds that looting and recreational activities posed a threat to the ancient rock art and artifacts there.

The Salt Lake Tribune first reported the news of Trump’s call to Hatch. The Deseret News of Salt Lake City later reported that Trump would visit Utah in December to officially announce his decision.

Trump did not specify exactly how he would change the boundaries, according to Hatch spokesman Matt Whitlock, though Interior Department officials have privately indicated that the administration plans to shrink it by hundreds of thousands of acres.

“I was incredibly grateful the President called this morning to let us know that he is approving Secretary Zinke’s recommendation on Bears Ears,” Hatch said. “We believe in the importance of protecting these sacred antiquities, but Secretary Zinke and the Trump administration rolled up their sleeves to dig in, talk to locals, talk to local tribes, and find a better way to do it. We’ll continue to work closely with them moving forward to ensure Utahns have a voice.”

Native American tribal groups that supported the Bears Ears had the opposite reaction.

“I have to say we’re not surprised. We generally expected the president to make the wrong decision,” said Natalie Landreth, an attorney for three of the five Native American nations that petitioned the Obama administration to designate the monument, the Zuni, Hopi and Ute Mountain Utes.

Landreth said tribal leaders have a legal claim “ready to go” and could file it as soon as the president formally announces a decision. “We’re confident he doesn’t have the authority to do this. He can expect to be tied up in court for the next several years and ultimately fail,” she said.

The attorney general for the Navajo Nation also said its legal claim is prepared. Like the tribes represented by Landreth, it anticipated a decision against a monument when Zinke traveled to Utah and the Bears Ears site and met with tribal representatives for just one hour during a three-day trip.

“We’re going to work hard to defend Bears Ears,” said Ethel Branch, the attorney general. “I think the administration has no legal basis for this authority.”

Branch, who’s Navajo, said Bears Ears has a special importance for one of the largest tribes in the United States. “It’s the birthplace of our most prominent leaders. Our people have a close connection to the land. There are plants and minerals we utilize on a regular basis that we harvest from the site. It’s a unique repository for our tribal members,” she said.

The Navajo Nation covers 27,000 square miles in and around Utah, an area larger than Massachusetts. It’s made up of 110 local government units and regional councils represented by an elected president and other leaders. Though some individual members of the tribe opposed the monument designation, as Zinke and Utah officials have argued, the elected Navajo leaders and most members fully supported it, Branch said.

The Center for Western Priorities in Denver is one of many conservation groups that vowed to support the tribes in suing to block any changes to Bears Ears. “President Trump and his administration will stop at nothing to sell out America’s parks and public land,” said its deputy director, Greg Zimmerman.

“On the 159th birthday of Teddy Roosevelt, America’s greatest conservation president, President Trump and Interior Secretary Zinke are launching an unprecedented attack on Roosevelt’s legacy,” he said. “This foolish attempt to erase protections for Bears Ears . . . will meet immediate legal challenges, and it is destined to fail in court.”

Bruce Adams, a commissioner for San Juan County, where Bears Ears sits, told the Deseret News he welcomed Trump’s decision. County representatives unanimously opposed the monument designation and released a statement praising the president after hearing about the call to Hatch. “As a commission, we are thrilled that the years of meetings, countless hours of discussion and… advocacy has resulted in our local voices being heard by President Trump and Secretary Zinke,” said Adams.

Trump’s decision on Bears Ears comes as he is preparing to alter other monuments established by his predecessors. The White House is currently finalizing proclamations that would shrink both Utah’s Grand Staircase-Escalante, designated by President Bill Clinton, and Nevada’s Gold Butte, according to individuals briefed on the process who spoke on the condition of anonymity because no announcement has been made yet.

Trump is considering changing the proclamations for other national monuments as well, according to a senior administration official.

On Wednesday, Commerce Secretary Wilbur Ross submitted his own report on how to treat nearly a dozen marine national monuments and national marine sanctuaries, which was not released to the public.

A Commerce Department official said in an email that the report is in the final stages of interagency review, and will be released soon.

Interior officials have questioned some aspects of Commerce’s assessment, according to individuals briefed on the interagency process, including whether the department has overestimated the economic benefits of national monuments and marine sanctuaries, and underestimated comments Commerce received about the benefits of pursuing energy exploration in some areas. These individuals asked for anonymity because the report was still undergoing review.