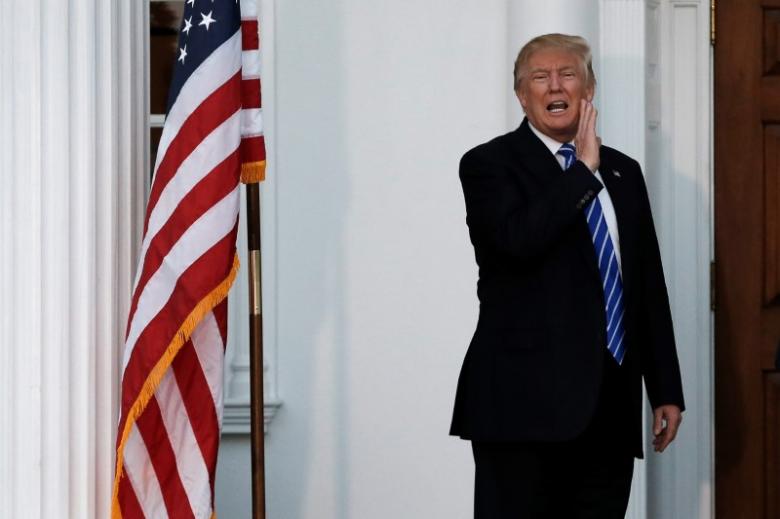 Trump says he will leave business to focus on running country

By Steve Holland and Doina Chiacu For Reuters| U.S. President-elect Donald Trump vowed on Wednesday to step back from running his business empire to avoid conflicts of interest, while turning to Wall Street for nominees for two key economic leadership posts who promised tax reform and a tougher approach to China.

Trump sent out a series of early morning tweets saying he will hold a news conference in New York on Dec. 15 with his children on how he will separate himself “in total” from his worldwide business holdings.

Mnuchin and Ross laid out Trump’s economic objectives, including a tax reform plan that would, among other things, cut corporate tax rates to 15 percent.

Mnuchin and Ross said lower tax rates would be offset by reductions in the number of income tax deductions.

“We’ve been doing a lot of dumb trade,” Ross said.

Mnuchin said the Treasury and Commerce departments have trade enforcement capabilities. With regard to China’s foreign exchange policy, he said, “If we determine we need to label them as a currency manipulator that’s something the Treasury would do.”

FOCUS NOW ON SECRETARY OF STATE

Trump also is working to fill out his foreign policy team, with a major focus this week on who his secretary of state should be.

He dined with a former rival, 2012 Republican nominee Mitt Romney, at a French restaurant near Central Park on Tuesday night. Romney, held in suspicion by Trump supporters because of his harsh criticism of Trump, made an impassioned statement in support of Trump after their meal.

A variety of critics have raised questions about how Trump would avoid a conflict of interest between the presidency and a real estate empire with properties around the world.

“I will be holding a major news conference in New York City with my children on December 15 to discuss the fact that I will be leaving my great business in total in order to fully focus on running the country in order to MAKE AMERICA GREAT AGAIN!” Trump said.

Trump said he is not required by law to alter his relationship with his business, but added: “I feel it is visually important, as president, to in no way have a conflict of interest with my various businesses.”

“Hence, legal documents are being crafted which take me completely out of business operations. The Presidency is a far more important task!”

Three days after Trump won the presidential election on Nov. 8 the Trump Organization said it was looking at business structures aimed at transferring management control to Trump’s three oldest children.

Clearly reluctant to give up a business that made him a brand name around the world, Trump also had previously argued that he had no need to separate himself from the Trump Organization.

But criticism has mounted. An analysis by the New York Times, published last Saturday, said Trump’s companies have business operations in at least 20 countries.

The Wall Street Journal said in a Nov. 17 editorial that Trump should liquidate his assets in order to avoid any appearance of a conflict.