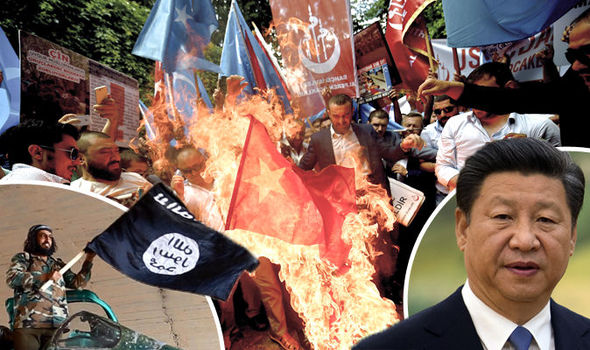 Trump meets with Uighurs in afront to China

U.S. President Donald Trump, who has made religious freedom a centerpiece of his foreign policy, met on Wednesday with victims of religious persecution from countries like China, Turkey, North Korea, Iran and Myanmar.

Trump counts evangelical Christians among his core supporters and the State Department is hosting a conference on the topic this week that will be attended by Vice President Mike Pence and Secretary of State Mike Pompeo.

Four of the 27 participants in the Oval Office meeting were from China, the White House said: Jewher Ilham, an Uighur Muslim; Yuhua Zhang, a Falun Gong practitioner; Nyima Lhamo, a Tibetan Buddhist; and Manping Ouyang, a Christian.

Ilham told Trump her father was one of many Uighurs “locked up in concentration camps” in the Xinjiang region and that she had not spoken with him since 2017.

The Trump administration has been weighing sanctions against Chinese officials over the treatment of the Uighurs, including the Communist Party chief of Xinjiang, Chen Quanguo, but has so far held back amid Chinese threats of retaliation.

Reuters reported in May that the U.S. administration was considering sanctions on Chinese video surveillance firm Hikvision over the country’s treatment of its Uighur minority, citing a person briefed on the matter.

Nearly two dozen nations at the U.N. Human Rights Council this week urged China to halt persecution of ethnic Uighurs in Xinjiang, where U.N. experts and activists say at least 1 million are held in detention centers.

The Chinese government has traditionally rejected any suggestion that it abuses religious rights and human rights.

Also present at the meeting were Rohingya Muslims from Myanmar, the White House said. On Tuesday, Pompeo announced sanctions against Myanmar military’s Commander-in-Chief Min Aung Hlaing and other leaders it said were responsible for extrajudicial killings of Rohingya in 2017, barring them from entry to the United States.

Trump’s ambassador for religious freedom, Sam Brownback, said during Wednesday’s meeting that the administration would announce “additional measures” on religious freedom at the State Department meeting on Thursday.

Among the other victims who met with Trump were Christians from Myanmar, Vietnam, North Korea, Iran, Turkey, Cuba, Eritrea, Nigeria, and Sudan; Muslims from Afghanistan, Sudan, Pakistan and New Zealand; Jews from Yemen and Germany; a practitioner of Cao Dai from Vietnam; and a Yezidi from Iraq.

By The Levant - 60 mins ago
Russia said on Tuesday it was investigating the torture of Russian soldiers held prisoner in Ukraine and recently released as part of a prisoner swap with Kyiv in late June.  The Russian Investigative Committee, which probes major crimes, said in a statement that it was "verifying facts of inhuman treatment of Russia soldier prisoners in […]
Read story