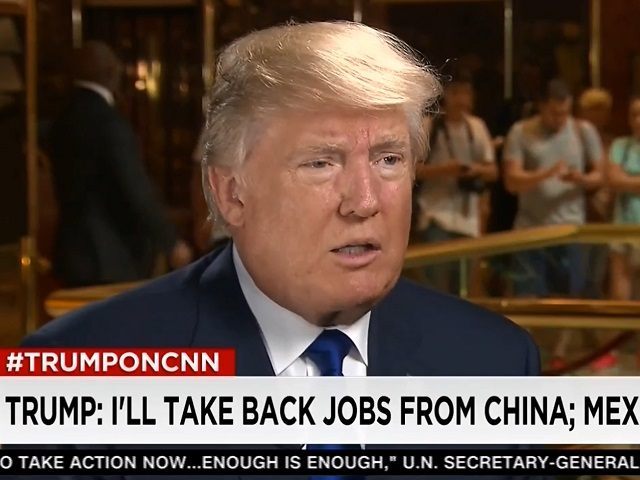 Trump Hits China With Tariffs On $50 Billion Of Goods; China Says It Will Retaliate

President Trump is enacting a 25 percent tariff on $50 billion of Chinese goods "that contain industrially significant technologies," after months of exchanging threats amid concerns over a potential trade war.

U.S. Customs and Border Protection will begin to collect tariffs on the first $34 billion worth of Chinese imports on July 6. A second set of imports subject to tariffs is still under review.

The White House had set a June 15 deadline for announcing the full list of items that will see a tariff imposed, focusing on areas of China's industry such as aerospace, robotics and machinery. Released today, the list includes some 1,100 products.

"My great friendship with President Xi of China and our country's relationship with China are both very important to me. Trade between our nations, however, has been very unfair, for a very long time. This situation is no longer sustainable. China has, for example, long been engaging in several unfair practices related to the acquisition of American intellectual property and technology."

China has threatened to retaliate forcefully for any tariffs, listing U.S. products that range from sorghum, soybeans, meat and whiskey to airplanes and cars.

China buys some $14 billion in U.S.-produced soybeans every year — nearly a third of the American crop.

The Chinese commerce ministry issued a statement on Friday accusing the U.S. of being fickle and short-sighted, and warning that a trade war between the two economic giants would have global repercussions.

It's the latest round of tariffs imposed by the Trump administration, which hit U.S. allies Mexico, Canada and the European Union with a round of taxes on steel and aluminum imports in May. Trump cited the interests of national security as the motivation behind that move.

"That's where our trading partners and the rest of the world are just very frustrated and very confused because tactics change on a day to day basis. Tactics aren't as uniform as a strategy. And that's what has our trading partners so unnerved. This will be a disappointment for China. China will retaliate and we will be at the beginning of a very nasty trade war if we proceed with this today."

The American tariffs will come in two phases, the U.S. Trade Representative's office said on Friday, with the tariff on some $34 billion worth of Chinese imports set to take effect on July 6.

"The list does not include goods commonly purchased by American consumers such as cellular telephones or televisions," the U.S.T.R. office said.

A second list, which ranges from chemicals and plastics to motorcycles and technical equipment worth some $16 billion, is made up of proposed items — and will not be finalized until after a public hearing.

Trump first mentioned the tariffs in March; since then, the White House has sent mixed messages on the plan – and it has also sent envoys to China and received Chinese representatives as the two countries' trade and finance officials negotiated.

As he made the U.S. tariffs official, Trump said that "if China engages in retaliatory measures, such as imposing new tariffs on United States goods, services, or agricultural products," his administration would impose new tariffs in response.

The dispute has played out as businesses, farmers and consumers watch to see which of the products they rely on could be affected by a trade war. The U.S.T.R. says that after it asked for public comment on its initial list of 1,333 products that were proposed for the additional duty in April, it received some 3,200 responses.

After news of the American tariffs broke on Friday, National Association of Manufacturers President and CEO Jay Timmons released a statement calling for a bilateral trade agreement.

"Manufacturers certainly have concerns that tariffs will cause more problems than they solve, but we also recognize that the administration may intend to use them as a negotiating tactic to bring China to the table and achieve larger goals," Timmons said. "A trade war never benefits anyone, so rather than pursuing a piecemeal tariffs approach, now is the time to seize the opportunity before us and work toward a U.S.– China trade agreement that will benefit American workers for generations to come."

Progress to avert a back-and-forth of new import taxes seemed to be made in late May, after China agreed to cut tariffs on U.S. automobiles, and Trump pledged support for ZTE, a Chinese company affected negatively by U.S. sanctions, as NPR's Camila Domonoske reported.

As for the Trump administration's efforts to prevent the burgeoning China from establishing dominance in some industries, Gutierrez told NPR on Friday, "I think it's an ironic goal. You know, we are the world's greatest free market. We have espoused the benefits of capitalism, of free trade, of open markets to the whole world. We've asked them to reach, we've told them it's good for their people. And now China wants to be a major player."

The White House announced the tariffs one day after Secretary of State Mike Pompeo visited Chinese President Xi Jinping in Beijing for talks that were described as focusing on Trump's recent meeting with North Korean leader Kim Jong Un.