By Sarah N. Lynch and David Lawder | WASHINGTON  — Top aides to President Donald Trump demurred on Sunday over where U.S. policy on Syria was headed after last week’s retaliatory missile strike, leaving open questions about whether removing Syrian leader Bashar al-Assad from power was now one of Trump’s goals.

After the United States launched cruise missile strikes on a Syrian air base alleged to have launched a deadly poison gas attack on Syrian civilians, Trump administration officials said they were prepared to take further actions if necessary.

Trump’s United Nations ambassador, Nikki Haley, said the United States had “multiple priorities” in Syria and that stability there was impossible with Assad as president.

“In no way do we see peace in that area with Assad as the head of the Syrian government,” Haley told NBC’s “Meet the Press.”

“And we have to make sure that we’re pushing that process. The political solution has to come together for the good of the people of Syria,” she said.

Her comments appeared at odds with those of Secretary of State Rex Tillerson, who said the U.S. missile strike was aimed solely at deterring the use of chemical weapons by Assad.

“There is no change to our military posture” in Syria, Tillerson said on ABC’s ‘This Week’ program.

Tillerson said the U.S. priority in Syria was defeating Islamic State, the militant group also known as ISIS. Once ISIS is defeated, the United States could turn its attention to trying to help bring about a “political process” that could bring about stability in Syria, he said. 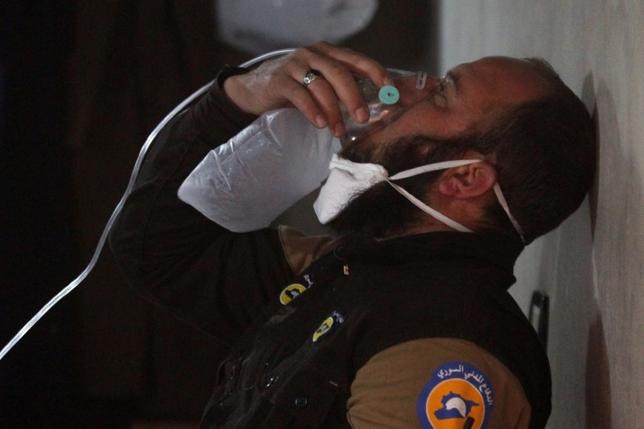 A civil defence member breathes through an oxygen mask, after what rescue workers described as a suspected gas attack in the town of Khan Sheikhoun in rebel-held Idlib, Syria April 4, 2017. REUTERS/Ammar Abdullah

“It is through that political process that we believe the Syrian people will … be able to decide the fate of Bashar al-Assad,” Tillerson said.

A White House official, speaking on condition of anonymity, said any difference in nuance was inadvertent and unintentional, and declined to comment further.

During the 2016 presidential campaign, Trump said defeating Islamic State was a higher priority than persuading Assad to step down. The Republican criticized calls by his Democratic opponent, Hillary Clinton, for the establishment of a no-fly zone and “safe zones” to protect non-combatants.

“What we should do is focus on ISIS. We should not be focusing on Syria,” Trump told Reuters in an interview last October.

Tillerson on Sunday blamed Russia for enabling the poison gas attack by failing to follow through on a 2013 agreement to secure and destroy chemical weapons stockpiles in Syria.

“The failure related to the recent strike and the recent terrible chemical weapons attack in large measure is a failure on Russia’s part to achieve its commitment to the international community,” he added.

Russia swiftly condemned last week’s attack. On Sunday, a joint command center comprised of Russian, Iranian and militia forces supporting Assad said it would respond to any new aggression and increase its support for its ally.

Trump ordered the missile strikes on the Syrian air base after blaming Assad for the chemical weapons attack, which killed at least 70 people, many of them children, in the Syrian town of Khan Sheikhoun. The Syrian government has denied it was behind the assault.

On whether Assad should be removed from power, McMaster said: “We are not saying that we are the ones who are going to effect that change.

“What we are saying is other countries have to ask themselves some hard questions. Russia should ask themselves, ‘What are we doing here?'” McMaster said.

Lawmakers from both the Democratic and Republican parties were supportive of Trump’s decision to attack the Syrian air base, but some Republican senators said they were concerned about the lack of policy clarity and Tillerson’s strategy of leaving Assad’s fate unresolved while concentrating on Islamic State.

“There seem to be a difference in what Ambassador Haley is saying, that Assad has no future, and what I heard this morning from Secretary Tillerson,” Republican Senator Marco Rubio told ABC, adding that Tillerson’s strategy won’t work.

“There is no such thing as Assad yes, but ISIS no,” Rubio said.

Republican Senator Lindsey Graham, speaking on NBC’s “Meet the Press,” said removing Assad from power would require the United States to commit thousands more troops to the country to create safe-haven areas for the opposition to regroup, retrain and ultimately take control of the country.

“You tell the Russians, ‘If you continue to bomb the people we train, we’ll shoot you down,’ Graham said.