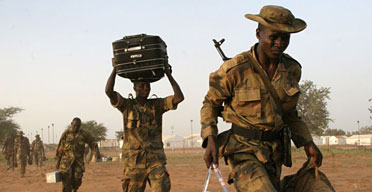 The death toll in a new tribal conflict in Sudan rose to 130 on Monday as clashes in West Darfur spread south.

At least 47 people were killed in South Darfur after 83 died and tens of thousands were displaced in West Darfur in the previous two days. It was the worst violence since a peace agreement last October raised hopes of an end to years of war.

Sudan has been undergoing a fragile transition since the removal from power of dictator Omar Bashir in April 2019 after mass protests against his rule.

The new bloodshed followed the end of the joint UN-African Union peacekeeping mission in Darfur on Dec. 31.

The aid group Save the Children warned: “In the chaos, we fear many children will have been separated from their parents, and will now be at risk of exploitation.” Its Sudan country director Arshad Malik said the many wounded had overwhelmed health centers, and injured and dying people were lying on the floors and corridors of hospitals.

“We call on all parties to the violence in West Darfur to lay down their arms immediately, before the situation gets out of control,” he said.

Authorities in Khartoum said they had sent a delegation to contain the situation. The UN secretary-general’s spokesman Stephane Dujarric urged them to “bring an end to the fighting.”