Breaking News
Home / Celebrity / Trending: Monica Lewinsky calls out publication for uninviting her to philanthropic event because of Bill Clinton

Trending: Monica Lewinsky calls out publication for uninviting her to philanthropic event because of Bill Clinton

The Levant May 10, 2018 Celebrity, News, United States Leave a comment

Town & Country uninvited Monica Lewinsky from an event because Bill Clinton was attending and Lewinsky (rightfully) called them out. dear world:
please don’t invite me to an event (esp one about social change) and –then after i’ve accepted– uninvite me because bill clinton then decided to attend/was invited.
it’s 2018.
emily post would def not approve.

@MonicaLewinsky, tweeting about Town & Country magazine uninviting her from its annual philanthropic summit because former President Bill Clinton, with whom she had an affair in the ’90s, was going to be speaking. Lewinsky said the late manners and etiquette writer Emily Post “would def not approve.”

‘Backstreet’s back’ … as the Spice Girls, uh, Spice Boys. I REALLY need to know where Kevin got those heels for his Posh Spice costume. And how he knows how to walk in them!

A college student had her scholarship taken away because of her ‘dreamer’ status. A few days ago, she graduated.

When my school discovered I was undocumented, my scholarship & in-state tuition were taken away. I told my papi that I was going to drop out & work instead. My papi told me he’d cut his arm off before I dropped out. We made it work. Today I graduated & he’s why. #undocugrad pic.twitter.com/RwDuOe5xaF

@camilaronipizza, recounting how the University of South Florida revoked her scholarship and in-state tuition after discovering she was an undocumented immigrant (though her DACA paperwork was submitted). Camila Silva thought she’d have to drop out, but her parents took on more work to cover the costs.

A woman working to better herself and work hard in this country is no less of an American than me. America should be gladly supporting immigrants like this. https://twitter.com/camilaronipizza/status/992637641517649920 … Mitch McConnell trolling Don Blankenship has me excited for all the other pettiness and toxicity of this year’s midterms. https://twitter.com/team_mitch/status/994036999387537409 …

@PhillyD, reacting to a taunt from Senate Majority Leader Mitch McConnell, R-Ky., to Don Blankenship, a Senate candidate in West Virginia’s GOP primary. Blankenship lost, and McConnell’s team shared a Photoshop of McConnell in white powder, in a reference to the series “Narcos.” It read, “Thanks for playing, Don” — a rebuttal to Blankenship calling him “Cocaine Mitch.” 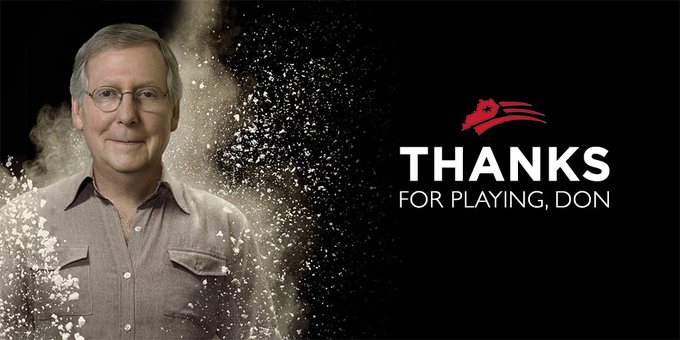 this is the first funny thing a conservative has ever made

UN investigators want US to sanction MBS over Khashoggi report

A U.N. human rights investigator said on Monday that it was “extremely dangerous” for the …