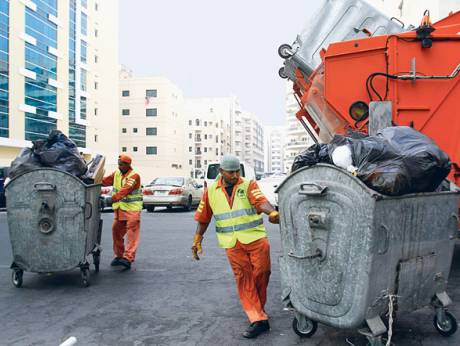 Transport companies to pass on waste disposal fees to clients

Dubai is gearing up to implement new waste disposal fees on companies transporting and dumping rubbish in landfills and treatment plants.
The waste transport companies say the fee will then be passed on to their clients generating waste as “pay-as-you-throw fee”.
On Sunday, Dubai Municipality organised a customer forum with the waste collection and transport companies to announce details of the implementation system of the waste disposal fees — which will come into effect from May 17.
Officials from the Waste Management Department informed the companies that they will have to register a bank account with the municipality for deducting the waste disposal fee every time their trucks dump the rubbish at municipal facilities.
Though officials did not provide the amount to be deposited by these companies, company representatives told Gulf News that this will range between Dh3,000 to Dh500,000 per month — depending on the operations of the companies.

Dubai Municipality has announced the new waste disposal fees, above. A system of automatic payment system has also been announced.
“It will be a heavy burden on companies to pay this fee in advance,” said the business development manager of a company.
“We are already struggling to get payment from our clients. Sometimes they take months to pay us. How am I going to generate money in advance for making payments to the municipality?” he lamented.
Representatives of several companies told Gulf News that they would be passing on the new fees to their clients.
Their clients include managements of commercial establishments such as food and beverage outlets, factories, public and private institutions, building contractors as well as residential communities and freehold properties.
They said their contracts with their clients will have to be amended to add the new fees.
“Eventually, it will go to the end user generating waste. Our clients will take it from their tenants or guests as their service fees for waste collection,” said a senior executive of a prominent company.
Company representatives said this will eventually become a “pay as you throw” waste fee since the new fees are based on the weight of the rubbish going to the landfills and treatment plants.
Municipality officials who addressed the queries and concerns of the transport company representatives said the civic body would not interfere in their contracts with their clients.
However, they said the main purpose of implementing the fees is to encourage waste reduction and segregation at source and recycling.
While general municipal waste will be charged Dh80 per tonne, they pointed out that the same will be charged only Dh50 if separated as recyclables (Dh20) and organic waste (Dh30).
Officials said they are hopeful that communities and commercial establishments will promote waste segregation and recycling once the new fees will come into effect.
The officials also reassured that residential areas from where the municipality is currently collecting waste will be exempted from the fees. These include areas where Emiratis live in villas.
The municipality is yet to take a decision on how to implement the new fee from areas served by private companies under the My City, My Environment initiative, they said.
These are about 16 residential areas where the municipality has outsourced the waste collection and disposal service to private companies.
Transport companies were also told that they must use RFID tags on their trucks transporting waste which will be scanned at the smart gates of landfills and treatment plants. Each tag will cost Dh300, company representatives said.